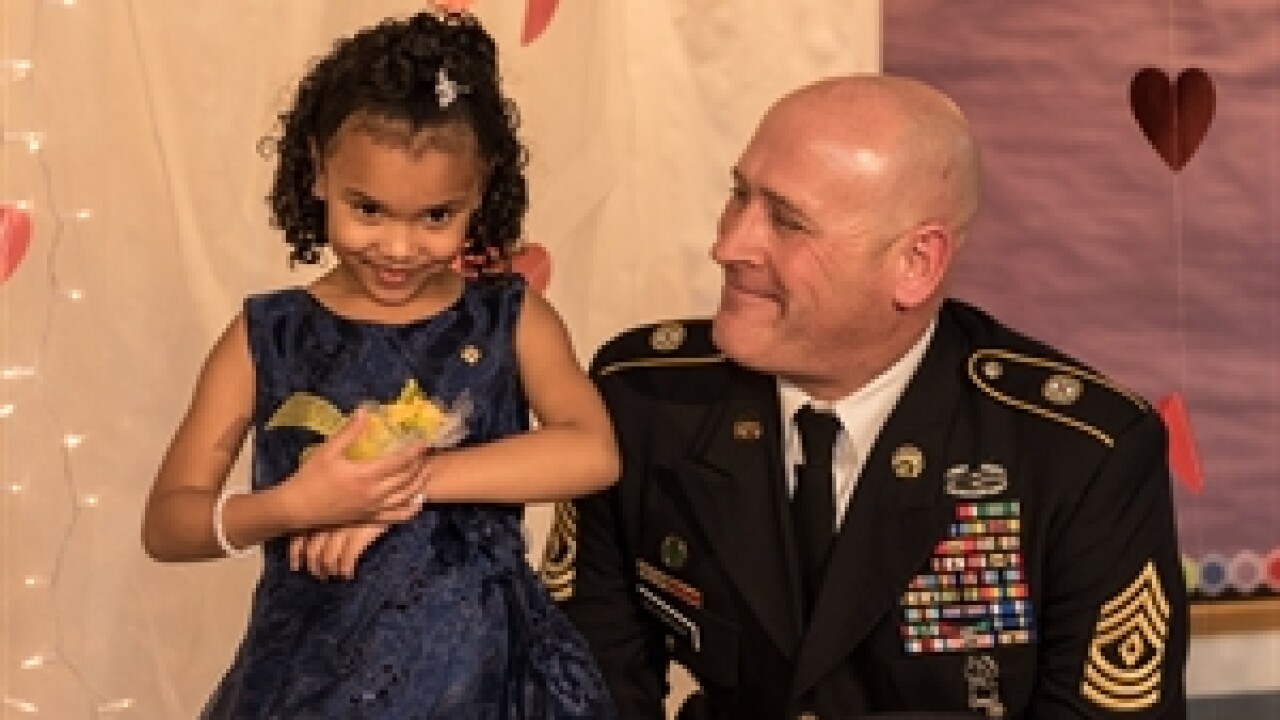 1st Sgt. Joseph Bierbrodt of Sheridan, Illinois, with the 933rd Military Police Company, smiles at Cayleigh Hinton just before escorting her into the father-daughter dance at the Our Lady of Humility School in Beach Park, Illinois, Feb. 7., Cayleigh’s father, Sgt. Terrence Hinton, died in a training accident May 14, 2017 in Hawaii. Beirbrodt along with Cayleigh and her family were taken to the dance in a limo escorted by the Patriot Guard, multiple nearby police departments and fire departments. (Photo by Staff Sgt. Robert R. Adams) And was provided by the National Guard.

SPRINGFIELD, Ill. – 1st Sgt. Joseph Bierbrodt knows the importance of a father-daughter dance, which is why he was so honored to take a Gold Star daughter to her first one.

Bierbrodt, a father of four, has daughters of his own that he’s taken to dances. And one day, the Illinois National Guardsmen was requested to escort Cayliegh Hinton to her first dance.

“When I received the request to do this, it touched me,” said Bierbrodt. “This is something I felt needed to be done. Military is family to me and as a family we need to be there for each other.”

He pulled out all the stops for the daughter of the deceased Sgt. Terrence Hinton, who died in a training accident when he was traveling in a military truck that overturned after it spun out of control and hit a guard rail.

Cayleigh’s mother, Jillian Hinton, described her daughter as “daddy’s little girl.” She said Cayliegh father would have been so excited to see Cayleigh in her dress.

“He (Terrence) loved doing school activities with Cayleigh. He would have loved to take her to a father-daughter dance,” said Jillian. “We wish he could be here today, but we know that he is looking down on us and loves us.”

Bierbrodt formally asked Cayleigh to the dance when he arrived at her home with a six-foot tall stuff dog and a limousine to take them both to the dance.

“Cayleigh looks absolutely beautiful tonight and she is priceless,” said Bierbrodt at the dance. Cayleigh told  National Guard officials that the day was very special to her because everyone was celebrating her dad.

“When your five years old everything happens in moments,” said Cayliegh’s mother. “I have seen her get excited over and over again tonight and that’s what make me so happy. I’m so thankful for all of this.”

Before Sgt. Hinton died, he served two tours. He deployed to Afghanistan in 2010 and Kuwait in 2014 for a total of 21 months.