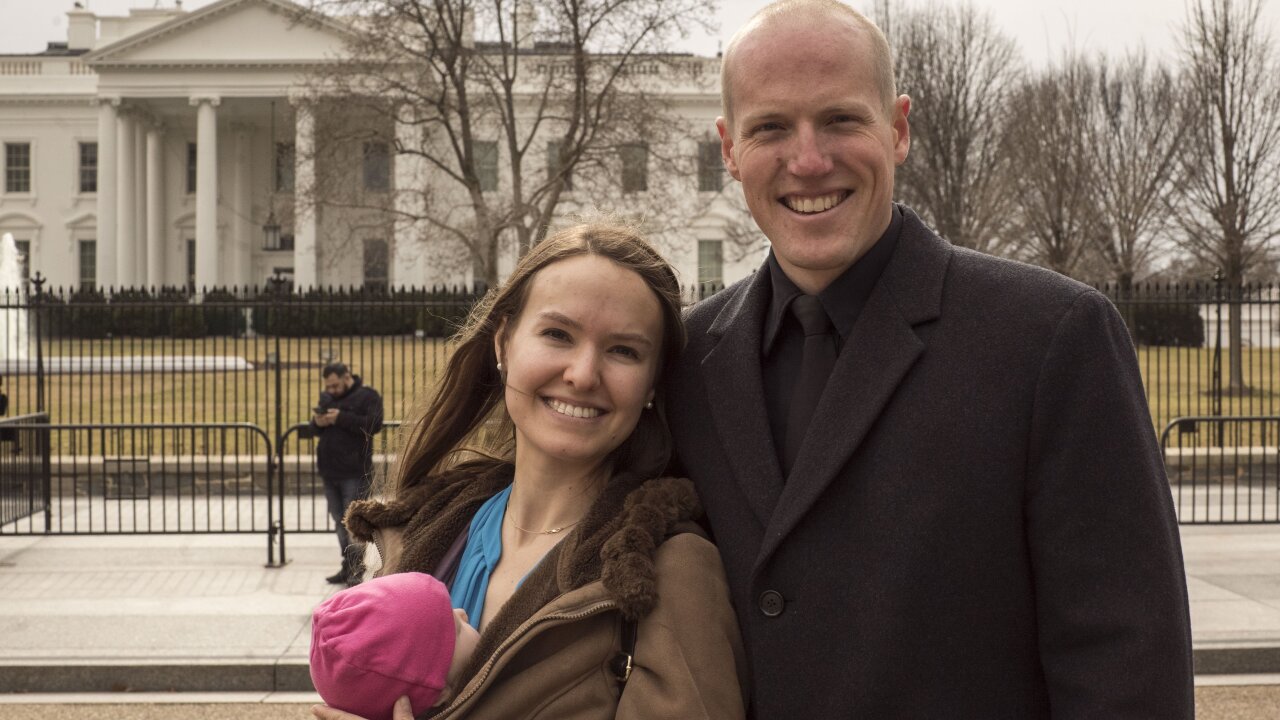 Rebecca and Ryan Holets and their new baby Hope visited the White House on Monday.

When police Officer Ryan Holets shared the riveting and unlikely story of how his family last year adopted a baby born to a homeless woman addicted to heroin, he could not imagine that his story also captured the eyes of the White House.

The next chapter in this story that garnered worldwide attention will bring the Holets family to Washington as first lady Melania Trump’s guests at the State of the Union address on Tuesday night. White House spokeswoman Sarah Sanders on Monday named Holets, along with several others, as people who “represent the unbreakable American spirit.”

“We have entered the twilight zone for sure,” Holets recently reflected as he tried to grasp the magnitude of bringing his New Mexico family to a high-profile stage.

The Trump administration hopes to use the Holets family’s story to highlight its efforts in fighting opioid abuse across the country.

Holets’ mission is more humble and a message to help change the country’s view of those trapped in the grips of addiction and homelessness.

“It’s changed my perspective forever,” the officer said. “I can’t drive anywhere without noticing people that are homeless. I can’t help but notice people that are panhandling. Then I think about everything they’ve gone through.”

On September 23, Officer Ryan Holets was training a young officer on the streets of Albuquerque. They responded to a possible theft at a convenience store. That call turned out to be a false alarm, but as Holets was leaving the scene he spotted a homeless couple sitting on a patch of grass appearing to be injecting themselves with some kind of drug.

Holets flipped on his body camera and walked up to the pair holding a needle, and that’s when he noticed that the woman, Crystal Champ, was pregnant. It turned out she was eight months’ pregnant. Holets was stunned and heartbroken.

“Why do you have to be doing that stuff?” Holets can be heard saying to Champ in the body camera footage. “It’s going to ruin your baby. You’re going to kill your baby.”

Champ, 35, immediately breaks down into tears. Champ says heroin and crystal meth, at that moment, had absolute control over her life.

“I’m the first one to know how bad my situation is,” Champ told CNN. “I know what a horrible person I am.”

Holets says a crazy idea started to bloom in his mind. A voice, he says, told him to offer to adopt the unborn child and that’s what he did. Holets says he showed Champ a picture of his family, which included his wife, Rebecca, and four young children.

“I’ve gotten so tired of seeing so many situations where I want to help but can’t,” Holets told CNN. “And in that moment, I realized I had a chance to help and to heck with the risks.”

The Holets say they see many in the world around them who desperately need stability.

“We feel God has called us to do that,” Rebecca Holets said. “It’s been on our hearts for a while.”

Crystal Champ and the baby’s father, Tom Key, agreed to have the Holets family adopt the baby. Hope, a girl, was born on October 12.

In December, an interventionist came to Albuquerque to convince the couple to leave the streets behind and seek treatment. The rehab team arrived at the airport with the couple, but the grip of heroin and drug addiction was so strong that they both unraveled inside the airport and refused to get on the flight.

But a week later, Crystal and Tom left their life in Albuquerque and checked into the Mending Fences rehabilitation center in Florida.

The road to recovery will be long and uncertain, but Ryan Holets and his family say they vow to support Hope’s birth parents every step of the way.