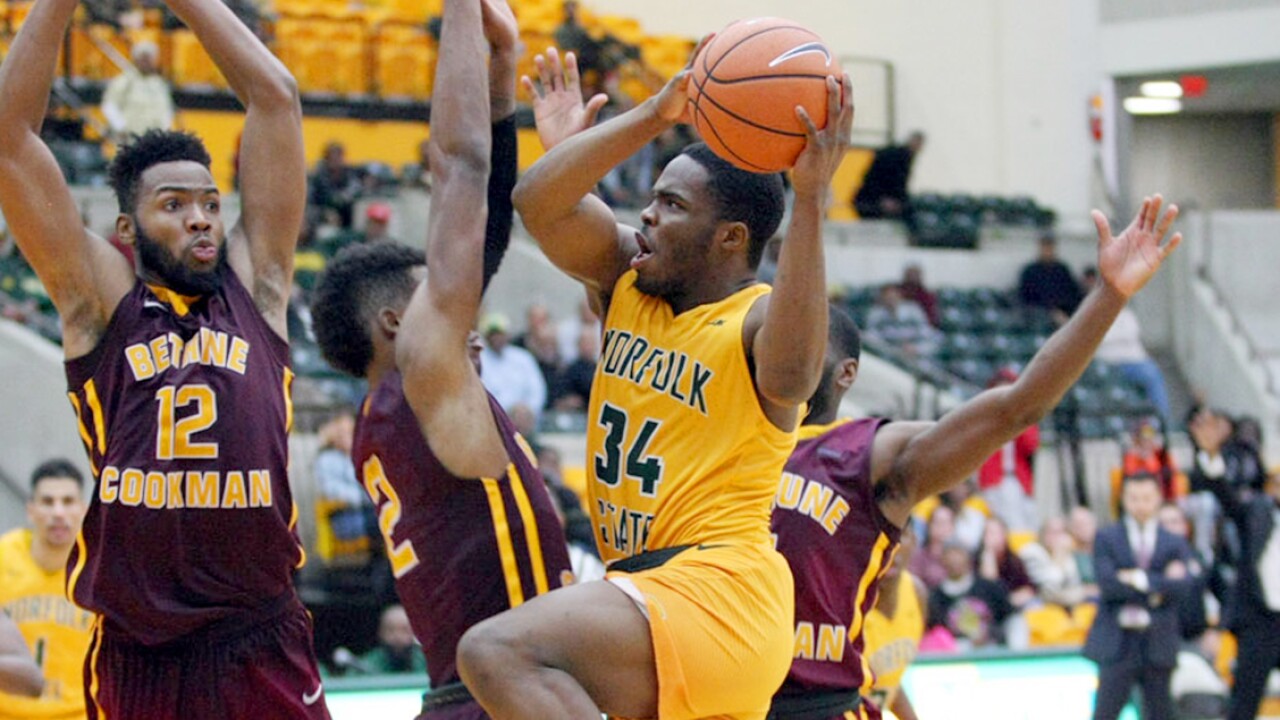 NORFOLK, Va. (NSU Sports) – Sophomore Steven Whitley hit a shot off the glass at the buzzer to give the Norfolk State men’s basketball team a 71-70 win over Bethune-Cookman on Saturday evening at Joseph Echols Hall.

The Spartans handed the Wildcats, the last unbeaten in the MEAC, their first conference loss of the season in dramatic fashion. The game featured 19 lead changes, including 15 in the second half alone and six in the last 1:21 of the contest.

After getting the ball with 5.3 seconds left, Whitley drove from the top of the key down the left side of the floor. He put up a left-handed attempt from approximately six feet out near the left baseline.

The ball left his hand just before the buzzer sounded to give the Spartans their first last-second win in six years.

The shot capped a game in which the teams combined for less than 35 percent shooting. Despite the lack of efficient offense, the second half turned into a wild, back-and-forth affair. It started with the Wildcats (11-10, 5-1 MEAC) holding a seven-point lead at the break.

The Spartans (5-16, 3-3 MEAC) scored seven of the first eight points of the second half, and 3-pointers by senior Kyle Williams and junior Derrik Jamerson Jr. kept the game close until sophomore Nic Thomas made a pair of free throws for a 43-42 advantage at the 12:14 mark, NSU’s first lead since the 7:33 mark of the first half.

Thomas’ second shot from the charity stripe was the first of five straight scores that changed the lead each time. Neither team led by more than three until B-CU used a 7-0 run to pull ahead by six, 60-54, with 5:48 left. Whitley’s 3-point play, however, capped an immediate 8-0 run during a minute and a half span that gave the Spartans a 62-60 advantage.

Whitley nailed a long two-pointer with 47 seconds left before Isaiah Bailey made a pair of free throws at the other end after NSU was called for a flagrant foul with 45.8 seconds left. The Wildcats maintained possession but could not convert, and senior Preston Bungei was eventually fouled with 17.5 seconds left.

His two free throws gave the Spartans a 69-68 lead, but Brandon Tabb got fouled with 8.4 seconds on the other end. After he made both, and NSU called timeout with 5.3 seconds left, Whitley provided his last second heroics.

Tabb and Shawntrez Davis each led the Wildcats with 18 points. Davis added eight rebounds, and Diakite totaled 11 points with 17 boards. B-CU had a slight advantage in points in the paint, 34-22.

Early in the game, it was the Wildcats who seized momentum first. They scored eight straight early in the game for the first significant lead for either team, 15-9, six minutes in. The Spartans countered with a 9-2 run, as layups by Whitley and Long put them ahead, 18-17, with seven and a half minutes to go in the opening stanza.

Tabb’s third 3-pointer of the half gave B-CU the lead back, but freshman Mastadi Pitt’s 3-point play closed the gap to one a little more than two minutes later. The Wildcats ended up scoring 9 of the last 12 points of the half, however, to take a 35-28 lead into the break.

NSU will host the other MEAC Sunshine State school, Florida A&M, on Monday at 8 p.m.?