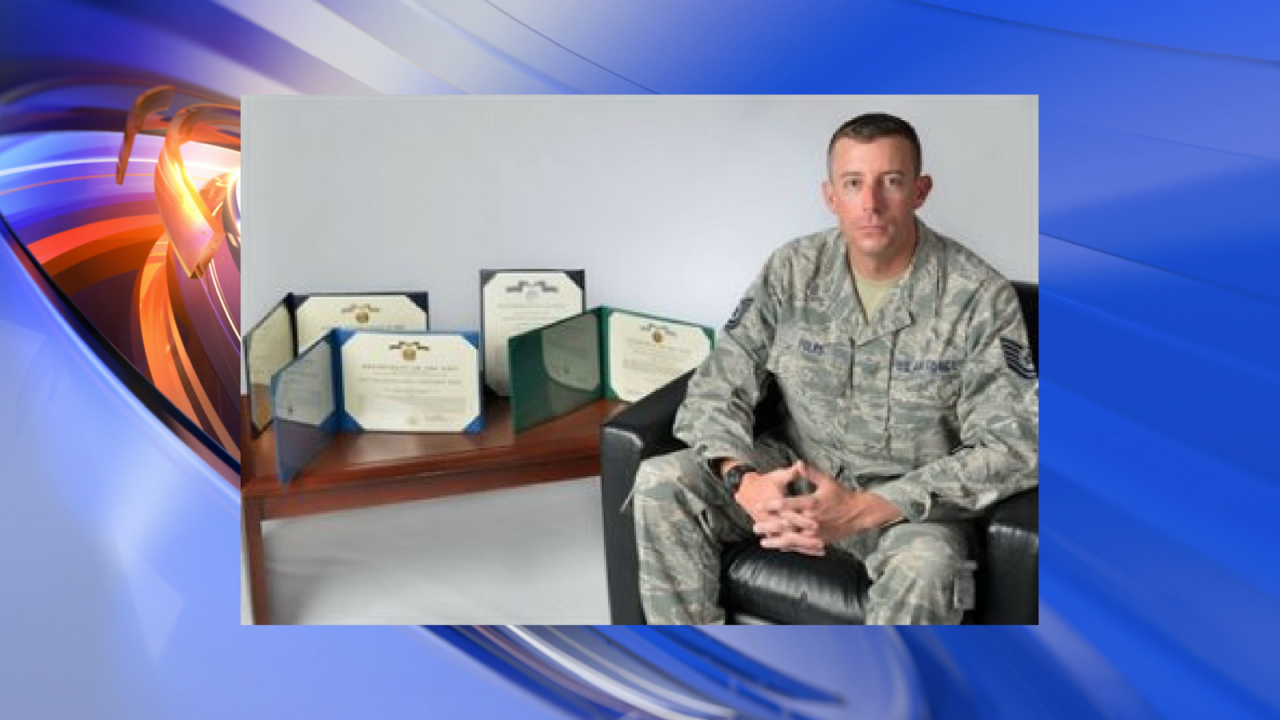 JOINT BASE LANGLEY-EUSTIS, Va. – A life of service to his country, and wanting to help others, has yielded one Airman awards from four branches of the U.S.

It all started when Air Force Tech Sgt. Ryan Folks, who spoke with the U.S. Department of Defense about his military career,  was part of the Coast Guard.

He spent his first four years aboard the U.S. Coast Guard Cutter Chase in San Diego as a firemen working with steam engine ships.

“I started working as a mechanic’s assistant, but we were called firemen or firemen apprentice. It dates back to the days of steam engines; it was our job to keep the fire going,” Folks said. “I knew I wanted to do something medical, but there was a two-year wait, then they closed the school.”

Even though his dream of a medical profession were not to working out right away, Folks was recognized for his hard work and received the Coast Guard Achievement Medal. But this stop in the Coast Guard was only a stepping stone for a man who would end up leading other military medical personnel.

While the Coast Guard brought him to San Diego, his love for a girl would take him else where. And being a full-time military person herself, Folks decided to follow his future wife to Massachusetts.

This is where Folks, who always wanted to do something that pertained to the medical field, was exposed to military training to be a corpsman.

After training at Camp Lejeune, Folks was sent on an 8-month-long tour to the Middle East.

During his deployment he worked with different branches of the armed forces to provide waterside security to high-value assets and cargo ships going in and out of the port, as well as seeing patients out of the clinic.

“I was the only Coast Guard corpsman that went with my unit and they primarily had me work out the clinic,” Folks said. “They also needed a medic to provide medical coverage for the waterside security team, so with my law enforcement background, they said, ‘Folks, you’re our guy.’”

During this time is when the Navy recognized Folks for his job and commitment to duty overseas.

Folks, who spent already ten years in the Coast Guard and had started a family of his own, decided to step away from the military. He went back to school to become a nurse while also caring for his daughter.

Part of the reason for his stepping away was because of his family and not wanting to have to leave them for another deployment, while his wife was finishing her military schooling in San Diego.

“[My wife was also an] active-duty military member and it was becoming hard for us both to be co-located without one of us being gone all the time,” Folks said. “She was tasked to go to school in San Diego and I knew if I was to follow her, I’d be deployed right away. I decided it was my time to go back to school.”

Part of what would bring Folks back to the military though was the love for his family and the drive to help others in need.

It was a Saturday morning in his college biology class where a call from his wife would reaffirm his call to duty.

His daughter had been knocked unconscious during a playground incident, and when rushing to the scene of his daughter’s injury, Folks realized how thankful he and his family were to have quality and caring first responders helping them.

After thanking those first responders, and getting a tour of their fire station, Folks regained the desire to be apart of a unit that helps other.

“This experience kind of rejuvenated my love of wanting to help people again,” said Folks. “I wanted to be like the guys that were there for my family; I want to be able to do that for somebody one day.”

Folks also admitted that part of what he also missed was just being able to wear the uniform.

With his wife’s military career bringing his family to Virginia, Folks decided to join the Virginia Air National Guard.

The already ten-year veteran had to start over with training and schooling, after learning that a lot of what he had learned would not transfer with him to the East Coast. Folks had also been taking EMS classes while out west.

While Folks stayed the course, his commitment to his country, family and those he wanted to help grew.

When an opportunity to deploy overseas came up, the now noncommissioned officer in-charge of a squadron medical element, decided to go. His persistence in the Air National Guard also led to a fulltime medical position with the 192nd Medical Group.

“The opportunity arose to deploy, [and] around this time my wife decided that being married to me and juggling two careers wasn’t working out,” Folks said. “It is what it is. It’s been my driving force now.”

Folks enjoyed working with those who were his junior, and helping them learn. He also enjoyed having a more hands-on role with the care of patients while on tour.

“Having just served with Tech. Sgt. Folks while deployed, I got to witness his professionalism and work ethic, firsthand,” said Air Force Lt. Col. Michael Schaner, commander of the 149th Fighter Squadron. “He is absolutely the best of the best, as you can’t beat his vast experience in multiple services, positive attitude in everything he does and willingness to put the team before himself.”

The Army also gave him an achievement medal when he got back from duty.

“Your time in the military is really what you make of it,” said Folks.