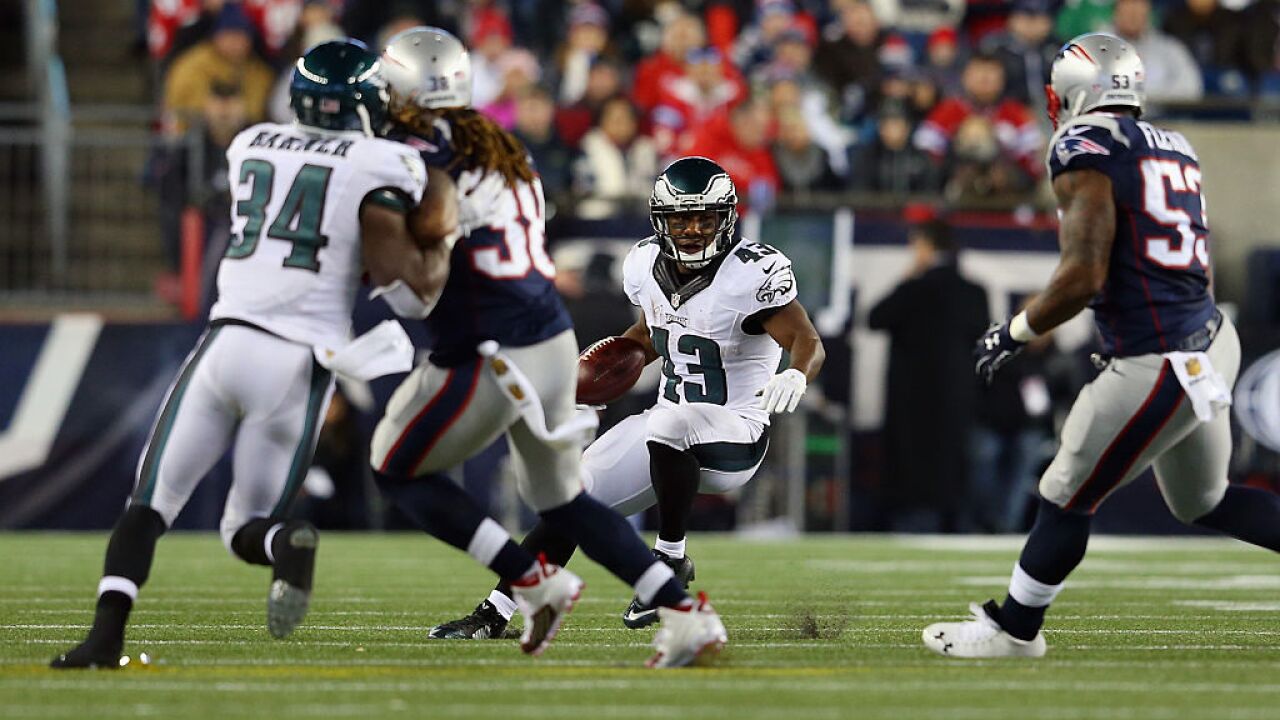 FOXBORO, MA – DECEMBER 06: Darren Sproles #43 of the Philadelphia Eagles runs with the ball during the game against the New England Patriots at Gillette Stadium on December 6, 2015 in Foxboro, Massachusetts. (Photo by Jim Rogash/Getty Images)

Tom Brady and Bill Belichick have the opportunity to win their sixth Super Bowl together.

But getting back there wasn’t easy for the defending champions.

It started earlier in the week, when Brady suffered an injury to his right hand — his throwing hand — during a handoff in practice while preparing for Sunday’s AFC championship game against the Jacksonville Jaguars. The hand required stitches, and Brady acknowledged that he wasn’t sure on Wednesday if he could play.

Another hurdle was the opponent. The Jaguars had a 20-10 lead early in the fourth quarter at Gillette Stadium on Sunday. But Brady orchestrated another New England comeback, throwing a 4-yard touchdown pass to Danny Amendola with 2:48 left, giving the Patriots a 24-20 win.

“It’s just been an unbelievable run, and I think everyone should be really proud of what we accomplished,” the 40-year-old Brady said. “This is a different team than last year’s team. It didn’t look good at 2-2, and you just keep showing up to work every day, and we sit in these chairs and Coach Belichick gets up here and he demands a lot out of us and he tries to get the most out of us every day. It’s not always great.

“Sometimes it’s pretty average and then you’re just trying to get better and better and get to the point where you can make the fourth quarter of a game and try to play well enough to get yourself into the next one. So, just proud of our team, proud of what we accomplished.

“It’s pretty amazing and proud of this team, great leadership and it’s just been a great year. It’d be really great if we take care of business in a couple weeks, so we’ll see.”

New England will face the Philadelphia Eagles, who blew out the Minnesota Vikings 38-7 at Lincoln Financial Field in Philadelphia. This will be the Eagles’ third Super Bowl appearance in franchise history, the last of which was a 24-21 loss to Brady, Belichick and the Patriots in Super Bowl XXXIX.

Nick Foles, who has filled at Eagles quarterback since starter Carson Wentz suffered a torn ACL during the regular season, threw for 352 yards with three touchdowns. He is trying to become the first backup quarterback to win a Super Bowl since Brady did it in the 2001 season.

“I haven’t even had time to really comprehend what is going on, to be honest,” Foles said. “I don’t know if I ever will.”

Philadelphia is listed as the underdog heading into the Super Bowl, which is February 4 in Minneapolis, but that’s nothing new for the Eagles. They’ve embraced the role and, despite being the No. 1 seed in the NFC, the Eagles weren’t favored in the divisional round against the Falcons and the NFC championship game against the Vikings.

In response, some of the players wore dog masks after their win against Atlanta, inspiring fans to get their own. The masks were brought out again Sunday after routing Minnesota.

Still, questions remain for the favorites: Will Patriots tight end Rob Gronkowski, who left Sunday’s AFC title game with a head injury, be cleared to play? Will Brady’s hand heal in time?

There may be an answer to the latter. Brady said he hopes to have the stitches removed from his hand this week.

“I think as soon as I get the stitches out, then I think it will be good to go,” he said.