During a hepatitis A emergency, there’s a nationwide shortage of vaccine 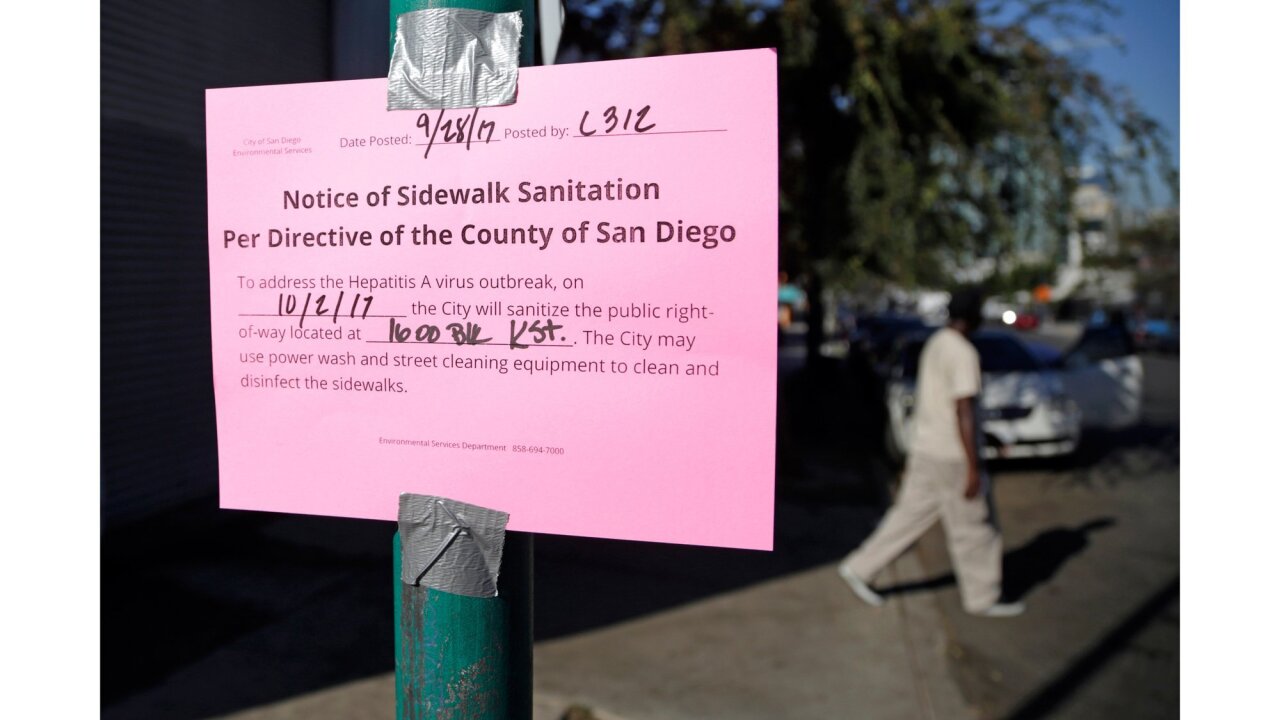 **This image is for use with this specific article only.** A national shortage of Hepatitis A vaccine is hindering efforts to combat outbreaks.

The battle against hepatitis A outbreaks across the US is being stymied by a national shortage of the vaccine needed to combat it.

“Current supply is not sufficient to support demand for vaccine,” the US Centers for Disease Control and Prevention said in a written statement.

Southeast Michigan has seen 495 cases of hepatitis A and 19 deaths, mostly in Macomb and Wayne counties and in Detroit. The outbreak began in August 2016, and after a drop off during the winter, has been climbing since February of this year, said Michigan Department of Health and Human Services spokesperson Angela Minicuci.

“We have a limited supply of vaccine,” Minicuci said, “so we are prioritizing delivery to high-risk populations.”

In California an outbreak of the virus has sickened at least 644 people and claimed 21 lives, mostly in the cities of San Diego, Santa Cruz and Los Angeles, according to the CDC.

Persons infected with the virus there have also spread it to Arizona, Utah and Colorado, said Dr. Wilma Wooten, public health director at San Diego’s Health and Human Services Agency.

To manage the current shortage, the CDC said, staff have been working closely with public health officials to target vaccinations toward at-risk populations, as well as coordinating with vaccine manufacturers “to monitor and manage public and private vaccine orders to make the best use of supplies … during this period of unexpected increased demand.”

“It’s unprecedented what we are seeing out of California and other parts of the country,” GlaxoSmithKline spokeswoman Robin Gaitens said. “The shortage is simply an issue of supply and demand.”

Outbreaks of hepatitis A are normally small; rates have declined 95% since the vaccine became available in 1995. GlaxoSmithKline and Merck are the only companies approved by the Food and Drug Administration to sell a Hepatitis A adult or pediatric vaccine in the US.

“We typically provide 1.2 million adult doses each year to the US market, and the demand this year has vastly surpassed the supply on hand,” Gaitens said. She stressed there is no shortage of the pediatric version, which is given in a two-dose series about six months apart. Nor is there a shortage of their combination hepatitis A/B vaccine.

The current outbreaks of hepatitis A, virus genotype IB, is normally not found in the US; it’s more common in the Mediterranean, Turkey and South Africa. However, the current vaccine is effective against all strains of the virus.

In an emailed statement, Merck said it has been taking steps to increase the manufacturing capacity of both their adult and pediatric versions of their vaccine due to “unexpected demand in markets.”

“At the end of October, we began shipping single-dose vials (in packages of 10 vials) for adults, which previously had been on backorder,” the statement said. “We anticipate the availability of adult and pediatric pre-filled syringes of the vaccine in the first quarter of 2018.”

GlaxoSmithKline also began shipping backordered single-dose syringes at the end of October, Gaitens said, adding that the company is working closely with the CDC and California officials on “how to distribute and to ensure the vaccines are actually going to where there is the greatest need.”

What is hepatitis A?

Hepatitis A is a highly contagious liver disease caused by the HAV virus. The virus is found in the feces of people with the disease, and is most frequently transmitted by eating food or drinking water handled by someone who has not properly washed their hands. It’s also transmitted by sex and by illicit drug use.

Some of the most common symptoms include nausea, vomiting, fever, fatigue, loss of appetite and jaundice, or yellowing of the skin or eyes. It can take 15 to 50 days to show symptoms of the infection; however, an infected person is most contagious during the two weeks before their skin turns yellow.

According to the CDC, the hepatitis A virus is very hard to kill and can live for months outside the body. Hand sanitizers are not effective against the virus, so frequent hand washing is critical to controlling any outbreak.

California is in the middle of the biggest person-to-person outbreak of hepatitis A since the vaccine first became available in the mid-90s, according to the California Department of Public Health.

San Diego has been hardest hit, with 546 confirmed cases and 20 deaths as of November 14, the latest numbers released by the County of San Diego Health and Human Services Agency.

Cases were first seen in November 2016 and in March officials determined they were dealing with an outbreak. It has spread predominantly among the homeless and drug users in the city, said agency spokesperson Craig Sturak. Homelessness is a year-round problem for San Diego, he added, and accompanying issues of sanitation helped fuel the spread.

“We’ve focused on a couple of different strategies,” said Sturak. “A large vaccination effort—we’ve vaccinated over 100,000 people — and the city is doing a big clean up by power-washing streets and cleaning up trash in areas where the homeless are congregating.”

Despite the current shortage, Public Health Director Wooten said her agency has had enough vaccine on hand to deliver a first dose to most of the estimated 150,000 at-risk population in the San Diego area.

“With an outbreak you want to get those first doses into the arms of as many people as possible as fast as possible,” said Wooten “At that point they will be 90% to 95% protected. It’s the second dose that takes you up to 100% protection.”

Wooten said the county had planned to start a campaign soon to administer the second dose, but delayed the program until spring due to the shortage. But she stressed that nurses out in the at-risk community are administering the additional dose if they come across anyone who requires it.

“We’re also targeting those who fall under the CDC guidelines, such as the MSM, or men having sex with men population, or anyone who currently has hepatitis B or C,” Wooten said. “We have access to 15,000 doses for the month of November to meet that need, and if we need additional doses in December we will ask the state for those as well.”

California’s outbreak led Governor Jerry Brown to declare a state of emergency in mid-October. The declaration allowed the state to “immediately purchase additional vaccines directly from manufacturers and coordinate distribution to people at greatest risk in affected areas.”