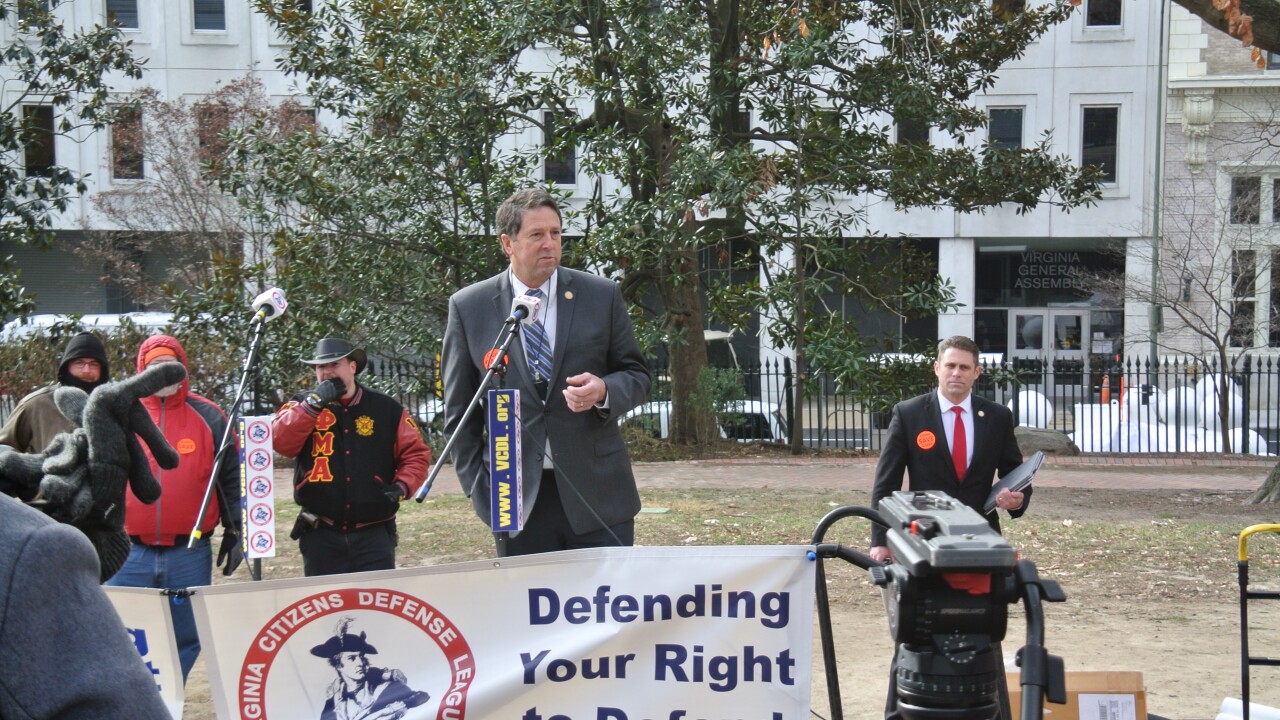 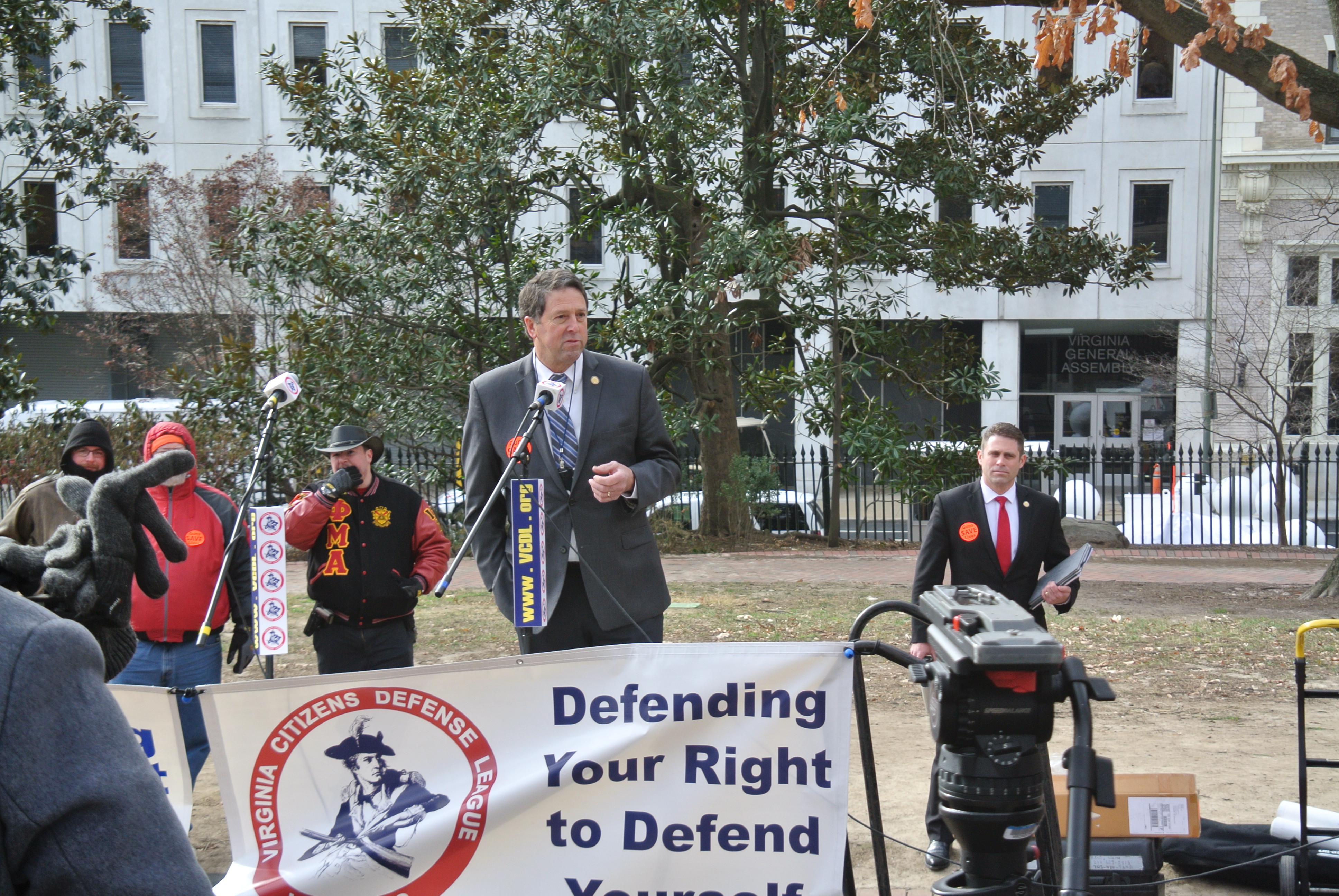 RICHMOND – Demonstrators for and against gun control held rallies on the Capitol grounds Monday, highlighting an issue that has sharply divided Republicans and Democrats.

U.S. Rep. Dave Brat and several fellow Republicans held a rally in the morning in support of the Second Amendment and the expansion of gun rights.

“I’m not going to take away your Second Amendment rights,” said Dick Black, a state senator and Vietnam veteran from Loudoun County, “when I’m standing here alive because I had a rifle when I needed it.”

“Over 1,000 individuals lose their lives each year in Virginia to gun violence and accidents – more than will die in motor vehicle accidents,” said newly inaugurated Gov. Ralph Northam. “Why don’t we all stand up and say ‘enough is enough?’”

The Virginia Citizens Defense League started its rally at about 11 a.m. at the Bell Tower on Capitol Square. One of the attendees was Cesar Inong, Jr., a mortgage loan assistant from Springfield in Northern Virginia.

Inong said he thinks restrictions on guns should be loosened for law-abiding citizens to protect themselves from muggers and other attacks.

“Over years and years, gun laws have become stricter and stricter, but the issues that coincide with anti-gun laws are increasing – issues including shootings,” Inong said.

At the rally, several Republican politicians, including Del. Dave LaRock of Loudoun County, spoke in support of gun rights.

“There’s a bill that if somebody swore an oath that if you were a danger to yourself, before you go to court or anything they can come in your house and take your guns away for a couple of weeks,” Van Cleave said. “You’re guilty before you’re innocent.”

Speakers at the rally said restrictions on obtaining a concealed weapons permit hurt minorities and lower-income residents who may live in high-crime neighborhoods. Another vulnerable group is victims of domestic violence.

Elizabeth Baran, a nurse from Maryland, said she was nearly beaten to death by her ex-boyfriend.

“I called the police when he would break into my home. They could do really little other than writing a report,” Baran said. “After a failed suicide attempt on his part, he came to my home and broke in and decided that was the day I was going to die.”

She described being raped and beaten and having her head slammed repeatedly into the cement, leaving her with a brain injury that would end her career as an emergency room nurse.

“After a very long and difficult process in Maryland, I was able to obtain my unrestricted wear-and-carry permit in Maryland,” Baran said. “I want people to be able to understand that being able to own and carry a firearm can sometimes be truly a life-and-death situation.”

In the afternoon, the Virginia Center for Public Safety held a vigil for victims of gun violence and then met with legislators, urging them to support bills such as one requiring background checks before all gun purchases.

The center’s rally was held only hours after Republicans on a Senate committee killed that bill and 19 other proposals to restrict firearms.

At the vigil, Northam, Lt. Gov. Justin Fairfax and Attorney General Mark Herring reaffirmed their commitment to gun safety laws. They were joined by religious leaders and activists to send one message: The fight is not over.

“This morning, the legislature had an opportunity to take some concrete steps to make our communities safer, to make our families safer, by passing better laws,” Herring said. “And what happened? They were all defeated partially, if not all of them, on a party-line vote.”

“We are not going to allow what happened today in the legislature deter us,” he said. “I promise you this … we will win this fight.”

Northam told the crowd that his concerns about the proliferation of firearms come from his experience as a physician in the Army.

Kris Gregory, 58, from Falls Church, attended the event. She organized a traveling vigil made of T-shirts representing the 32 victims killed at the Virginia Tech massacre in 2007. She said she liked what the legislators had to say about the future of gun regulation in Virginia.

“[I’m] delighted to have strong advocacy for sensible gun laws,” Gregory said. “We knew it was not going to be easy. This is a marathon, not a sprint, but we have a great deal of hope and the country is with us.”

By Christopher Wood and Adam Hamza