When kids lose hair, wigs transform them into princesses, superheroes 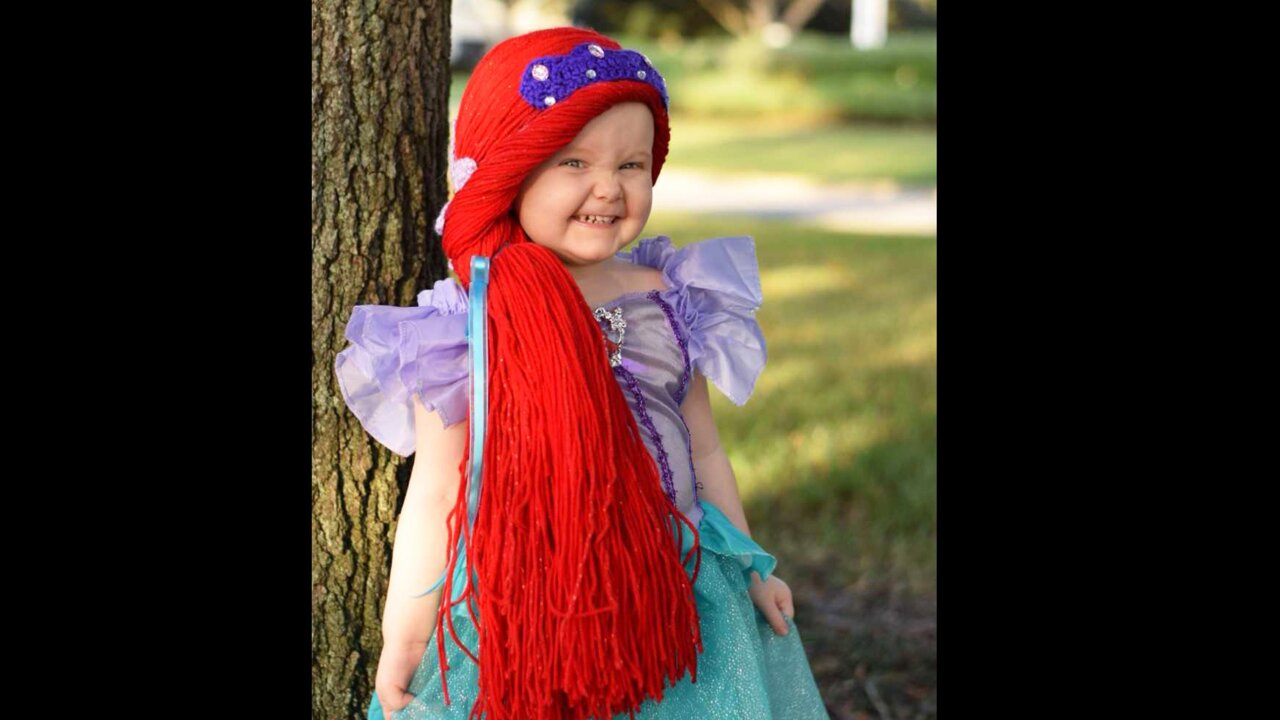 Violet is 2 1/2 years old. Over the summer, she was diagnosed with acute lymphoblastic leukemia. Her mother discovered the Magic Yarn Project right as Violet was losing her hair. Now, she enjoys wearing an Ariel wig with her matching dress. 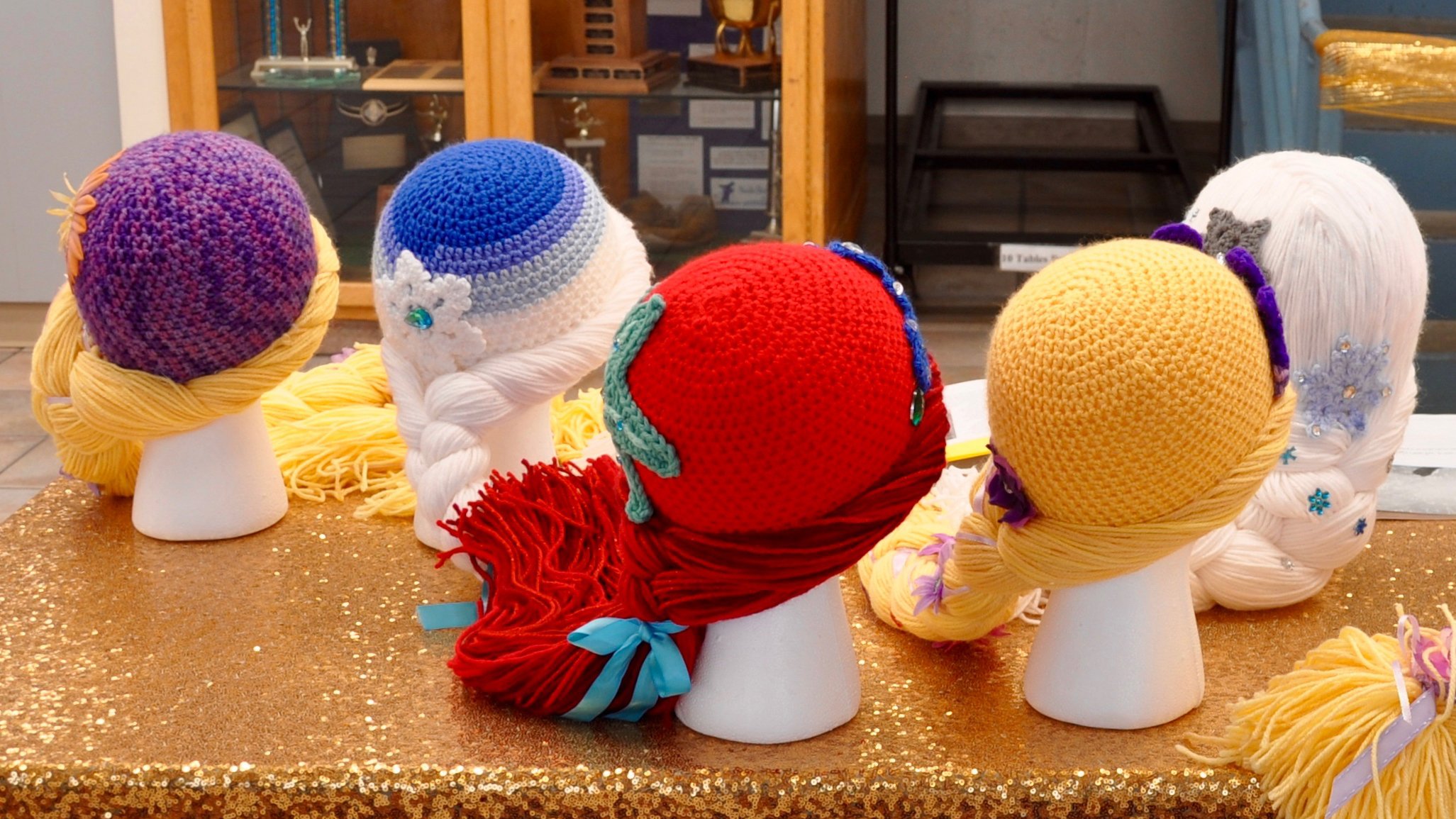 Maiya Lima was only 5 years old when her mother noticed a small bald patch on the back of her head. More patches began to appear in the weeks and months that followed in 2015.

Her mother, Emmanuela Lima, was anxious, but Maiya’s doctor advised patience. By September 2015, half of Maiya’s long, thick hair had fallen out.

Blood tests came back normal. Topical steroids did nothing to help regrow her hair. The family got a second opinion from another doctor, who thought it may have been related to her nervous system or the overuse of antibiotics that helped fight previous respiratory infections.

In October and November, her eyelashes and eyebrows disappeared. After her 6th birthday, in December, Maiya lost the last of her hair. Emmanuela said it was the hardest thing she’d ever been through.

Maiya was diagnosed with alopecia totalis, an autoimmune disease with no cure. Though it’s possible that her hair may grow back one day, there has been very little growth since her diagnosis. She recently turned 8.

“It’s been a hard journey,” Lima wrote in an email. “People staring really used to make her sad, or children pointing and commenting. She thought her hair would grow back and I think in a way, she still does. She walks around the majority of the time with her beautiful bald head on full display!”

Wearing headbands has helped Maiya feel “girly,” her mother said. But Lima found something even better when she discovered the Magic Yarn Project through an alopecia group on Facebook.

The Magic Yarn Project is a nonprofit run by two moms in Alaska who make soft yarn wigs for children who have lost their hair due to illness. The yarn is more comfortable for their sensitive scalps than traditional wigs made using synthetics. And the designs make whimsical fantasy hairstyles a reality for children dealing with hair loss.

Lima submitted a wig request through the project’s website and told them about her daughter’s love for Jasmine, from “Aladdin,” and Belle from “Beauty and the Beast.” The two Disney princesses are her favorites because “both went after what their heart said and both fell in love with people that were very different from them,” Lima said.

She didn’t tell Maiya, wanting it to be a surprise.

“When it arrived, I let her open everything and she was so happy it brought tears to her eyes and mine,” Lima said. “I can’t even tell you how big of a smile she had on her face. She knows that she has no hair, but when she puts it on she just loves moving her ‘hair’ around, and for that moment in time she has her ‘hair back.’ It means people care and in a world that stares and comments, knowing their are good people out there that will help makes her feel not so alone. They have made my little girl feel special.”

As an oncology nurse whose own sister has battled cancer twice, Holly Christensen in Palmer, Alaska, knew that comfort could be a great gift for cancer patients. When her friend’s daughter was diagnosed with cancer in 2014, she realized that the little girl would lose her blonde curls. But chemotherapy would make her skin sensitive, making beanies and scarves more practical than a scratchy wig.

Christensen made a wig out of soft yarn and attached it to a crocheted beanie, styled like Disney’s Rapunzel from “Tangled.” She hoped it would “bring a little sun” and magic to nearly 3-year-old Lily’s day. Lily and her mother were overjoyed, and Christensen realized that she could do this for other children at the hospital.

It started locally, with Christensen and her friends making wigs for children in Alaskan hospitals and asking for yarn donations on Facebook. Bree Hitchcock, an acquaintance with mutual friends, saw a post and wanted to help out. Together, they created the nonprofit. They set up a GoFundMe account to collect funds for supplies to make the wigs, which cost about $30 each to make and ship.

GoFundMe featured the Magic Yarn Project on its blog, and the small nonprofit run out of a garage in Alaska went viral in November 2015. It enabled volunteers to join in the effort by setting up chapters in their states and countries, donating funds and yarn, sending in crocheted beanies and even making wigs. And it allowed the group to start fulfilling requests for wigs all over the world.

Initially, members made wigs for characters like “Frozen’s” Elsa and Anna, “The Little Mermaid’s” Ariel and Rapunzel. But the requests have broadened to request just about every Disney princess, as well as superheroes.

Elsa, Rapunzel, Belle and Moana are the favorites for girls, and the group makes pirate-themed and Capt. Jack Sparrow wigs and Batman and Spider-Man beanies are popular with boys — although any child can request any wig they want.

For volunteers who can crochet, Christensen links to free patterns for beanies on the website. Through trial and error, she designed the wigs herself. She wanted them to look nice even after a long time of being used and loved, able to withstand the wear and tear of a child in or out of hospitals.

She also includes videos on the site to show people with little to no craft experience how they can make the wigs. Local chapters run workshops with “wig kits,” which come with crocheted beanies, so anyone can make a wig. Beanies and wigs can take one to four hours to make. By the time a wig reaches a child, up to five people have been involved in the process of creating and shipping it.

To date, volunteers have made 4,734 wigs and sent them to 32 countries, at zero cost to the families requesting them. In 2018, the Magic Yarn Project’s goal is to establish chapters around the world. More volunteers means they can help more children and meet the growing list of wig requests.

“Our wig production tripled in the second year, so if we keep up with this kind of production in year three, we could be at over 10,000 wigs,” Hitchcock said.

They’ve also partnered with A Moment of Magic Foundation, a nonprofit that allows college students to make hospital visits dressed as princesses and other favorite characters. The kids get especially excited when a princess can deliver the wig designed in her likeness, Christensen said.

“The best reactions we get are from the parents, just them telling us how much it means to see their child smile again,” Christensen said. “It’s part of the healing process for families to have the moments of innocence and childhood brought back when it’s been robbed from their child because they’re so sick and used to being in pain. It means so much that the kids are so happy, but an unexpected side effect is seeing how much it means to the family members.”

Cynthia Erickson’s daughter, Violet, is 2½ years old, “spunky, fearless and full of love.” One of her favorite things was getting to meet Ariel and Rapunzel when she went to one of the Disney parks in the spring. A short time later, in June, the healthy little girl was diagnosed with acute lymphoblastic leukemia, a cancer in blood and bone marrow that affects white blood cells, and the most common childhood cancer.

Someone at her clinic showed Erickson a video about the Magic Yarn Project around the time Violet was losing her hair.

The little girl received her Ariel wig in November, and she loved it. She lights up every time she even looks at it, Erickson said.

“For some, like my daughter, they are too young to completely understand what is happening,” Erickson said. “It can be a scary thing to lose your hair, and the Magic Yarn Project makes them feel special. They can forget for just a moment and be transformed into whatever character they want. It was beautiful to see. As parents, you endure a lot of pain on this journey, so you savor those great moments.”

Sophie Colleran’s parents knew that something was wrong with their 5-year-old daughter in January when they took her to the hospital and doctors asked them to go in another room and sit down.

She was also diagnosed with acute lymphoblastic leukemia.

Their energetic little “diva” who loved Disney princesses and changing her outfits up to five times a day became nearly motionless. She didn’t want to eat or get out of bed as she began a three-month stay at Lady Cilento Children’s Hospital in Brisbane, Australia. Her theme song became “Get Back Up Again” from the movie “Trolls.”

When she found the Magic Yarn Project on social media and saw its Rapunzel wig, she knew it would make Sophie smile. She had a Rapunzel dress and had always dreamed of having the princess’ long hair.

“As she pulled out the wig, her face lit up, and she began to giggle,” Colleran said. Sophie ran to put on her Rapunzel dress, put on the wig and told her mother to “take some pictures and send them to everyone.”

Sophie has been battling leukemia for a year, but she is “back to her cheeky little self, running around, playing games, eating lots of ice cream and just doing what every normal 5-year-old kid should be doing.”

“These kids have to grow up very quickly when they’re diagnosed, and for them to receive these wigs, beanies and superhero hats, it just reminds them that there are good people out there and that it’s OK to just be a kid,” Colleran said. “It’s not all hospital beds and needles and chemo.”