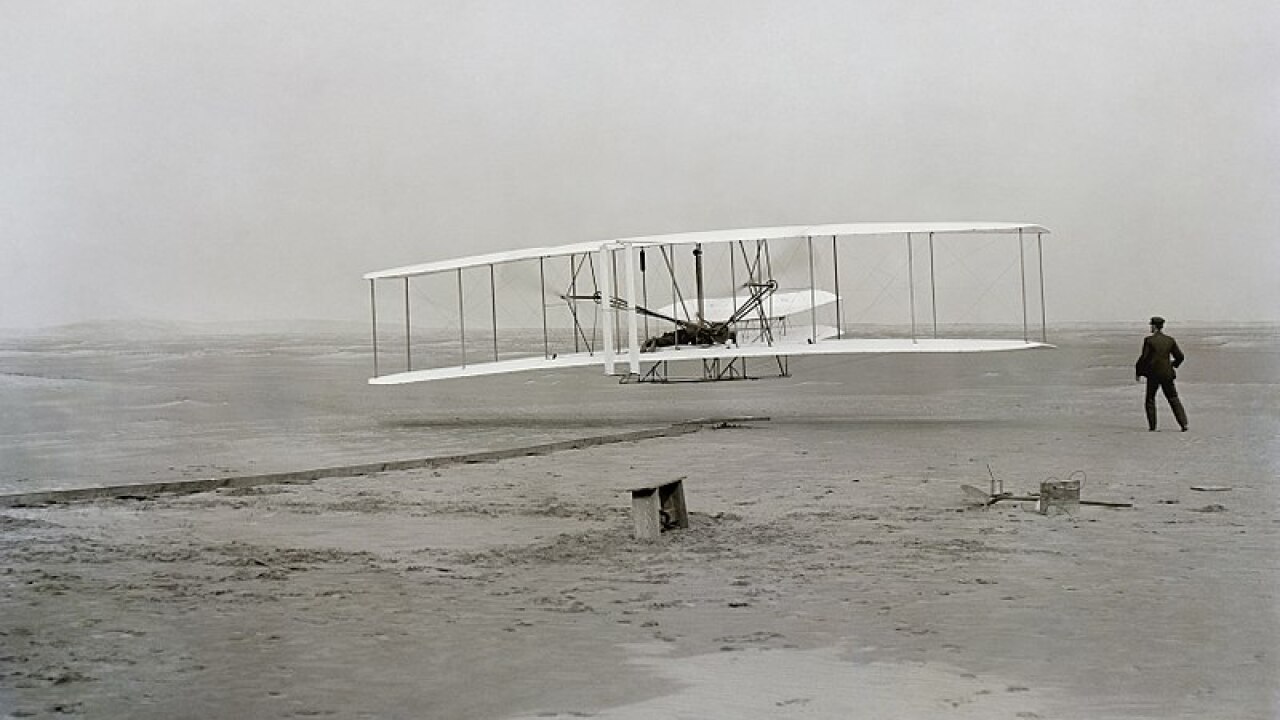 KITTY HAWK, N.C. – On December 17, 1903, Orville Wright piloted a 12 second flight in a handcrafted biplane while his brother Wilbur ran alongside.

The flight covered 120 feet on the windy beach of Kitty Hawk, North Carolina and changed the course of history forever.

On December 17, 1963, Congress approved a resolution to designate December 17 of each year as Wright Brothers Day and requested the President to issue a proclamation annually inviting the people of the United States to observe that day.

The 2017 proclamation reads, in part:

On Wright Brothers Day, we honor the two American pioneers from Dayton, Ohio, who first achieved powered flight, one of the most remarkable triumphs of the 20th century.

Orville and Wilbur Wright shared a fascination with flight and a desire to push the limits of the possible.  They were bicycle mechanics by trade, and though they lacked formal education and resources, they excelled in aviation through determination and tenacity.  They built their own research facilities, learned and tested principles of engineering and aerodynamics, and endured years of failure as they improved on their designs.

Aviation has transformed modern life.  The Golden Age of Flight during the 1920s and 1930s captured the imagination of the American people, and soon opened commercial opportunities for transport and trade.  Two world wars led to the development of the modern U.S. Air Force, strengthening our national security and enabling us to command the battlefield and protect our homeland from the sky.  Aviation has also connected far-away nations, changing the way we conduct business, spend our leisure time, and spread new ideas.  In only 60 years’ time, aviation expanded from the familiar to a new unknown ‑‑ from speeding us through the clouds to launching us into space.

The same spirit that fueled Orville and Wilbur Wright ignited a passion in other aviation visionaries.  In July 1969, American pioneers, Neil Armstrong, Buzz Aldrin, and Michael Collins, completed the first manned mission to the Moon on Apollo 11.  To acknowledge aviation’s humble beginnings, their spacecraft left Earth’s orbit with pieces of wood and a swath of muslin from the left wing of the biplane that made history at Kitty Hawk.  The innovative spirit of the Wright brothers also inspired the legendary Joe Sutter who, in just over 2 years, designed and built the iconic 747 jetliner.  This glamorous jumbo plane, and the first ever wide-body aircraft, transformed travel through the sky.  It has been the aircraft of five United States presidents and was the basis for Sutter receiving the Wright Brothers Memorial Trophy in 1986.

More than a century after conquering flight, the Wright brothers continue to motivate and inspire Americans, who never tire of exploration and innovation.  This great American spirit can be found in the design of every new supersonic jet and next‑generation unmanned aircraft.  Their revolutionary legacy lives on in each airplane take-off and spacecraft launch.  On Wright Brothers Day, we celebrate their extraordinary contribution to the strength and success of our Nation.