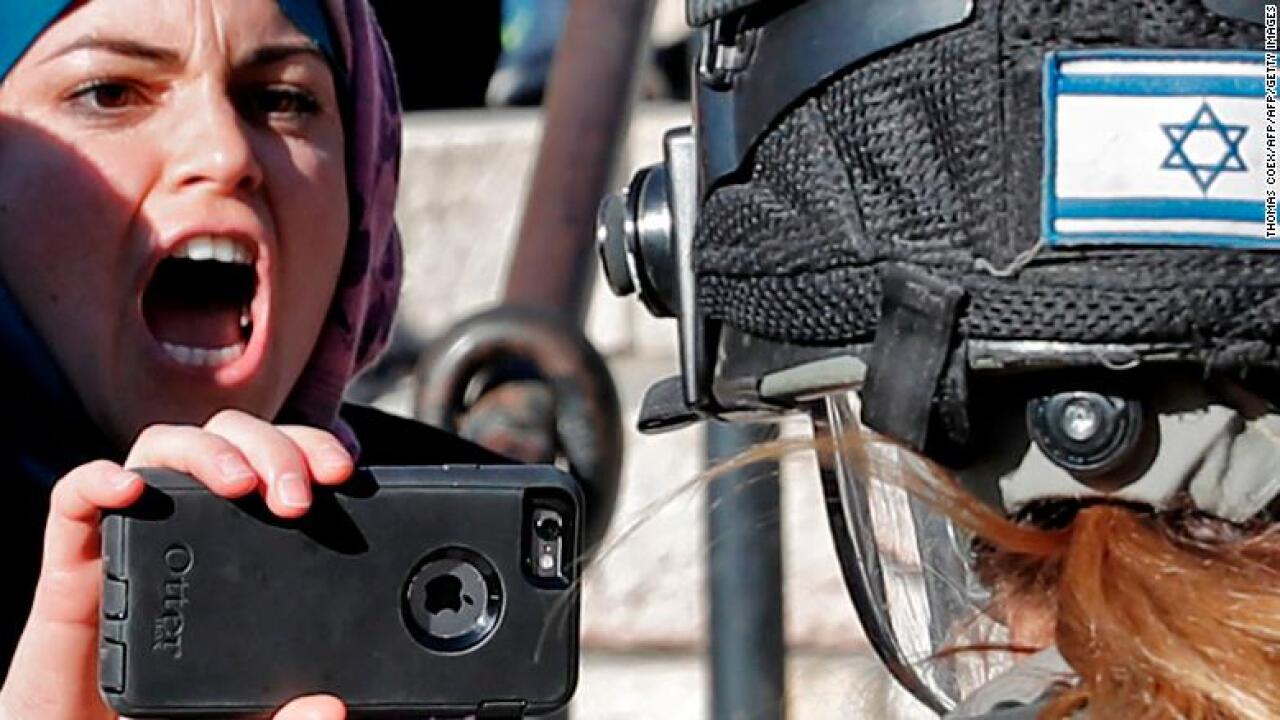 Four Palestinians were killed and hundreds wounded Friday in the West Bank and Gaza during violent clashes between Israeli troops and protesters opposed to US President Donald Trump’s recognition of Jerusalem as the capital of Israel.

Roughly 2,500 Palestinians rolled burning tires and hurled firebombs and rocks at police in several West Bank cities, and another 3,500 clashed with soldiers along the security fence in Gaza, the Israeli army said.

The Palestinian Health Ministry said two people were killed in Gaza, both of them shot in the head. The ministry identified them as Yaser Sukar, 23, killed in Shujaiyya, east of Gaza City; and Ibrahim Abu Tharaya, 29, shot during clashes along Gaza’s border with Israel.

Tharaya was a wheelchair-bound double amputee, the ministry said. He was regularly photographed at protests in Gaza waving a Palestinian flag from his wheelchair.

“Throughout yesterday extremely violent riots erupted along the border of the Gaza strip,” the Israel Defense Forces said in a statement. “IDF troops fired selectively towards main instigators. Claims were received about two dead Palestinians. The claims regarding the circumstances of the death of a Palestinian with no legs who participated in the riots will be reviewed.”

Two more Palestinians died in the West Bank, the Health Ministry said. They were identified as Basel Mustafa Muhammad Ibrahim, 29, from Anata; and Mohammad Ameen Aqel, who was fatally wounded in the Ramallah neighborhood of al-Bireh.

Israeli police say Aqel was shot after carrying out a stabbing attack on a border police officer during a demonstration.

Photos taken of Aqel show him wearing what appeared to be an explosive belt. Police have not said whether they believe the belt was real or a fake.

At least 367 others were injured — seven critically — and taken to hospitals in the West Bank and Gaza, according to the health ministry. Most of them were suffering from injuries caused by tear gas and rubber bullets.

The situation around Gaza remained tense heading into the weekend, as Israel warned Gaza’s Hamas leadership on Thursday that it would not tolerate continued rocket fire from the coastal enclave.

Since Trump’s announcement over a week ago, 16 rockets have been fired from Gaza into Israel, Brig. Gen. Ronen Manelis told Israel’s Army Radio on Thursday.

Manelis acknowledged that most of the rockets had not been fired by Hamas, but were in fact launched by smaller Islamist organizations. Israel has repeatedly said it holds Hamas responsible for any projectiles fired from Gaza.

Tens of thousands of worshipers came to the al-Aqsa mosque in Jerusalem’s Old City for Friday prayers. After prayers were over, hundreds stayed behind to protest.

Some waved the flags of countries most critical of Trump’s announcement, including those of Turkey and Malaysia.

Thousands of Jordanians also gathered to protest in downtown Amman, and local television aired live footage of smaller protests elsewhere in the country.

Trump’s move last week to recognize Jerusalem as the capital of Israel and commit to moving the US Embassy to the holy city prompted international criticism and sparked protests across the world.

The announcement, which upended seven decades of US foreign policy, delighted Israeli officials but was condemned by Palestinian leaders, who see East Jerusalem as the capital of a future Palestinian state.

Palestinian Foreign Minister Riad Malki told reporters last week that the leadership had decided there would be “no formal communications” with US officials in the wake of Trump’s Jerusalem decision.

Jordan’s King Abdullah has also been critical of Trump’s announcement, saying last week that there was “no alternative to a two-state solution, and Jerusalem is key to any peace agreement.” Abdullah is the custodian of the Muslim holy sites in the Old City of Jerusalem.