Moore: Alabama won’t let people from out of state control this election 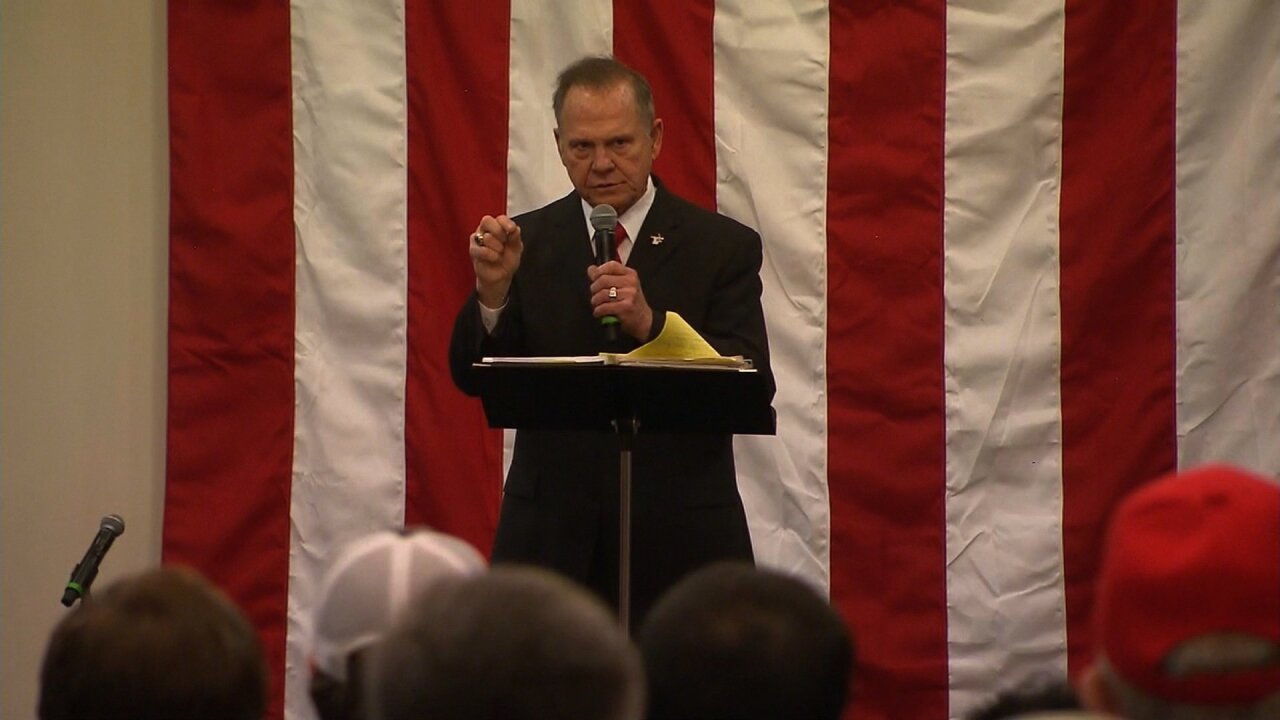 Republican Roy Moore cast the sexual allegations he faces as an outside effort to tank his Senate candidacy Monday night at his final rally before Tuesday’s special election.

Republican Roy Moore said Alabama voters in Tuesday’s US Senate special election should not “ignore what they believe” about the sexual allegations he faces.

“I’m going to tell you, if you don’t believe in my character, don’t vote for me,” he said Monday night at his election eve rally here in Alabama’s Wiregrass region, a Moore stronghold in the state’s rural southeastern corner.

“I love him, I trust him and you should, too,” Kayla Moore said.

The nearly two-and-a-half hour rally was largely an outburst of anger directed at the national media and Democrats who have seized on the accusations facing Moore in an effort to help Democrat Doug Jones win the special election to replace Attorney General Jeff Sessions.

Moore faces allegations that he pursued sexual relationships with teenage girls while in his 30s — including molesting a 14-year-old and assaulting a 16-year-old.

Moore denounced the “terrible, disgusting” reporting of The Washington Post, which first reported a woman’s accusation that he had pursued a sexual relationship with her when she was 14 and he was 32.

Kayla Moore argued that her husband is no “bigot,” defending his treatment of African-Americans, women and Jewish people, noting that “one of our attorneys is a Jew.”

Rep. Louie Gohmert, a Texas Republican, suggested — without any evidence — that the women levying the allegations against Moore are being paid to do so.

“Anytime you see money and power involved, you’ve got to look for who’s benefiting,” he said. “Did somebody receive money? … It takes time to dig those things out.”

Bannon and other out-of-state speakers whipped up the crowd’s anger at Republicans who have abandoned Moore in the wake of the sexual allegations.

The loudest “boo” of the night was directed at Alabama’s Sen. Richard Shelby, who criticized Moore on CNN on Sunday.

Bannon and others touted President Donald Trump’s support for Moore, casting the election as a referendum on the President’s agenda.

“It’s an up-or-down vote tomorrow between the Trump miracle and the nullification project,” Bannon said.

Alabama voters, Moore said, are “not going to stand by and let other people from out of state and money from California control this election.”

He said the United States must “recognize God” and argued that Democratic and Republican leaders in Washington have failed to do so.

“In this country, we have explored the temple built by the Democrat and the Republican party, and found that they have idols that do not hear us and do not see us,” he said.

The event featured at times bizarre rhetoric from speakers who said Alabama voters won’t have their decisions made for them by out-of-state forces — even while those speakers were from out of state themselves.

“Nobody can come down here and tell the folks of Alabama what to do,” said Bannon, who noted he is from Virginia.

Moore has been a sparse presence on the campaign trail since the sexual allegations emerged, and he disappeared — with aides refusing to answer questions about where he was — over the final weekend. He told the crowd he’d taken his wife to West Point for “two and a half days” to rest from an “odd” campaign.