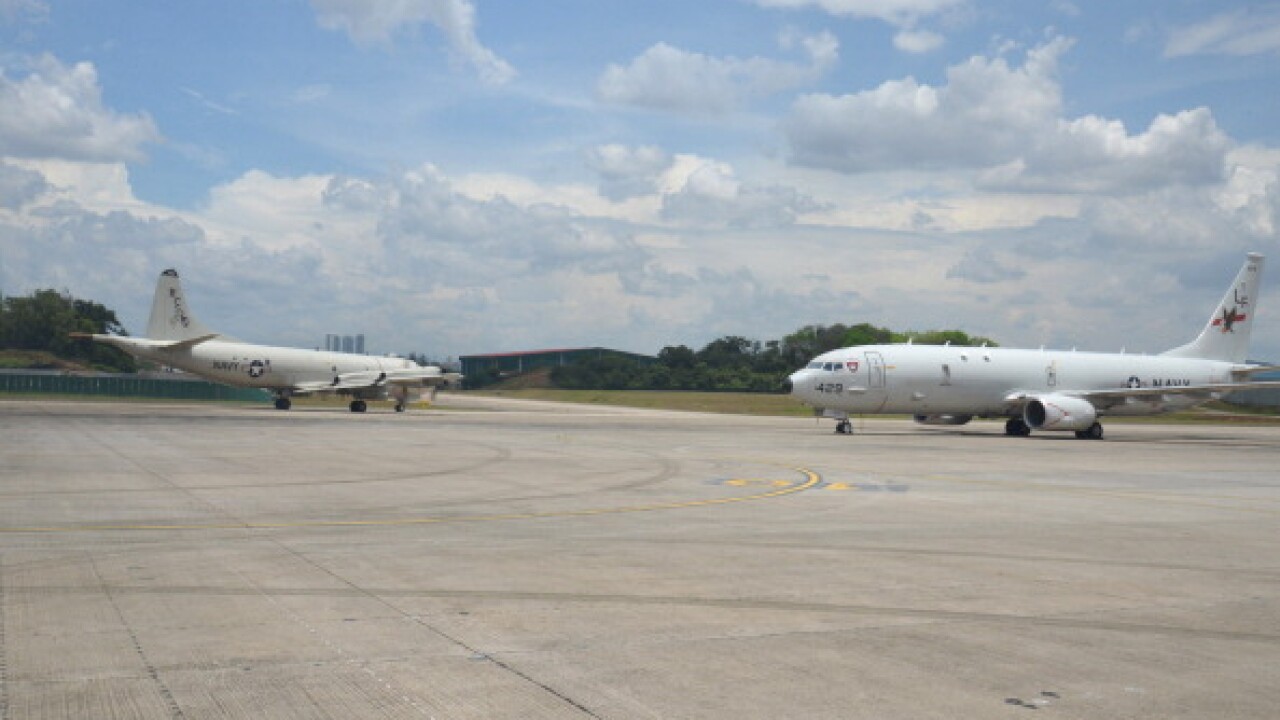 KUALA LUMPUR, MALAYSIA – MARCH 17: In this handout provided by the U.S. Navy, A P-3C Orion, left, assigned to Patrol Squadron (VP) 46 taxis by a P-8A Poseidon assigned to Patrol Squadron 16 before its mission to assist in search and rescue operations for Malaysia Airlines flight MH370 on March 17, 2014 in Kuala Lumpur, Malaysia. VP-16 and VP-46 are deployed in the U.S. 7th Fleet area of responsibility supporting security and stability in the Indo-Asia-Pacific region. The missing aircraft disappeared one week ago carrying 227 passengers and 12 crew, baffling the international rescue and search teams who have found no remains or clues in the waters surrounding South East Asia. All passengers and crew are currently under investigation for possible sabotage although no evidence of such activity has been found. (Photo by Mass Communication Specialist 2nd Class Eric A. Pastor/U.S. Navy via Getty Images)

A Russian Su-30 fighter jet made an “unsafe” intercept of a US P-8A Poseidon aircraft Saturday while it was flying over the Black Sea, the Pentagon told CNN Monday.

“The US aircraft was operating in international airspace and did nothing to provoke this Russian behavior,” Lt. Col. Michelle Baldanza, a spokeswoman for the Pentagon, told CNN.

The Russian jet’s actions were deemed unsafe because the aircraft crossed in front of the US plane from right to left while engaging its afterburners, forcing the P-8 to enter its jet wash, an action that caused the US plane to experience “a 15-degree roll and violent turbulence,” according to Baldanza.

Baldanza added that the Russian fighter jet came as close as 50 feet from the US aircraft.

She said the P-8 had its transponder on during the incident.

A US Navy official told CNN that the intercept lasted about 24 minutes.

“Unsafe actions‎ have the potential to cause serious harm and injury to all air crews involved,” Baldanza said.

It has been several months since the last reported unsafe interaction between US and Russian aircraft. The most recent reported incident occurred in June, when a Russian Su-27 fighter flew within five feet of a US Air Force RC-135 reconnaissance aircraft over the Baltic Sea.

Prior to that incident there had been several similar encounters in the Black Sea, an area where Russia, the US and NATO operate in close proximity, particularly since Russia boosted its military presence in the region following its annexation of Crimea in 2014.