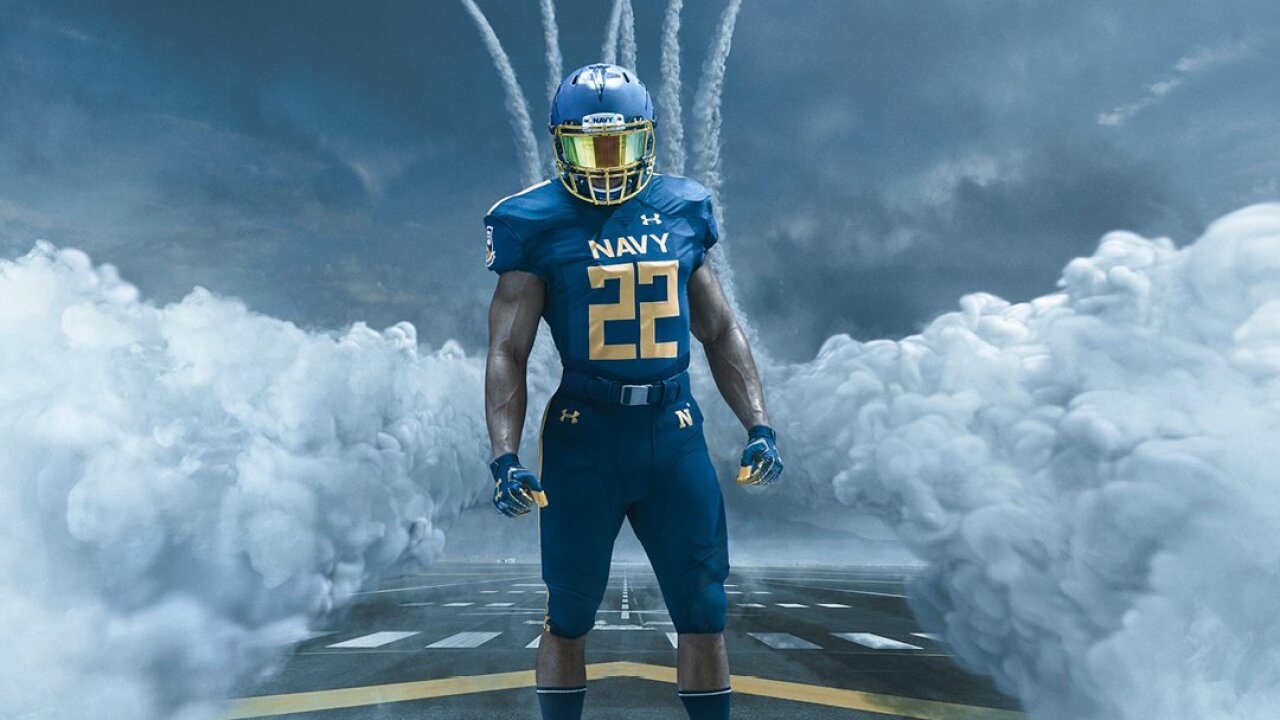 ANNAPOLIS, Md. (NavySports.com) – The Navy football team will wear Under Armour Blue Angels uniforms for the 2017 Army-Navy Game presented by USAA on Dec. 9 at Lincoln Financial Field in Philadelphia. The game can be seen live on News 3 at 3:00pm.

“This tribute to the Blue Angels reflects the enthusiastic pride and appreciation we have for the Navy’s premier flying team and the motivation they convey to Navy football and the fleet at large,” said Naval Academy Director of Athletics Chet Gladchuk. “The masterminds at Under Armour are always thinking of ways to inspire our troops while still reflecting a deep appreciation for a Naval history that is so ingrained in our game day traditions. Annually, a special Navy uniform has become a statement in this game and brings with it appreciated meaning and a clear message that we are all in.”

Are you ready for #ArmyNavy? @NavyFB will be wearing Blue Angels-inspired uniforms for the 118th Army-Navy Game! pic.twitter.com/qndiFz1tcQ

“Our partnership with the United States Naval Academy has afforded us the opportunity to tell some incredible stories through our specialty uniform designs and we hope, in some way, that the special moments we create on behalf of the Academy manifest the gratitude we feel. From the “Summer White” design to the “Don’t Tread on Me” uniforms, each opportunity leads down a path of research and information that drives us towards another special moment or achievement to celebrate,” said Adam Clement, Under Armour’s Senior Creative Director of Team Sports. “This year we partnered with the Naval Academy to use the Army-Navy Game to honor the incredible pilots that make up the Blue Angels. Anyone who has had the privilege of watching the Blue Angels perform knows there is no show quite like it. It inspires and excites all who stand witness and we couldn’t think of a better way to pay homage to their great feats than creating a uniform that pays tribute to them.”

The annual Army-Navy Game is steeped in tradition and has been a source of competition and camaraderie since 1890. To commemorate this year’s matchup, and one of the most enduring rivalries in college football, Under Armour created specialty Navy football uniforms inspired by the Blue Angels.

Featuring hand-painted helmets depicting a Delta Formation, and a chrome facemask to mimic the visor of the Blue Angel pilots, the Under Armour design team incorporated design elements that pay tribute to the skill, precision, and rich history of the Blue Angels squadron.

Additional design details include:
• U.S. flag on left sleeve matches the flight suits that the squadron wear in the cockpit.
• The number font is inspired by the numbers on the tail of the F/A-18 Hornet aircraft.
• Blue Angel insignia on the right sleeve; this is the same design on the F/A-18 Hornet aircraft.
• The color of the uniforms are an exact match to the Blue Angels flight suit.
• Stripe dimensions on the pants are an exact match to the flight suit.