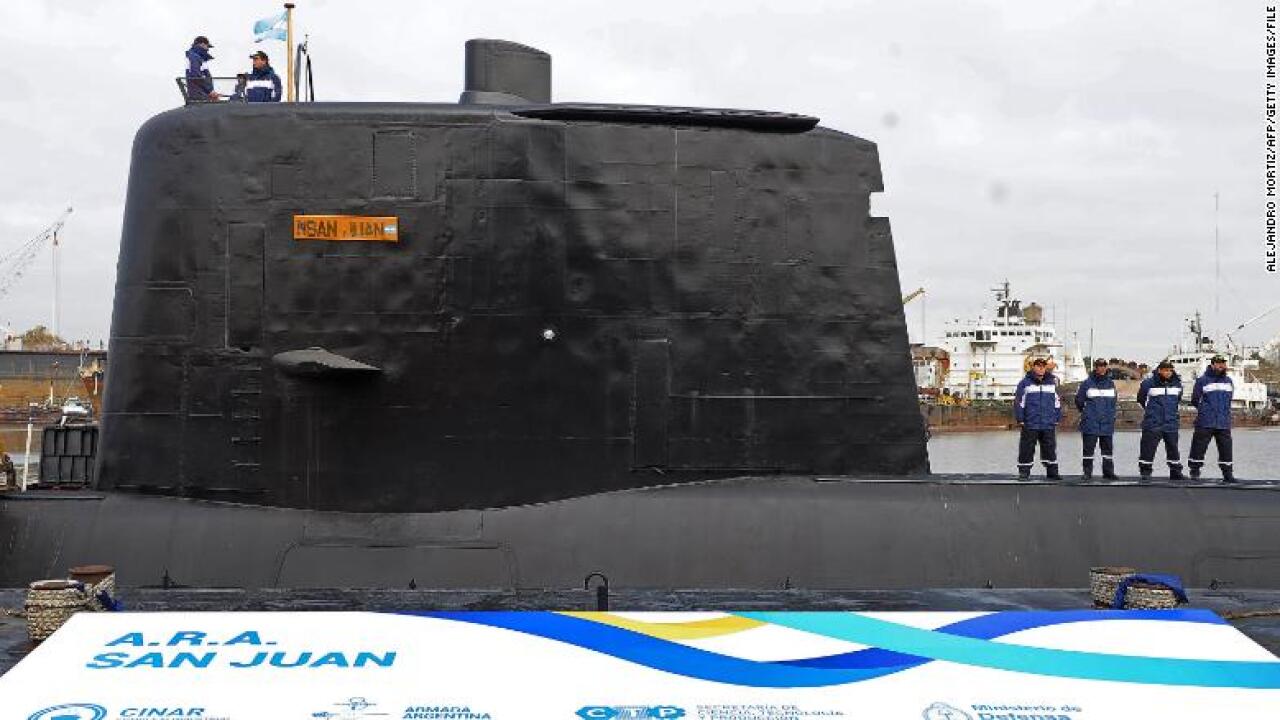 A noise detected near the last known location of a missing Argentine submarine on the day it vanished was consistent with an explosion, the Argentine Navy said Thursday.

A dozen nations have been searching by air and sea for the ARA San Juan, which has 44 crew aboard and was last contacted off the coast of Argentina on November 15.

The latest update comes as the clock runs down on the chances of finding the vessel before its air supply runs out.

The San Juan has enough air to last only seven to 10 days if it has remained fully immersed since that time, experts say. If the submarine has surfaced or “snorkeled” — that is, raised a tube to the surface to refresh the vessel’s air — since then, the crew may have bought more time.

Anxious families have been waiting at Argentina’s Mar del Plata navy base, to which the submarine was heading when it vanished, for news of their loved ones. Meanwhile, ships and aircraft are scouring a swath of the South Atlantic for the missing vessel.

Balbi said Wednesday that the Navy had just begun analyzing a new noise that was detected on the day the sub vanished.

The Comprehensive Nuclear-Test-Ban Treaty Organization, based in Vienna, Austria, said Thursday that its monitoring systems had detected the noise referred to by the Argentine Navy.

The sound of “an underwater impulsive event” was detected at 1:51 p.m. GMT (10:51 a.m. local time) by its underwater microphones, it said. The organization has 11 hydroacoustic stations positioned around the world listening for signs of nuclear explosions.

“Details and data are being made available to the Argentinian Authorities to support the search operations that are underway,” the organization said.

Balbi said Wednesday there had been “no type of contact, not passive nor active,” with the submarine since November 15. The search is “in the critical phase,” he said.

A spokesman for the UK Ministry of Defense confirmed on Thursday that a Royal Air Force C-130 aircraft had landed in Argentina and is now a part of the search, as is a Voyager, a refueling aircraft that helps searches go on longer.

It appears to be the first time since the Falklands conflict in 1982 that an RAF plane has landed in Argentina, although the UK Ministry of Defense would only characterize it as the first time in a “very long time.” The Royal Navy’s ice-patrol ship, HMS Protector, had already joined the search.

Russia has also sent navy specialists and equipment to Argentina, state news agency Tass cited the Russian Defense Ministry as saying Thursday. The deployment includes a ship equipped with two deep-water vehicles capable of searching depths of up to 6,000 meters.

The US Navy has sent underwater search vehicles and two undersea rescue systems that could be used to rescue crew members.

Late Tuesday, the British polar ship saw flares — one orange and two white — east of where it was conducting operations, prompting the dispatch of a search-and-rescue team consisting of three ships and two aircraft, Balbi said.

For many hours, they patrolled the area “and were not able to detect any magnetic anomaly,” Balbi told CNN. The spokesman said previously that the flares aboard the San Juan are green and red.

The Argentine navy lost contact with the ARA San Juan shortly after the vessel’s captain reported a failure in the battery system while the sub was submerged off Argentina’s South Atlantic coast, the military said.

The submarine was traveling from a base in Argentina’s far southern Tierra del Fuego archipelago to its home base in Mar del Plata on the northern side of the country.

Outside the Mar del Plata navy base before the news conference, Federico Ibáñez was among the many family members and well-wishers hoping for good news. His brother, Cristian, is a radar technician on the San Juan.

Federico Ibáñez questions why the Argentine navy continues to say the boat could be on the ocean surface, and why rescuers took so long to begin searching the ocean floor.

“The other relatives really have more hope and think everything will be OK, while I think the navy is wrong in saying the submarine could be on the surface,” said the 34-year-old.

“It’s a lack of respect. If it was on the surface, they would have found it. They didn’t, and they didn’t look for them at the bottom,” he said. “If they did it earlier, it could have been different.”

Cristian Ibáñez has a daughter, Elisa, 9. His wife, Fernanda Valacco, has told the girl little, hoping that her husband will return and she won’t have to explain what happened.

“She knows her father is missing, but she knows he’s fine and will be home soon,” Valacco told CNN. “I am sure all of the 44 will be fine and could come here any moment.”

Federico Ibáñez described a tense atmosphere on the navy base as family members huddled together praying for word of the sub’s discovery.

In 2004, she joined the navy after seeing an ad about military ships. She has voiced hopes of one day commanding a sub herself.

“At the time, there weren’t any female officers in the force. I took it as a challenge,” she once told the Argentine Defense Ministry in a video interview. “You can do the same things than any men do, even if you are in a traditionally male-dominated environment. … Any women can do it.”