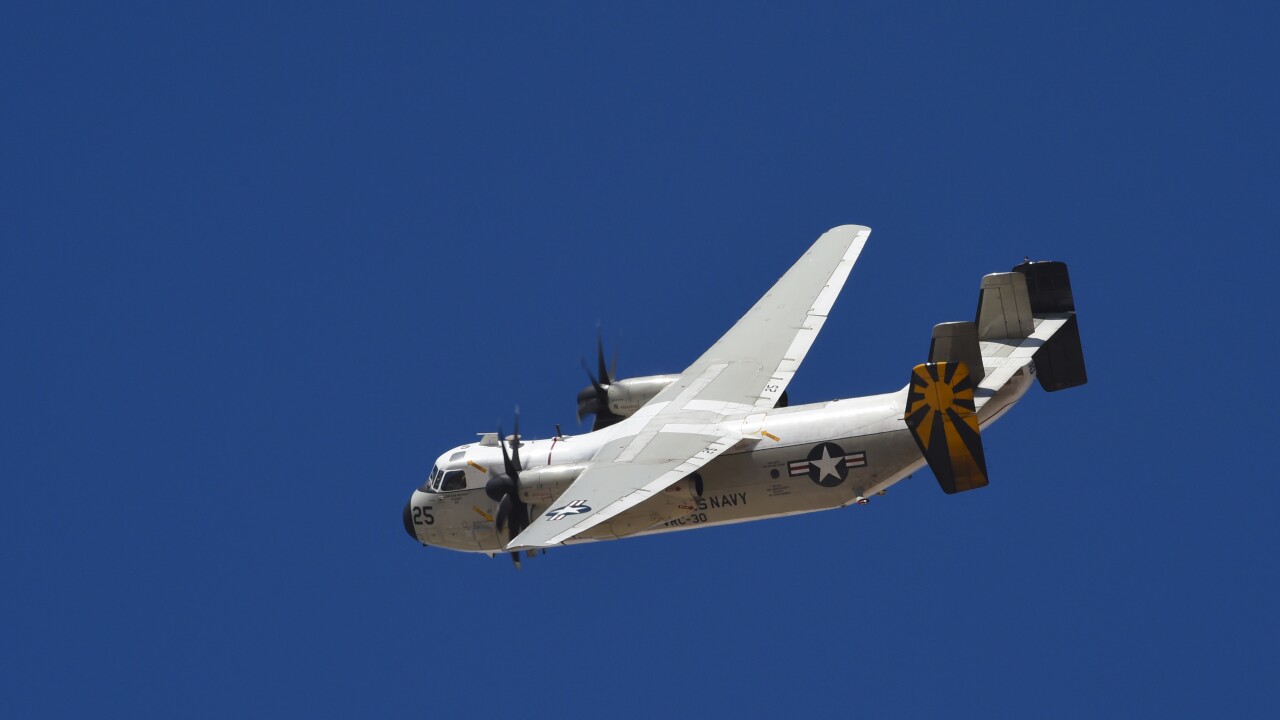 OKINAWA, Japan — A US Navy aircraft carrying 11 crew and passengers crashed into the Pacific Ocean, southeast of Okinawa on Wednesday.

Eight personnel were recovered by the ‘Golden Falcons’ of Helicopter Sea Combat Squadron 12. They were reported to be in good condition and have been transferred to the USS Ronald Reagan for further medical evaluation.

The names of the crew and passengers are being withheld pending next of kin notification.

“I have been informed from the US military that engine trouble may have caused [the crash],” says Japan’s Defense Minister Itsunori Onodera.

A release from the U.S. Navy reads:

“At approximately 2:45 p.m. Japan Standard Time, Nov. 22, 2017, the C2-A aircraft with 11 crew and passengers onboard crashed into the ocean approximately 500 nautical miles southeast of Okinawa. The aircraft was conducting a routine transport flight carrying passengers and cargo from Marine Corps Air Station Iwakuni to USS Ronald Reagan (CVN 76).  Reagan is operating in the Philippine Sea as part of an exercise with JMSDF.

The cause of the crash is not known at this time and will be investigated, according to the statement from the US Navy 7th Fleet.

Troubled year for Navy in Pacific

It’s been a difficult year for the Navy in the western North Pacific following a spate of incidents — most involving ships assigned to the East Asia-based US 7th fleet — that included the deaths of 17 sailors.

In August, Vice Adm. Joseph Aucoin was relieved of his duty as the commander of 7th Fleet following a deadly collision between the destroyer USS John S. McCain and a merchant ship off Singapore that left 10 US sailors dead.

In June, the guided-missile destroyer USS Fitzgerald, also of the 7th Fleet, collided with a cargo ship off Japan, killing seven US sailors.

Those two fatal collisions were “avoidable” and “numerous failures occurred on the part of leadership,” a Navy report concluded earlier this month.

At least two other incidents involving US 7th Fleet ships happened in waters off East Asia this year.

On Saturday, a Japanese tugboat lost propulsion and drifted into the USS Benfold in a bay off central Japan, causing minor damage to the guided-missile destroyer, the Navy said.

In late January, the guided-missile cruiser USS Antietam ran aground in Tokyo Bay, damaging its propellers.

Another incident in East Asian waters involved a US 3rd Fleet ship: In May, the guided-missile cruiser USS Lake Champlain was struck by a South Korean fishing boat off the Korean Peninsula.

The Navy has launched multiple investigations and reviews in the wake of this year’s accidents.

The C2-A that crashed Wednesday belongs to a Japan-based squadron that generally flies cargo and passengers between shore bases and the USS Ronald Reagan.