List of what changes in Phase Two for Virginia
NewsPolitics

Life after ‘Hope’: Obama poster creator Shepard Fairey reflects on art and politics in the age of Trump 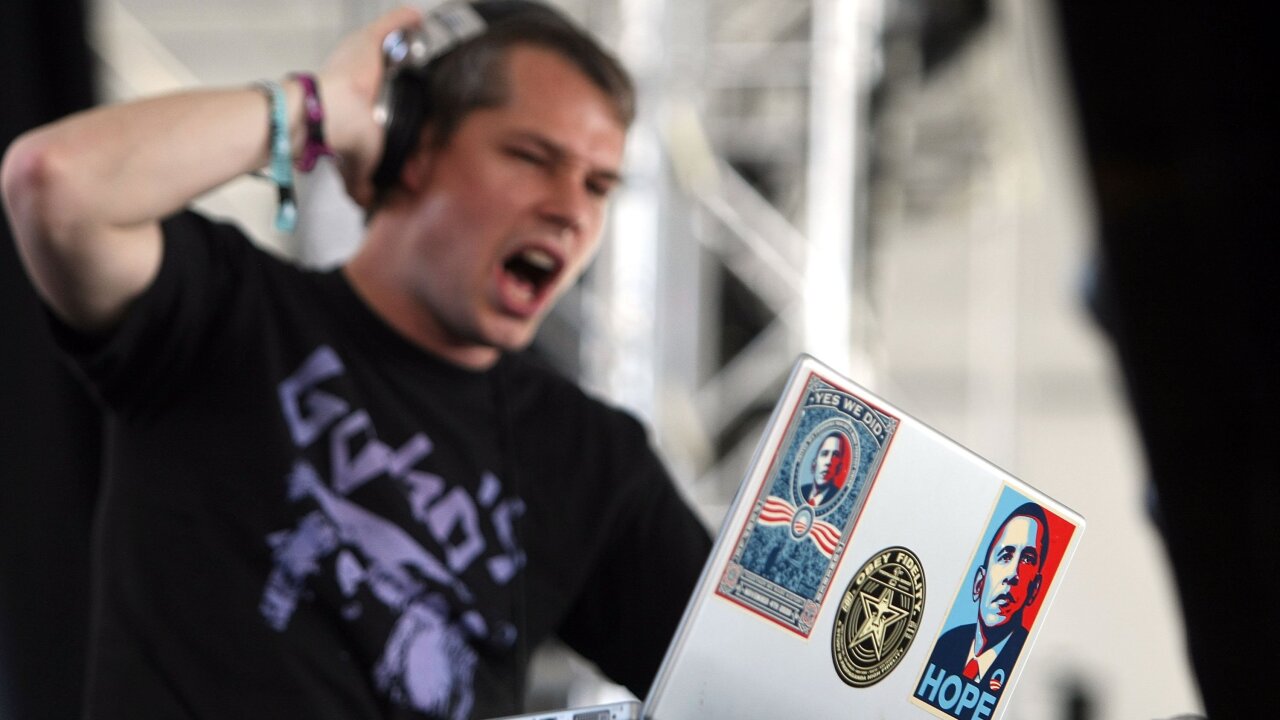 **This image is for use with this specific article only** President Obama invited Shepard Fairey, the street artist who made the ubiquitous portrait of him titled “Hope,” to bring his family and visit him at the White House the day after the 2016 election.

President Obama invited Shepard Fairey, the street artist who made the ubiquitous portrait of him titled “Hope,” to bring his family and visit him at the White House the day after the 2016 election.

Fairey assumed Hillary Clinton would win and his White House visit would be a celebration of her election, until it became clear that was not to be. He emailed the Obama aide coordinating the visit. I guess we’re not going to be coming to the White House tomorrow, he wrote. The aide responded that the President still thought it’d be nice for them to visit.

So Fairey, hopeless and on the verge of what he described as a mental breakdown, went to the Oval Office with his wife Amanda and their daughters Vivienne and Madeline on November 9, 2016.

It’s the one-year anniversary of that Oval Office visit when Fairey and I talk. He’s preparing for a weekend that will include “Damaged,” his first show in Los Angeles in almost a decade, and the debut of a Hulu documentary about him, “Obey Giant: The Art & Dissent of Shepard Fairey,” that covers his career from local street artist to someone whose work will be in future history books.

“All I said going into it was if there’s a critical voice, I would like an opportunity to make a counter-argument, that’s really the only request I had for the entire process,” Fairey says. And he made some music suggestions.

Criticism and counter-arguments are key elements of his art, which is inspired by band flyers and graffiti and has come to be known for its Russian constructivist influences. In that regard, the Trump presidency is perfect for Fairey.

His latest big hit is the “We The People” series, released days before Trump’s inauguration and the Women’s March, which included an image of a woman in an American flag hijab and the words, “We The People Are Greater Than Fear.”

But it started with ironic stickers of Andre the Giant. Fairey’s first “political” piece was Andre’s face plastered over a campaign billboard for Buddy Cianci, a disgraced former mayor looking for political redemption and another term in Providence, Rhode Island, in 1990. It became a viral sensation in the city, and Fairey turned it in as part of an assignment at the Rhode Island School of Design.

Fairey made various iterations of the Andre the Giant face in the ’90s and put up stickers, posters and spray-painted, stenciled images of the logos around cities he visited. He estimated the number of stickers he’s made is in the millions. In 1994, he saw one of his stickers on the MTV show “120 Minutes” — plastered on a music equipment crate during a segment with the Beastie Boys.

“I’d say in the grand scheme of people proliferating their imagery, I’m probably in the top percentile there,” he says. “For me, it’s about more than just street art. It’s about using every platform at my disposal to get my work out there. But even if you were just evaluating me in the street art world, I think I’ve done more than about 98% of the people.”

His most well-known work came in 2008 with “Hope.” The portrait showed the young, charismatic politician looking thoughtfully upward and into the distance. The color palette reimagined the traditional political aesthetic of red, white and blue as a single bold red, cream in place of white, and two shades of blue, converging in the middle. Below, in an all-caps san-serif font, the word “Hope.” The Obama campaign’s official “O” logo sits above the “e,” almost like an accent.

The portrait was made independently of the campaign, but with its blessing after Fairey reached out through a friend to ask if they’d mind. The original version said “Progress,” and the campaign suggested “Hope” instead. The piece became an indie-pop, street-art blockbuster smash, with an initial run of 700, and eventually more than 300,000 distributed.

Fairey remixed and rereleased “Hope” a total of nine times, including “Change,” “Vote,” “Yes We Did,” the Time Magazine Person of the Year cover in 2008, the official inauguration poster in 2009, “Occupy Hope” for the Occupy movement in 2011 and “Honest Gil” for Represent.us in 2014.

Bootleg parodies proliferated. Some played off political themes, changing “hope” to “nope” or swapping Obama’s face for McCain’s. There are now versions showing Hillary and Bernie, and versions with Putin and Kim Jong Un. The fifth season of “Veep” did one for Julia Louis-Dreyfus that said “Maybe!” There are versions with Trump and Bill Clinton that both say “Grope,” of Obama in a tan suit that says “Taupe,” and of Pope Benedict XVI that says “Pope.” There are Star Wars characters and Snoop Dogg and the cartoon boy on the cover of Mad magazine. There are websites where you can make your own. One of Fairey’s favorites is of Trump, his hair blowing up, with the words, “There will be hell toupee,” that he saw at the Women’s March.

“Hope” was a Snapchat filter before Snapchat. Its style capable of being duplicated across different faces in politics and pop culture. It was art. It was a meme. It was acquired by the Smithsonian’s National Portrait Gallery in 2009.

“Hope” was also a headache for Fairey because of a legal battle over the photograph the portrait was based on. The image, shot by an AP photographer, was of Obama when he was with George Clooney at the National Press Club in 2006. Obama’s Justice Department recommended jail time in connection with evidence in the case that Fairey had manipulated. An out-of-court settlement was reached in 2011.

“Some of it is not the most pleasant thing to relive, but I think it’s worth it for people to understand,” Fairey says. In the documentary, he called the experience “humiliating” and “something that’s going to haunt me forever.”

During Obama’s second term, Fairey voiced some disappointments with the man whose portrait had brought him both international exposure and a soul-crushing lawsuit. In 2013, after leaked documents revealed mass government surveillance by the NSA, Fairey supported a “Hope” parody that said “Yes We Scan” and told the Los Angeles Times he felt “sickened and betrayed” by Obama. And in 2015, he told Esquire that Obama hadn’t lived up to his expectations. “Not even close.”

He says the candidate he’s most likely to support the same way he supported Obama is Elizabeth Warren, but he won’t necessarily do another portrait.

“I am not as interested in making portraits of people that maybe play into the idea of image and celebrity as the important thing when I actually think substance is,” he says.

Fairey originally backed Bernie Sanders in 2016, designing his top-selling campaign shirt, but later supported Clinton. He avoided Trump in his art until three weeks before the election when he released “Demagogue,” made for the band Franz Ferdinand’s song of the same name. It’s the first and last portrait he made of a man he describes as a “negative-energy amoeba” who grows stronger the more you hate him. His Trump piece shows just a nose, mouth, and tie, with red search lights shining up to frame the face. “It looks like Big Brother on a digital screen,” Fairey says. “All you have to do is see that tie and the mouth contortion and you know it’s him.”

“I felt for him as a human being,” he says. “I would be face to face with Obama, whose legacy would be under fire and Trump would be attempting to dismantle it.”

He wrote on his website that day that he was “disheartened” and that “the voters have rewarded possibly the most uncivil and disgusting behavior from any candidate I can recall.”

But once in the Oval Office, Obama put Fairey at ease. Obama talked to his daughter Vivienne about a t-shirt and pin line she does called Tiger Lights that donates part of the proceeds to women’s charities. He was “dignified, composed, encouraging, everything that you would want someone to be under pressure,” Fairey says.

While progressives across the country panicked, Obama remained optimistic. He told Fairey and his family that progress isn’t a straight line, that there are zigs and zags and setbacks, that he had faith in young people, and that the future would be OK.

In other words, hope.

“It’s a simple message,” Fairey says. “But I agree with it.”