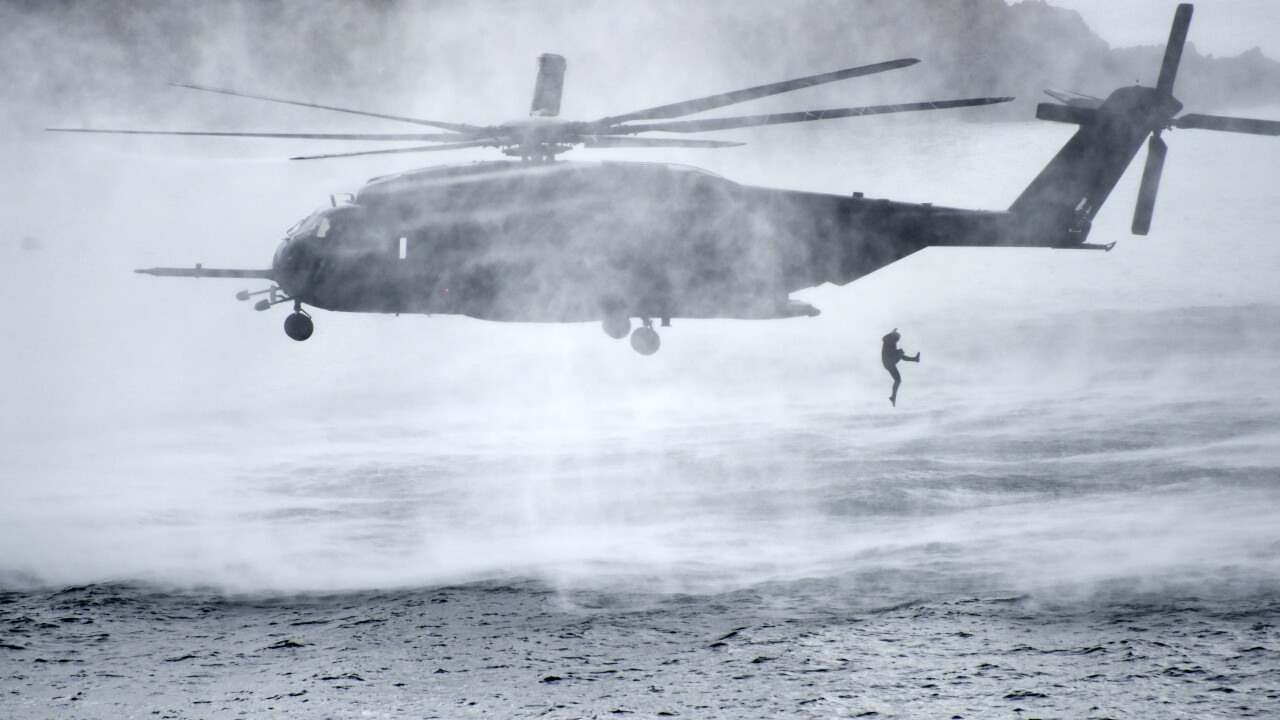 171019-N-TB148-468 BUSAN, Republic of Korea (Oct. 19, 2017) Explosive Ordinance (EOD) divers from both U.S. and Republic of Korea (ROK) navies exit an MH-53E Sea Dragon assigned to the Vanguards of Helicopter Mine Countermeasures Squadron (HM) 14, Detachment 2A during the annual Multinational Mine Warfare Exercise (MN MIWEX). MN MIWEX is a mine countermeasures exercise between the U.S., Republic of Korea, and U.N. Command Sending States meant to increase combined capabilities and readiness to respond to any contingency on the Korean peninsula. (U.S. Navy photo by Mass Communication Specialist Seaman William Carlisle)

The US, Australian and South Korean navies are conducting joint exercises off South Korea intended to simulate the interception of shipments of nuclear material meant for North Korea.

The drills, held Monday and Tuesday off South Korea’s Jeju Island, come as US President Donald Trump visits the region for talks which are expected to be dominated by discussion of North Korea.

Pyongyang is regularly angered by co-ordinated drills in the region, which it sees as practice for an invasion, but which the US and its allies say is necessary to counter North Korean aggression. These ones are likely to be no different.

“This drill is to stop the shipment of North Korea’s nuclear and WMD (weapons of mass destruction) materials in and out through combined navy drill between allies, and to carry out the UNSC (United Nations Security Council) resolution against North Korea’s illegal actions of provocation,” South Korean navy Rear Adm. Choi Sung-mok, chief of staff for the South Korean fleet said.

He added that “through this training, the Navy will continue to strengthen the capability to carry out the joint drill as a preparation against various threats that can happen in the sea.”

Four surface vessels from the three countries — South Korea’s King Sejong Aegis destroyer, the US Navy’s USS Chafee Aegis destroyer as well as the Australian Navy’s escort ships Melbourne and Parramatta — are taking part in the drills, with South Korean and US P-3 aircraft providing support and training on searching and tracking vessels carrying WMD.

North Korean government officials told CNN’s Will Ripley that Pyongyang is “watching Trump’s Asia visit closely,” and was monitoring the three carrier strike groups that are now on the waters off the Korean Peninsula as well as the recent bomber flyovers on the peninsula. “They are not only threatening in words, but they are switching over into action to ignite another Korean War,” they said, referring to US rhetoric.

The officials added: “Nobody knows when and how the ‘war maniac’ Trump will ignite the ‘wick of war’.” They said Trump is thinking of these strategic assets as a gift to his allies in the region, but North Korea finds that to be absurd.

The officials told CNN that if Trump does anything “crazy,” North Korea will stop him by “responding powerfully.”

“This is a touch and go situation and we are on the brink of a major explosion.”

‘All options on table’

During a joint press conference with Trump on Monday, Japanese Prime Minister Shinzo Abe said Japan and the US are in “complete agreement” as to the way forward in dealing with North Korea.

Abe said he agreed that now is not the time for direct talks with North Korea, but rather for a strengthening of sanctions against Pyongyang.

“For more than 20 some years, the international community attempted dialogue with North Korea,” Abe said. “Now is the time not for dialogue but for applying a maximum level of pressure on North Korea.”

Trump declared that the “era of strategic patience is over” when it comes to the United States’ stance toward North Korea.

“Some people said that my rhetoric is very strong,” he said during remarks at a press conference in Tokyo. “But look at what’s happened with very weak rhetoric over the last 25 years. Look where we are now.”

South Korea has been a long-term ally of the United States, since the two states fought together during the Korean War in the 1950s.

With its large US military presence, Seoul has long participated in joint military exercises with its ally since the Korean War ended in an armistice and ceasefire in 1953.

In August the two nations undertook the Ulchi Freedom Guardian exercises, one of two annual cooperative drills that the two countries conduct.

To critics, they’re a needless provocation, but to advocates, an essential way to get troops combat ready.

While the joint military drills between the US and South Korea that both sides say are defensive in nature they enrage South Korea’s neighbor to the north — Pyongyang views them as practice for an eventual invasion.

The exercises, according to US Forces Korea, are designed to “highlight the longstanding military partnership” between the two countries and improve stability and security on the Korean Peninsula.

The US Navy and marines also recently concluded landing drills, known as Blue Chromite 18, in Okinawa.