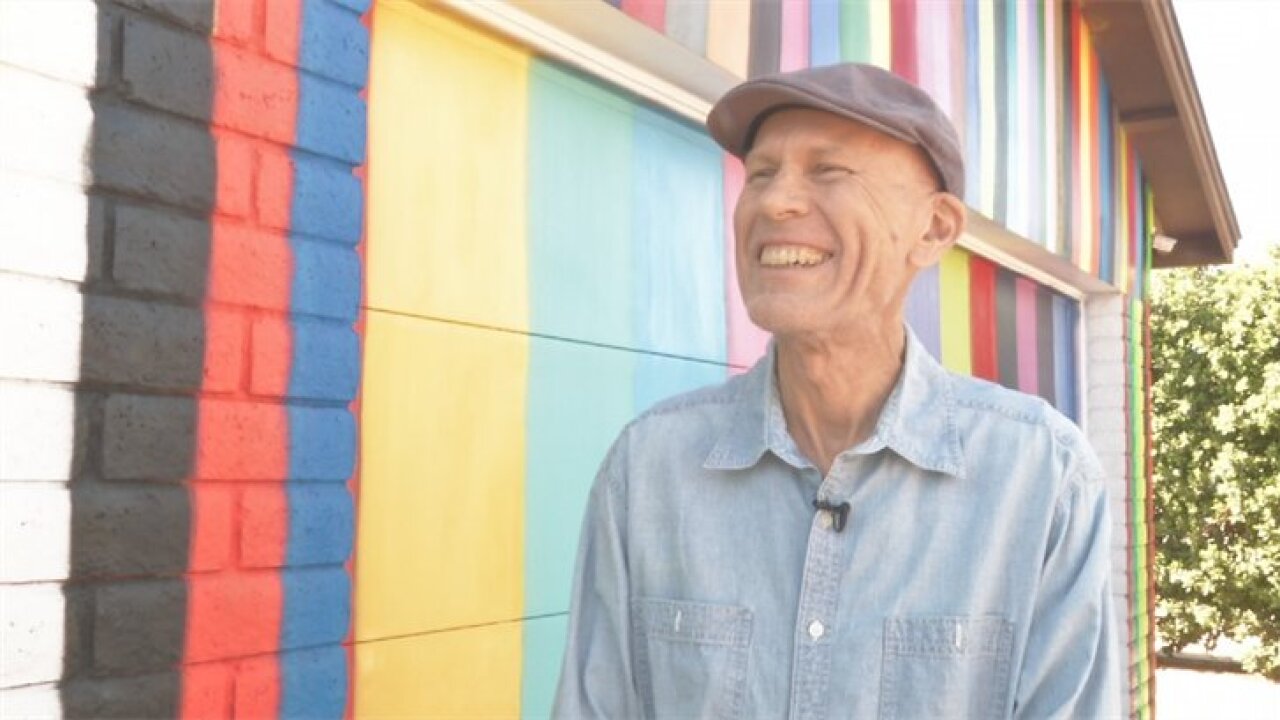 Ernest Leas is a retired Phoenix firefighter of 37 years. He’s lived in his Peoria home for 15 years, but it was only last year, that he decided to add what he calls artwork to his home.

Peoria, Arizona (KPHO/KTVK) — One Peoria man transformed his home into something very unconventional, and not all of his neighbors are embracing the look.

Ernest Leas is a retired Phoenix firefighter of 37 years. He’s lived in his Peoria home for 15 years, but it was only last year, that he decided to add what he calls artwork to his home.

One hundred different colors, 70 cans of paint, and one week later, a home near 75th Avenue and Cactus was covered in a rainbow of stripes.

“I get my ideas by looking at the work that other artists do around town,” said Ernest Leas.

Leas is a retired Phoenix firefighter of 37 years. He’s lived in his Peoria home for 15 years, but it was only last year, that he decided to add what he calls artwork.

He shared a photo of his home with a middle finger painted on it.

“Normally a middle finger is a derogatory symbol. Did that upset anyone in this neighborhood?” asked Kim Quintero of AZ Family.

“We started receiving a number of complaints from neighbors, about a variety of things. It started out with an obsene painting on a door,” said Jay Davies, deputy director at Peoria Police Department.

Leas was cited by Peoria police for disorderly conduct because of the painting, but charges were turned down by the prosecutor. Leas later replaced the middle finger with a mural.

“A lot of derogatory terms, a lot images, a lot of graphics, a lot of text, that looked like really, the house had been tagged from one end to the other,” said Davies.

Again, Peoria police stepped in. The City enforced their sign ordinance, which prohibits homes and businesses from displaying any sign larger than a 2-square-foot area.

Leas argued his mural was inspired by artwork seen in Downtown Phoenix’s Roosevelt Row. Nonetheless, Leas complied and most recently painted over his home with the rainbow stripes.

After hearing about the home, Peoria resident Rochelle Roper and several others came over to Leas’ home Thursday morning to take a look.

“I would love to live right next to him. I would love to wake up and come out and say, ‘hey how you doin,’ because he’s an awesome person, and this is upbeat color, you know, color of the rainbows,” said Roper.

The man who does live next door did not share the same feelings.

Domas has been Leas’ neighbor for 13 years. He says Leas has ulterior motives behind the paint.

“He’s trying to irritate everybody, tick them off to the point that they sell, and that’s exactly what they’re doing,” said Domas.

Domas says he upset Leas years ago, when he had Cox cable company dig under his property to add a line for his home.

“And he was insane. Took me for a loop, I said, ‘Ernie, what’s your problem?’ He called me every name in the book, just going crazy,” said Domas.

“There have been neighbors who have moved out of this neighborhood recently, but this is probably the most peaceful neighborhood I’ve ever lived in, and I love all my neighbors and they all love me,” said Leas.

Peoria police say they’ve visited Leas and Domas’ neighborhood multiple times for verbal confrontations, and even offered a free neighborhood mediation service to help them work through their differences, before the disbute got worse. Not everyone involved agreed to participate, so it didn’t happen.

“It’s always best to talk through problems with your neighbors. These things have a way of escalating,” said Davies.

“Have you guys tried to talk about it?” asked Quintero.

“If they want to be friends, I can’t help them. There are just certain things you can’t forgive, and I don’t forget,” said Leas.

The City of Peoria does not have any ordinances that address the particular paint colors of homes, for now.