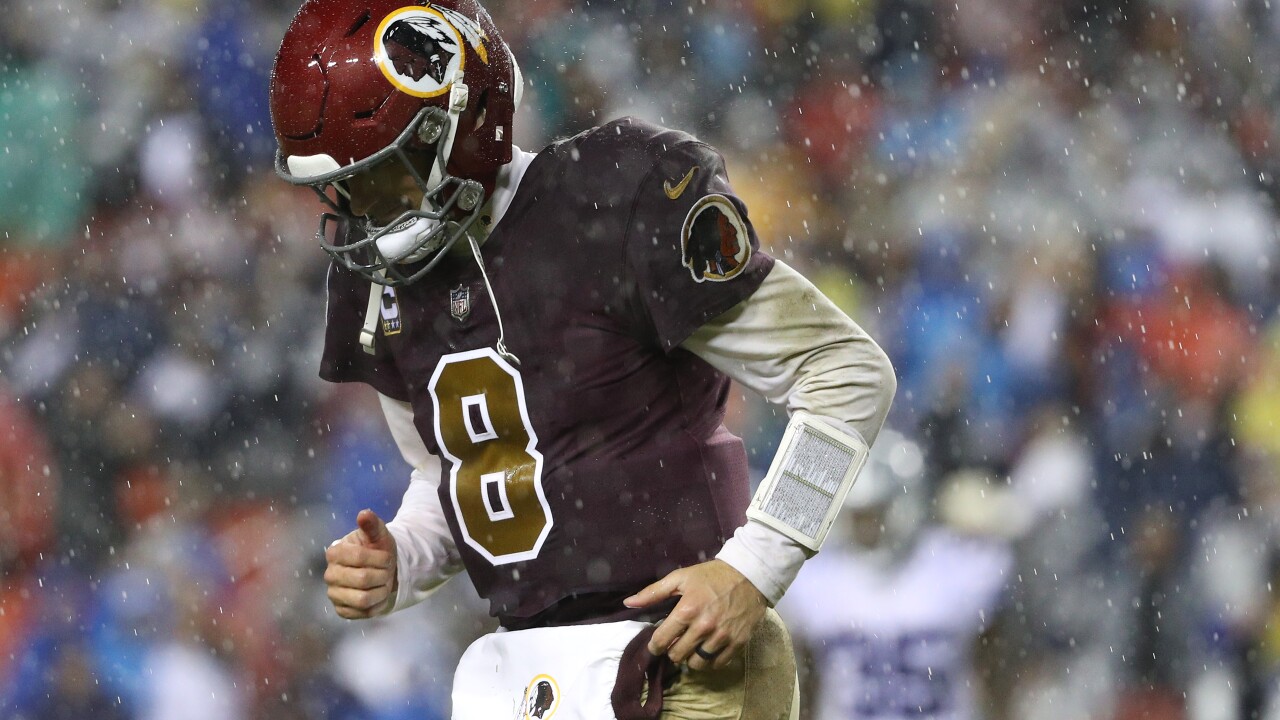 Running back Ezekiel Elliott runs for a touchdown. (Photo by Patrick Smith/Getty Images)

LANDOVER, Md. – The Cowboys scored 19 unanswered points to erase an early Redskins lead and beat Washington 33-19 in a game played during a downpour Sunday at FedEx Field.

The Redskins fall to 3-and-4 on the season and 0-and-3 vs. NFC East division teams. Dallas improves to 4-and-3 on the year.

“We do have a lot of injuries, especially offensively, but we just have to step up,” Redskins head coach Jay Gruden said after the game. “That’s just part of the game. Six of your top seven – or seven of your top eight – offensive linemen not playing makes it a little more difficult and then two of your three tight ends, but … we’ve got to recover.”

Playing without three starting offensive linemen, out with injuries, the burgundy and gold led Dallas 13-7 late in the first half before the Cowboys scored 19 unanswered. The run began with 3:19 to play in the second quarter when Dallas blocked a Nick Rose field goal that could’ve put Washington ahead 16-7. The Cowboys’ Orlando Scandrick returned the blocked kick 86 yards to the Redskins four yard line. Two plays later, Ezekiel Elliott scored his second of two touchdowns on the day to complete the 10 point swing.

For the game, Redskins quarterback Kirk Cousins completes 26-of-39 passes for 263 yards, one touchdown and one interception. His lone interception was returned for a touchdown by Byron Jones with 21 seconds left in the game to seal the contest.

In addition to the late interception and blocked field goal, the Redskins lose two fumbles (on back to back touches) during Dallas’s 19-to-0 run when Cousins and Chris Thompson turned the ball over to Dallas.

The burgundy and gold finish with 285 total yards, but just 49 of the rushing variety on 15 carries. In comparison, Dallas rushed for 169 yards on 39 attempts.

“At the end of the day, you can see a successful Redskins game when you look at the run-pass ratio,” Gruden said. “If it was lopsided like it was today, you probably look at a loss and very few times will we win those games. We need to be balanced to be successful. So, yes, I wish I had that back.”

Washington travels to 5-and-2 Seattle, a team yet to lose at home, for a 4:05pm kickoff next Sunday.