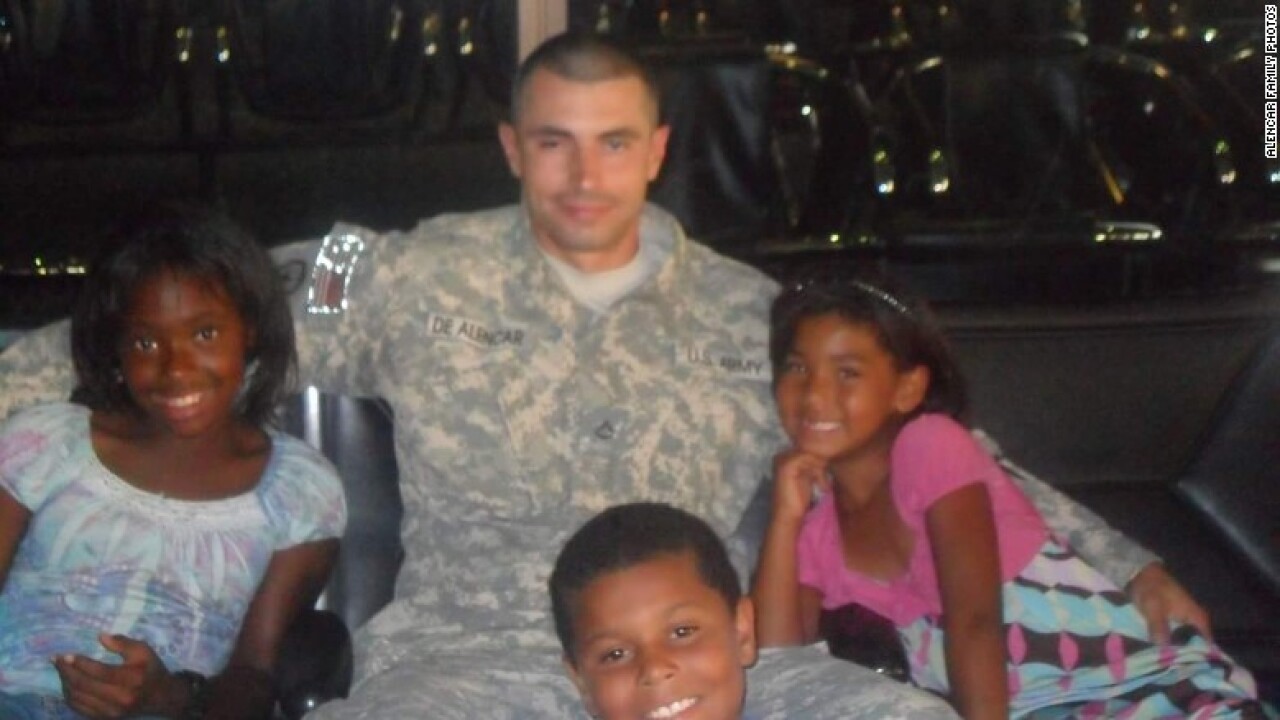 Natasha De Alencar was sitting at home after a trip to Walmart in April when a phone rang. It was President Donald Trump, and he wanted to talk about her husband.

The member of the 7th Special Forces Group died April 8 — the first American killed in combat in Afghanistan this year, according to Pentagon records. His unit came under fire by “enemy forces” in Nangarhar province, it said.

A total of 2,258 American service members have died in Afghanistan since the 2001 invasion.

“On April 10, we went to Dover Air Force Base to welcome my husband back home with our whole family. But this time it was not a celebration,” De Alencar told CNN on Thursday night.

Two days after the arrival of her husband’s body, Trump called as she sat with an Army casualty officer.

‘Men like in the movies were at our front door’

De Alencar’s world changed on that day in April. Her daughter had gone to the car to retrieve her phone when she tearfully asked her to come downstairs.

“My daughter … told me that men like in the movies were at our front door,” De Alencar said.

She paced up and down the stairs before finally going to the door of their home at Eglin Air Force Base in Florida.

When she got there, two men from the Army told her that her husband had been shot dead in Afghanistan. They said an Army casualty assistance officer would be sent to her house shortly.

“He celebrated his 37 birthday on April 1, and seven days after his birthday, he was dead,” she said.

“Natasha,” Trump said in the call filmed by her children and in the video that De Alencar provided to CNN on Thursday night.

“I’m so sorry to hear about the whole situation. What a horrible thing. … He’s an unbelievable hero and you know all the people that served with him are saying how incredible he was ,” Trump said.

Trump has been under fire in recent days over his handling of condolence calls, but De Alencar said the President was gracious. He researched her husband before he called and was familiar with the awards he had received, she said.

She described herself as a Democrat who does not “do politics.” As a father himself, she said, Trump appeared to understand the magnitude of her loss. In the call, Trump talked about her children, especially her oldest son, who plays college football.

“It became nothing about politics but a person who understood, and that is what he gave to us,” De Alencar said.

‘Their father was a great hero’

The conversation lasted about five minutes, she said. Before it ended, Trump gave her a message for her children.

“Tell them their father was a great hero that I respected,” Trump said.

The President told De Alencar to take care of herself and extended an invitation to visit the White House. “If you’re around Washington, you come over and see me in the Oval Office,” he said.

De Alencar said it was important to record the call.

“All you got is memories and having the commander in chief call you for five minutes is an important memory,” she said.

Mark and Natasha De Alencar got married in 2008 after 15 years together. The son of an Army veteran, he served in the military for 10 years.

“He is the most amazing, humblest and very soft-spoken,” she said. “He was a Ranger and a Green Beret. He made you want to do better. I am a better mother and woman because of him.”

De Alencar declined to comment on the controversy surrounding Trump following the deaths of four US soldiers in Niger this month.

Earlier this week, US Rep. Frederica Wilson accused Trump of being insensitive to the widow of one of the soldiers killed in Niger. The Democrat from Florida said the President told the widow in a condolence call that her husband “knew what he signed up for, but I guess it still hurt.”

De Alencar said she understands what the soldiers’ families are going through.

“I know they are hurting and they don’t know what the future holds,” she said. “That is the only thing I can comment on from my heart because that is what I know is true.”

During an appearance on CNN’s New Day on Friday, De Alencar passed along condolences to the families of the four men, describing them as American heroes.

They paid “the ultimate sacrifice like my husband did,” she said.

De Alencar was asked whether she was getting everything she needed from the military, such as timely insurance and other benefits.

“Without a glitch, I’ve been blessed,” she said.

De Alencar said she has been overwhelmed by the “very uplifting” support from the community as well as the Army.

“There are no words,” she said. “I’m still getting people sending me letters and emailing me, ‘Your kids are in our thoughts today. Please don’t hesitate if you need something.’ “