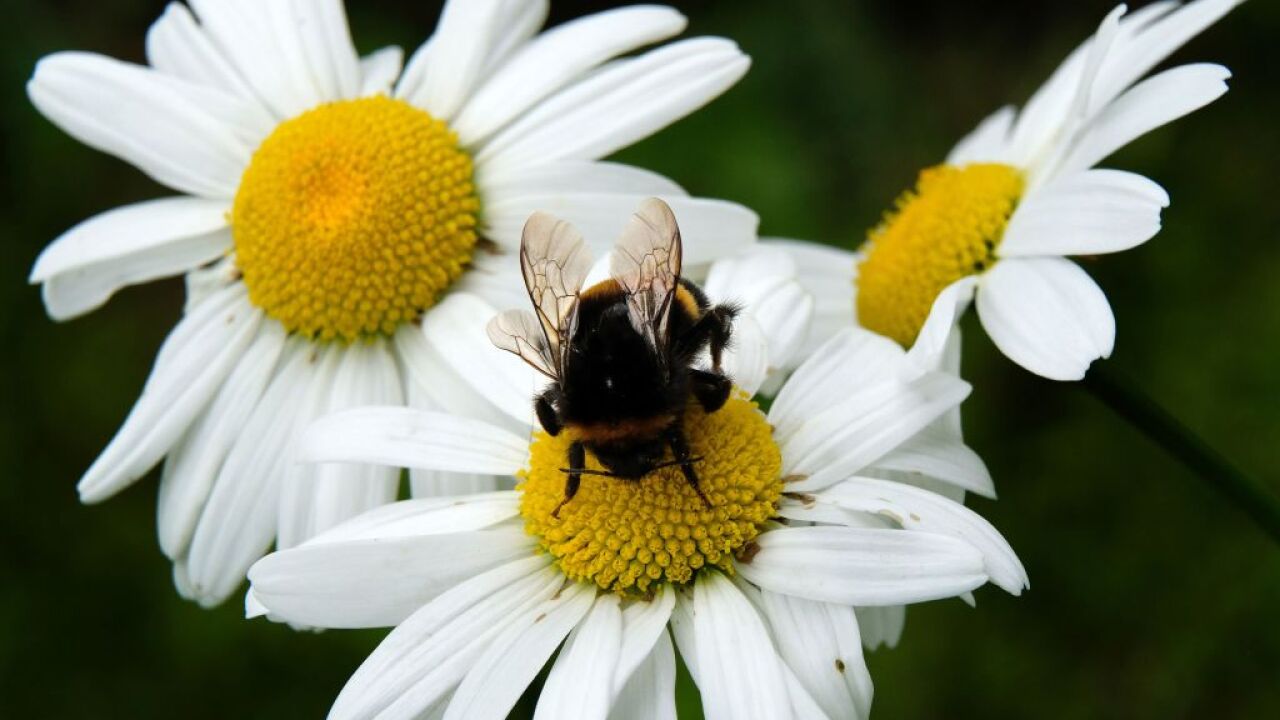 A bumblebee gathers pollen from a flower in a garden outside Moscow on June 26, 2017. / AFP PHOTO / Yuri KADOBNOV (Photo credit should read YURI KADOBNOV/AFP/Getty Images)

A new scientific study has found “dramatic” and “alarming” declines in insect populations in areas in Germany, which researchers say could have far-reaching consequences for the world’s crop production and natural ecosystems.

The study, published on Wednesday in peer-reviewed journal PLOS One has found that, in German nature reserves, flying insect populations have declined by more than 75% over the duration of the 27-year study.

“The flying insect community as a whole… has been decimated over the last few decades,” said the study, which was conducted by Researchers from Radboud University in the Netherlands and the Entomological Society Krefeld in Germany.

“Loss of insect diversity and abundance is expected to provoke cascading effects on food webs and to jeopardize ecosystem services.”

Co-author Caspar Hallman said he and his colleagues were “very, very surprised” by the results.

“These are not agricultural areas, these are locations meant to preserve biodiversity, but still we see the insects slipping out of our hands,” he told CNN.

Entomologists have long had evidence of the decline of individual species, said Tanya Latty, a research and teaching fellow in entomology at Sydney University’s School of Life and Environmental Sciences.

However, few studies have taken such a broad view of entire insect populations, she says.

“This study lumps all flying insects together,” she said, which gives researchers a more accurate picture of the overall decline.

“If you see these sort of dramatic declines in protected areas it makes me worry that this (trend) could be everywhere,” she said.

“There’s no reason to think this isn’t happening everywhere.”

Hallman said he hoped the study could be “repeated in other parts of the world.”

The long-term study used Malaise traps — a sophisticated kind of insect net which catches a wide variety of insects — set up in 63 German nature protection areas over the course of 27 years.

By measuring the weight of the insect catch — known as the biomass — from each of the Malaise traps, researchers were able to ascertain the drop in insect numbers.

The study reported a seasonal decline of 76%, and mid-summer decline of 82% in flying insect biomass over the 27 years of study.

“We show that this decline is apparent regardless of habitat type,” the study says.

Latty says it’s particularly worrying that the study recorded the declines in protected areas, meaning that for agricultural or urban areas the trend could be even more pronounced.

The report suggests climate change, loss of insect habitats and potentially the use of pesticides, are behind the alarming decline. Latty says it’s unlikely there’s one “smoking gun,” but rather a combination of contributing factors.

Latty says the importance of insects — which make up around 70% of all animal species — is underestimated.

“We don’t often think about insects other than ‘eww, an insect.’ But these are the organisms running the world.

“Insects pollinate the crops we eat, they contribute to pest control, we’d have to use more pesticide. They’re even crucial in waste control — most of the waste in urban areas is taken care of by ants and cockroaches.”

Insects, she says, are “crucial” to biodiversity, and “we exist because of biodiversity.”

Species who rely on insects as their food source — and, up the food chain, the predators which eat these animals — are likely to suffer from these declines. Pollination of both crops and wild plants are also affected, as is nutrient cycling in the soil.

Indeed, “ecosystem services provided by wild insects have been estimated at $57 billion annually in the USA,” the study says, quoting an earlier study.

Latty says she hopes the decline is reversible.

“The first step is acknowledging that we have a problem, and working to correct that — how do we design our agriculture to encourage insects? It could be something as simple as growing wildflowers along the edges of fields.”

She says we also need to improve people’s education around insect populations — “that insects are important, absolutely crucial to our survival,” and to deal with pests sensibly.

“There’s so much going on out there, it’s a struggle to convince people that insects are important. We’ve probably only identified only 10% of insects and some are going extinct before we can even name them.”