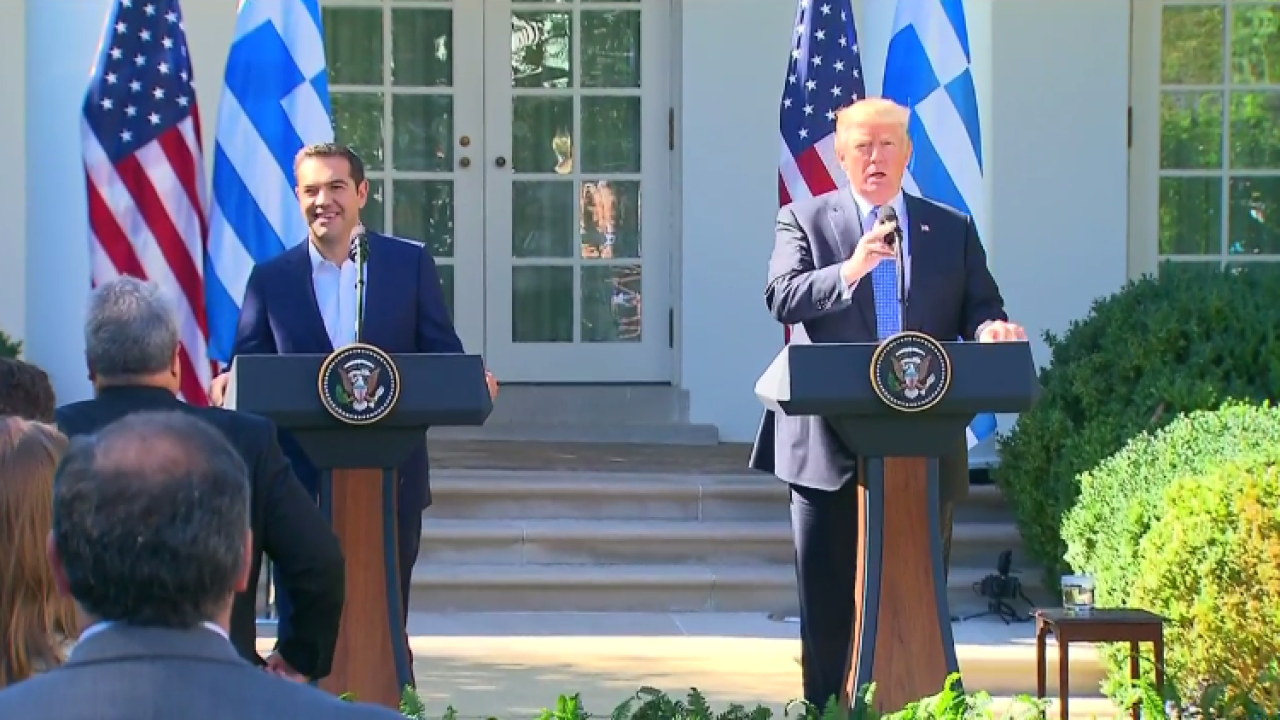 When President Donald Trump sits for talks Tuesday with his left-wing Greek counterpart Alexis Tsipras, he’ll face a man who last year warned his own citizens that Trump represented an “evil” raft of ideas with no place in western democracy.

Greek Prime Minister Alexis Tsipras waits for a meeting with US President at the Maximos Mansion on November 15, 2016 in Athens. (Photo credit should read BRENDAN SMIALOWSKI/AFP/Getty Images)

Now that Trump is President, Tsipras finds himself among the club of world leaders hoping to paper over their election-year criticisms of the billionaire businessman, who is known to carry a grudge and remember even the smallest slight.

In Tsipras, Trump finds a socialist leader whose country has relied on international financial support for years in the face of a crippling debt crisis — a scenario that squares poorly with Trump’s stated views that countries should bear responsibility for their own affairs.

But with the US embroiled in an increasingly bitter standoff with Turkey, Trump finds a willing security partner in Athens at a moment of deep regional instability. And despite its financial woes, Greece is one of the few NATO members that meets the alliance’s defense spending threshold — an issue Trump has litigated vociferously.

The White House said ahead of the visit that Trump and Tsipras would discuss defense and economic issues, as well as energy security and the cultural ties between Americans and Greeks.

They’ll also take questions from reporters following their meeting, where Tsipras’ past comments about his now-counterpart could arise. During a speech in March 2016, the prime minister expressed disbelief that Trump could even be elevated as the status-bearer of the Republican party.

“Tell me who of you would believe a few months ago that in the US today, the front-runner on behalf of the Republicans for the nomination of the candidate President would be Mr. Trump?” Tsipras asked. “And, of course, what this nomination marks, the ideas it represents, the appeal it reaches and the threat to become even President — I hope we will not face this evil.”

“To be honest, I know very little of Donald Trump. I got to know his aggressive manner and the manner in which he defended some unconventional points of view during the election period,” he said during a news conference held several days after Trump’s victory.

Tsipras was first elected in 2015 on a wave of anti-austerity sentiment after years of harsh reforms enforced by Greece’s bankrollers in Europe. At 40, he came into office as one of the world’s youngest leaders and — as a former communist — one of its most left-leaning.

Since he took office, Greece’s financial situation has stabilized somewhat, and the violent protests that erupted periodically during the long periods of enforced hardships subsided.

The return to relative financial stability coincided with increasing instability in Turkey, Greece’s neighbor across the Aegean Sea, where President Recep Tayyip Erdoğan has taken controversial steps to consolidate power while deepening rifts with Washington. Last week, a US consular staff member was arrested in Istanbul, which prompted the US to freeze non-immigrant visa services.

Tsipras has viewed the diplomatic crisis as an opening to further warm ties with the US, even if his partner is a political opposite.

During his trip to the US, Tsipras was also due to talk with Christine Lagarde, head of the International Monetary Fund, to discuss the body’s protracted involvement in Greece’s finances. Tsipras is also set to gauge Trump’s stance on the matter, which has plagued the country for years.

During remarks in March, Trump praised the Greek-American community during a celebration of Greece’s independence day.

“I love the Greeks. Oh, do I love the Greeks,” he said in the White House East Room. “Don’t forget, I come from New York. That’s all I see, is Greeks. They are all over the place.”

He also praised his then-chief of staff Reince Priebus, a Greek-American, who he’d once joked he would name his ambassador to Athens. Priebus was replaced as chief of staff in July, and Trump has so far kept his predecessor Obama’s pick in the ambassador post.