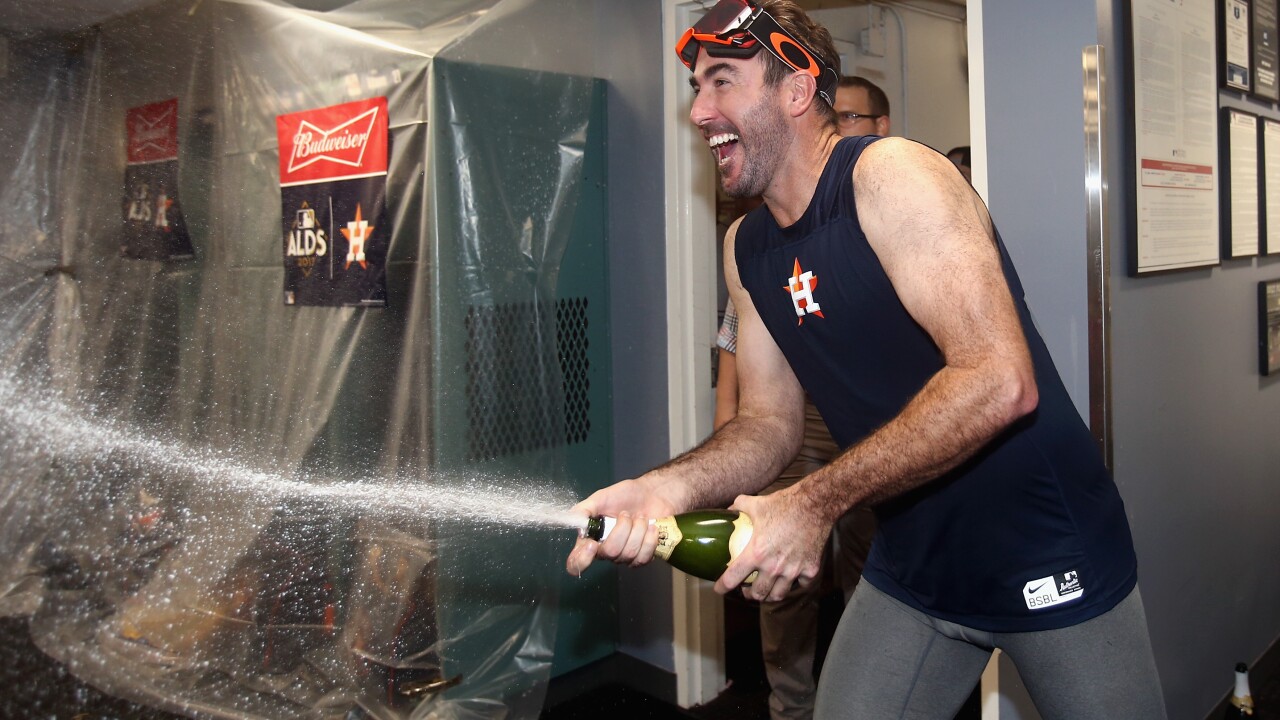 Justin Verlander throws a pitch in the fifth inning. (Photo by Elsa/Getty Images)

BOSTON, Mass. – A first for Justin Verlander produces a first for the Astros.

Former Old Dominion University star Justin Verlander, making his first ever major league relief appearance, helps pitch his Houston Astros to their first ever American League Championship Series Monday. Verlander earned the victory in relief as the Astros eliminated the Boston Red Sox three games to one with a 5-4 victory at Fenway Park.

Verlander, a veteran of 13 MLB seasons, had never come out of the bullpen in a regular season or postseason game. However, with Houston leading Boston 2-1 in game 4 of the American League Division Series, Astros manager A.J. Hinch went to his newly-acquired ace in the fifth inning.

“Justin Verlander wanted the ball,” Hinch admitted after the game. “He was very good about preparation. It did cut out of his routine, which is the one thing you question. He’s been doing this routine for 13 years, but he comes in and has the emotion of the home run, and just like that, kind of a lesser man might have caved in that situation because of the big moment, woke up the crowd, Benintendi’s circling the bases.”

The first batter Verlander faced, Andrew Benintendi, clubbed a go-ahead two run home run to put Boston ahead 3-2. But that was the only hit Verlander allowed in 2.2 innings pitched.

“It’s very easy to go to the bullpen and leave Justin Verlander out of it,” Hinch added. “But our job’s to try to win, it’s not to try not to lose. And we had an opportunity to do that, when it doesn’t work out, as long as I’m prepared, as long as I feel like I did the right thing by what our plan was, then I can live with the result. Doesn’t make you feel any better when Benintendi’s running around the bases, that’s a pretty low moment for a manager, probably just under the pitcher. But I’m proud of the fight that these guys have and, quite honestly, it’s just a staple of who we are.”

Verlander, who never pitched in relief in 46 career appearances at ODU, earned the victory as the Astros scored two runs in the top of the eighth inning to take the lead back for good. He also earned the win in game one of the best of five series.

The native of Richmond, VA left ODU as the all-time strikeout king in ODU, CAA and the Commonwealth of Virginia history with 427 strikeouts in 335.2 innings.

The Tigers selected Verlander with the number two overall pick in the 2004 MLB Draft. His jersey was retired by ODU in 2010 and he was inducted into the ODU Sports Hall of Fame in 2012. Houston traded for the former MVP, who had spent his entire career with Detroit, September 1st.