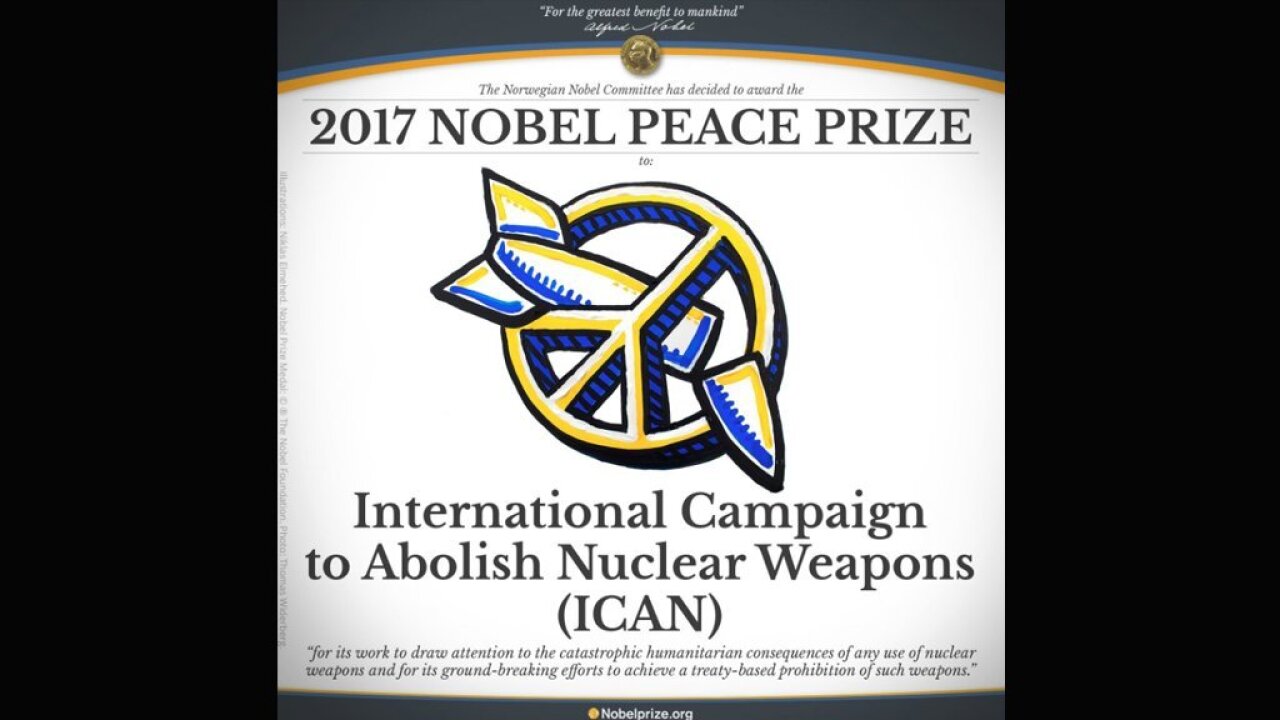 The 2017 Nobel Peace Prize was awarded Friday to the International Campaign to Abolish Nuclear Weapons.

The 2017 Nobel Peace Prize was awarded Friday to the International Campaign to Abolish Nuclear Weapons.

The Norwegian Nobel Committee said ICAN was receiving the award for its “work to draw attention to the catastrophic humanitarian consequences of any use of nuclear weapons and for its ground-breaking efforts to achieve a treaty-based prohibition of such weapons.”

Nobel committee president Berit Reiss-Andersen praised the work of ICAN at a time when tensions remain high over North Korea’s nuclear weapons testing and as the Iran nuclear deal has been called into question by US President Donald Trump.

“Some states are modernizing their nuclear arsenals, and there is a real danger that more countries will try to procure nuclear weapons, as exemplified by North Korea,” Andersen said.

ICAN, a coalition of non-governmental organizations in 100 countries, said that it was a “great honor” to have been recognized for its role as a driving force behind the United Nations Treaty on the Prohibition of Nuclear Weapons, which was adopted on July 7 with the support of 122 nations.

The United States, United Kingdom, France, Russia and China — the five permanent members of the UN Security Council, all of which have nuclear arsenals — did not participate in the treaty negotiations.

“The belief of some governments that nuclear weapons are a legitimate and essential source of security is not only misguided, but also dangerous, for it incites proliferation and undermines disarmament,” ICAN said in a statement. ” All nations should reject these weapons completely — before they are ever used again.

“This is a time of great global tension, when fiery rhetoric could all too easily lead us, inexorably, to unspeakable horror.

“The specter of nuclear conflict looms large once more. If ever there were a moment for nations to declare their unequivocal opposition to nuclear weapons, that moment is now.”

Beatrice Fihn, the organization’s chief executive, was left stunned by the announcement, telling reporters she thought it was a “prank” after receiving a phone call from the Nobel Committee just moments before the announcement.

But she said the award of the prize to her organization was “hugely important” in the quest to abolish nuclear weapons.

“I think it’s hugely important that we raise awareness of this issue and this treaty, the treaty on prohibition of nuclear weapons, has declared that kind of behavior illegal,” she told reporters in Geneva.