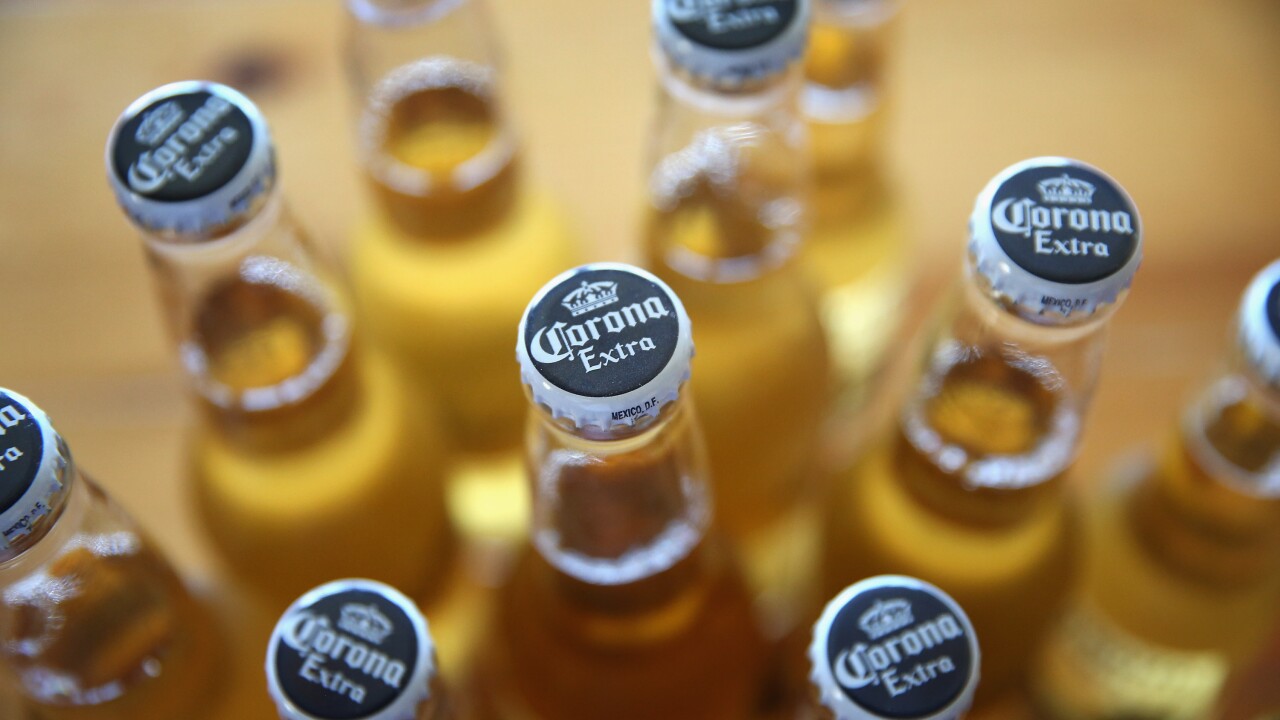 CHICAGO, IL – JUNE 07: In this photo illustration, bottles of Corona beer are shown on June 7, 2013 in Chicago, Illinois. Constellation Brands, one of the world’s largest wine companies, is expected to become the third-largest beer supplier in the United State today with a $5.3 billion purchase of the U.S. distribution rights of Grupo Modelo beers from Anheuser Busch InBev. Corona Extra, brewed by Grupo Modelo, is the number one selling imported beer sold in the United States and the number six selling beer overall. (Photo Illustration by Scott Olson/Getty Images)

Constellation shares are now up more than 35% since the start of the year.

It’s a bit of a surprise: Some investors feared that the election of President Trump would hurt the company because of its ties to Mexico.

Shares fell nearly 15% between Election Day and early January as investors worried about higher tariffs. Trump’s rhetoric about wanting to build a wall on the border with Mexico didn’t help.

Investors no longer seem so concerned. In fact, the weaker peso helped boost Corona sales in the quarter, according to a report by Susquehanna International Group analyst Pablo Zuanic. A weaker peso makes products exported from Mexico to the United States cheaper in dollar terms.

Tequila maker Jose Cuervo went public on Mexico’s stock exchange in February, and demand was strong, partly because of hopes that sales would keep benefiting from a weaker peso.

It remains to be seen how much of a boost Constellation will get from here. Chief financial officer David Eric Klein told analysts that the company is hedging its currency investments guard against fluctuations in the peso.

But Constellation is still benefiting from strong sales not just for Corona but for other Mexican beers it owns, like Modelo. Total beer sales rose nearly 13% in the quarter from a year ago. One fund manager is predicting even better times ahead.

“The growth of the spirits industry is a global story, and Constellation’s results certainly speak to that fact,” said David Bolton, president of Spirited Funds, which helps run the Spirited Funds/ETFMG Whiskey and Spirits ETF.

And the company is taking advantage of booming demand for microbrews and craft beers. Constellation bought the Funky Buddha brewery this summer. It also owns Ballast Point.

Constellation rival Anheuser-Busch InBev is riding the same trend. The Budweiser and Stella Artois brewer has been on a buying binge lately, scooping up Goose Island, Blue Point and several other craft beer brands in the past few years.