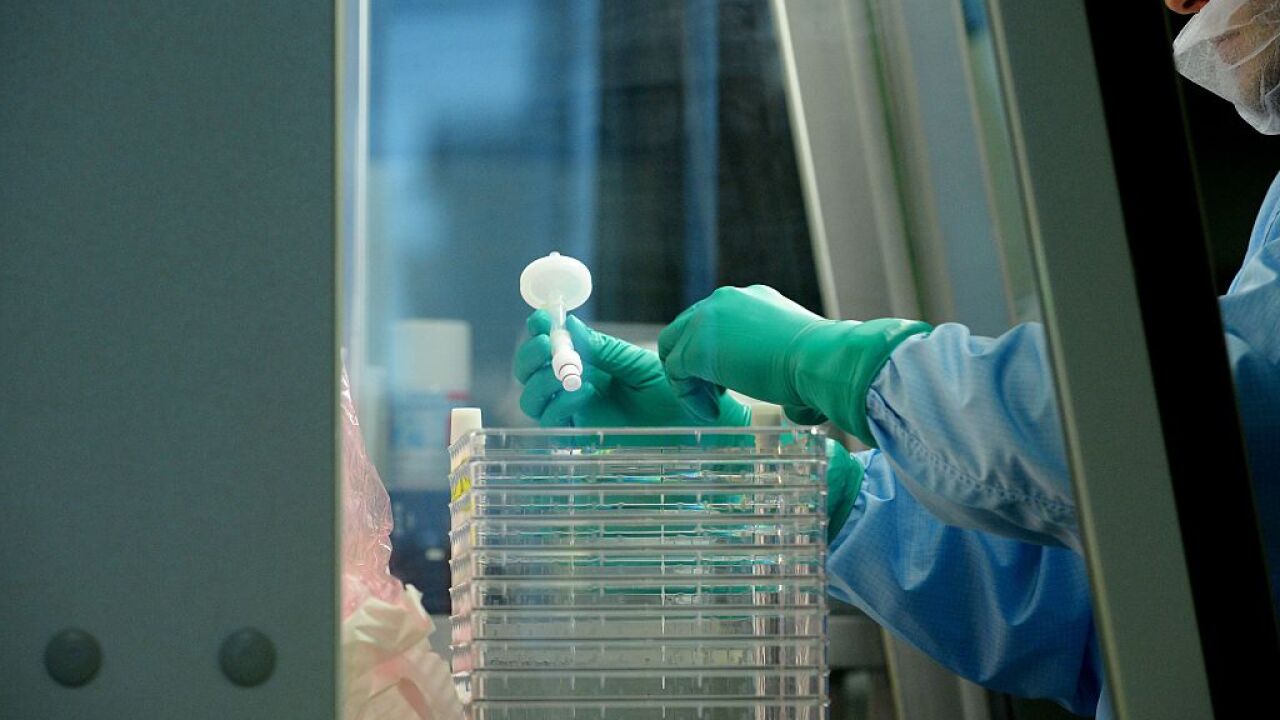 A laboratory staff works at the industrial platform of YposKesi , the first French industrial pharmaceutical company producing gene and cell therapy drugs for rare diseases on November 17, 2016 in Evry, near Paris. The AFM-Telethon, which was created 58 years ago, started a lab of gene therapy Genethon Bioprod in 2013 in the scientific park of the Genopole of Ivry. The Telethon will take place on December 2 and 3, 2016. / AFP / ERIC PIERMONT (Photo credit should read ERIC PIERMONT/AFP/Getty Images)

In the future, it might be possible to prevent inherited illnesses by making a change to a single faulty gene. That was recently demonstrated in a new study.

For the first time, scientists used a controversial gene-editing technique called base editing to correct a gene mutation in human embryos linked to the hereditary blood disorder beta thalassemia, according to the study published in the journal Protein & Cell in September.

A change to a single base pair in your genetic code, known as a point mutation, can cause beta thalassemia.

The scientists noted that the efficiency of repairing mutations in the study was only about 20% — so they were not 100% successful in effectively editing all of the embryos all of the time. Yet the study findings and the base editing technique are now gaining international attention.

The base editor technique is similar to the powerful gene-editing tool called CRISPR, but there is a major difference.

Base editing uses some of the components of CRISPR, but directly makes changes to a targeted site in DNA without cutting the DNA, said David Liu, core institute member of the Broad Institute and professor of chemistry and chemical biology at Harvard University, who was not involved in the study.

When a cut is made in genomic DNA using the traditional CRISPR approach — for instance, to disrupt a mutation — the primary response of a cell is to repair the cut and, in the process, disrupt the DNA at the cut site, Liu said.

“But many human genetic diseases are caused by single point mutations that need to be precisely corrected, rather than disrupted, in order to treat or study the corresponding disease,” Liu said. That’s where base editing comes in.

“Base editing, in contrast, does not make a double-stranded cut in the target DNA. Instead, base editors directly perform ‘chemical surgery’ on the target DNA base to convert one base pair to a different base pair, that is, to make a point mutation,” said Liu, whose research group at Harvard developed base editing.

“It’s important to note that compared to traditional nuclease-mediated genome editing methods such as the use of CRISPR-Cas9, base editing is a complementary — not necessarily better — approach, and each approach has its strengths and preferred applications,” he said.

About two-thirds of known human genetic variants associated with diseases are point mutations, so base editing has the potential to correct or reproduce such mutations for research purposes, Liu said.

‘The future is here’

In 2015, some of the same scientists in China were the first to reveal attempts to modify genes in human embryos using CRISPR. Three separate studies were published in scientific journals describing Chinese experiments involving gene editing in human embryos.

Last month, a separate team of researchers described how gene editing corrected a gene mutation linked to inherited heart conditions in human embryos. They published their work in the journal Nature.

“For many years, we have been saying that direct gene editing in embryos is some way in to the future. Now the future is here and there is much to consider,” said Darren Griffin, professor of genetics at the University of Kent in Canterbury, England, in a written statement released by the Science Media Centre.

“The paper itself represents a significant technical advance because, rather than using the classic CRISPR-Cas9 technology previously reported, the current ‘base editor’ technology is an adaptation that chemically alters the DNA bases themselves,” Griffin said about the new study, of which he was not involved.

The four chemical bases, or building blocks, of DNA are adenine (A), guanine (G), cytosine (C) and thymine (T). Those bases pair up with each other, A with T and C with G, to form units called base pairs.

Beta thalassemia can be due to mutations that convert A to G in a particular location in the HBB gene, the scientists noted in the study, in which they used base editing to try to convert G back to A.

“While this is undoubtedly a highly significant advance, it is important not to get carried away about its widespread utility if put into clinical practice,” Griffin said.

“An embryo would still need to be diagnosed as abnormal (if there were other embryos in the cohort that were normal they would presumably be used instead), then the base editor applied, then re-diagnosed to make sure that it had worked,” he said. “In the meantime, the ethical implications of gene manipulation in embryos need a thorough examination where safety is of paramount concern.”

The new study involved base editing experiments in cells from beta-thalassemia patients and human embryos. Cloned human embryos were generated in a lab using a technique called nuclear transfer. A total of about 20 embryos were harvested.

Without treatment, patients with the more severe type, known as beta thalassemia major, usually die before age 5, the scientists wrote in the study.

“Our data highlight the tremendous potential of correcting homozygous disease and compound heterozygous mutations by base editing in human somatic cells and embryos,” the scientists wrote. “Although we did not achieve 100% repair in human embryos, we and other groups have reported 100% base editing in mouse embryos.”

The scientists noted that the base editing wasn’t uniform across all cells in the embryos, resulting in mosaic embryos. They also noted in the study that more research is needed to improve the safety of this base editing approach, especially before base editing is ready to use in humans.

“The efficiency of editing was quite low, and the embryo was mosaic as it developed, meaning that only some cells had the hoped-for base change. Both of these inefficiencies have to be overcome for the approach to be useful,” said Dana Carroll, a professor of biochemistry at the University of Utah, who was not involved in the study but has used CRISPR in his own research.

“As far as I know, this is the first published study that uses base editing in human embryos, but the embryos are very unusual,” he said, referring to how they were made in a lab. “It seems unlikely that the response to the base editor, and other cellular events, are an accurate reflection of what would happen in a natural embryo.”

Yet Liu pointed out that the same scientists who conducted the new study previously reported efficient base editing in human embryos that were referred to as zygotes, “making me assume they were human embryos from in vitro fertilization that ended up with two sperms in one egg,” he said. “So they already established that base editing can function efficiently in human embryos derived from fertilized eggs.”

A request for comment from some of the scientists was unsuccessful.

All in all, the scientists noted in the new study that technical, ethic, and societal issues still need to be investigated and discussed thoroughly before base editing could be considered for clinical application.

Meanwhile, Liu said that his own research group has generated additional base editors that could expand the capabilities of the gene-editing technique.

“We will be reporting these developments in due course,” he said. “We are hopeful that base editing might advance the study and treatment of genetic diseases, and our laboratory is working hard towards this goal.”