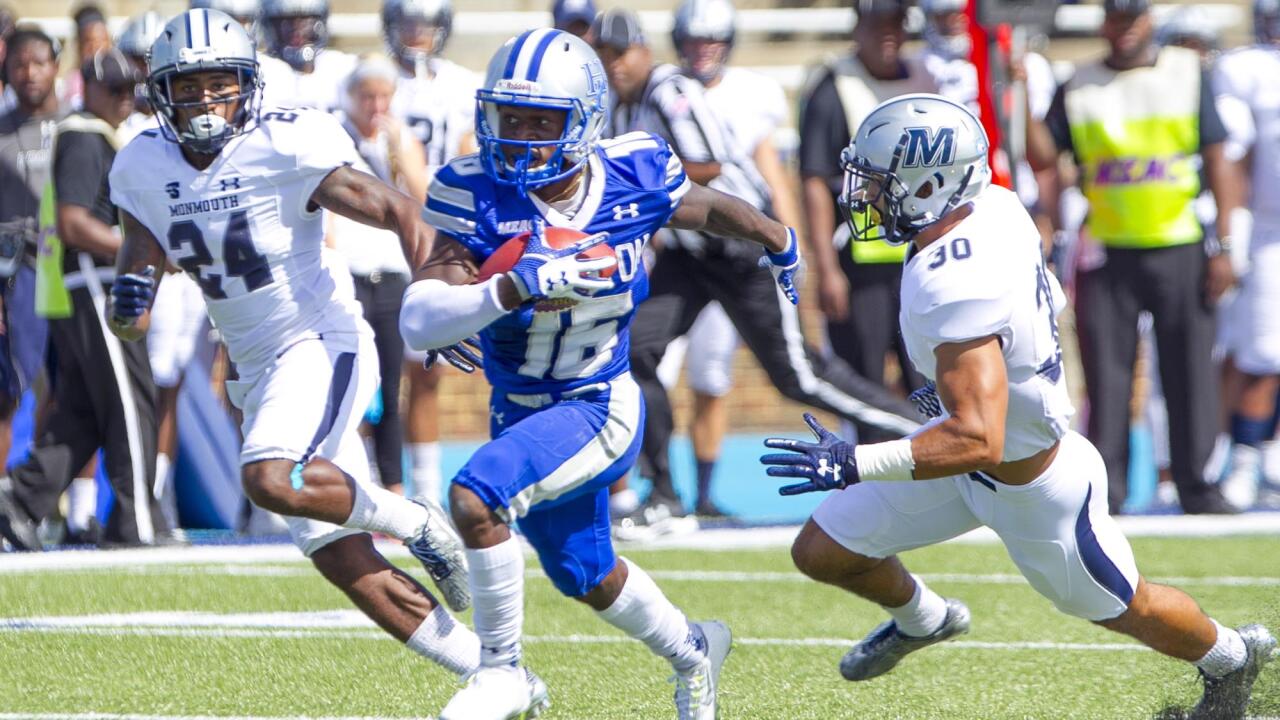 HAMPTON, Va. (Hampton Athletics) – A 25-yard run on the first play of overtime for Monmouth proved to be the final margin as the Hawks defeated Hampton 30-23 in overtime at a steamy Armstrong Stadium on Saturday.

Hampton (2-2) opened the game scoring two touchdowns in the first quarter as Delmon Williams connected with Ronald Bell on a 51-yard scoring pass on the first possession of the game.  The extra-point attempt was missed as Hampton held a 6-0 lead at the 12-minute mark.

Williams finished off a 54-yard scoring drive with a 28-yard run through the middle of the Hawks defense with 6:22 left to put Hampton up 13-0.   The Pirates managed a 37-yard field goal from Adam Brown with 6:48 left in the first half as their final points of the half.

Monmouth (3-1) got on the board with a pair of touchdowns in the second quarter as Devell Jones scored on a three-yard run on the second play of the quarter, while Kenji Bahar connected with Jake Powell on a nine-yard scoring strike with 59 seconds left as Hampton held a 16-14 lead at intermission.

The Hawks used a safety with 3:12 left in the third as a Hampton punt snap sailed through the end zone to even the game at 16-all.  They took a 23-16 lead with 23 seconds left in the third on a one-yard plunge by Erik Zokouri.

Hampton forced a punt with 1:04 left and drove down before the tandem of Williams to Bell connected for a 34-yard scoring strike with 23 seconds left in regulation to tie the game at 23-23.   Zokouri scored on Monmouth’s first play of overtime and their defense held Hampton on fourth down to take the victory.

Williams was the leading rusher for Hampton with 77 yards on 20 carries, while Yahkee Johnson had 66 on 18 attempts.  Through the air, Williams was 17-of-33 with two interceptions for 201 yards and two touchdowns.  Bell was his top receiver with a career-best 13 receptions for 140 yards and two touchdowns. Brendan Cole and Raheim Huskey topped Hampton on defense with 12 tackles apiece.