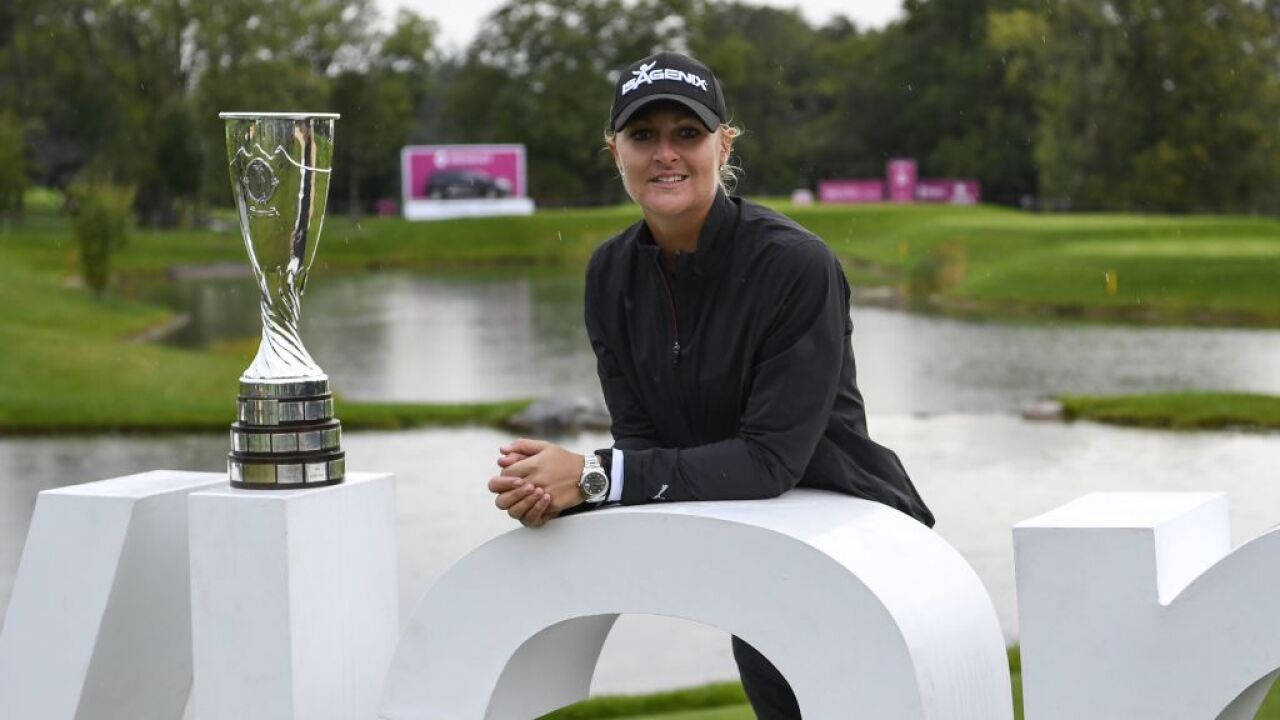 Anna Nordqvist from Sweden poses with her trophy after winning the Evian Championship tournament on September 17, 2017 in the French Alps town of Evian-les-Bains, a major tournament on the women’s calendar. Sweden’s Anna Nordqvist claimed her second major title with a play-off win over American Brittany Altomare at the Evian Championship. / AFP PHOTO / PHILIPPE DESMAZES (Photo credit should read PHILIPPE DESMAZES/AFP/Getty Images)

(CNN) — Anna Nordqvist has claimed the final major of the women’s golf season after winning a sudden-death playoff at the Evian Championship in France.

The Swede saw off America’s Brittany Altomare at the first extra hole after the pair shot final rounds of 66 to finish on nine-under par for 54 holes — heavy rain on day one saw the event at the Evian Resort Golf Club reduced to a three-round tournament.

The heavens opened once more towards the conclusion of Sunday’s play with greenkeepers forced to mop up standing water on the 18th green before the playoff could begin.

Both Nordqvist and Altomare missed the green with their approach shots to the par four, but it was the Swede who remained composed, chipping on before two putting for a bogey five — one better than her opponent — to ensure a silver lining to her day and a winner’s check for $547,500.

“I just felt like I wanted to go out there today and focus on what I could do,” Nordqvist said, LPGA.com reported.

“Winning didn’t really cross my mind until I was having a great couple birdies and eagles there down the stretch.”

Nordqvist laid the foundations for a momentous win in the closing seven holes after starting Sunday’s round five shots off the pace set by Thailand’s Moriya Jutanugarn.

The Swede arrived at the turn one-under for the day before producing some dazzling golf, picking up five shots in as many holes from the 12th onwards. A bogey at the final hole took the gloss off her round but it proved enough to force a playoff.

The 30-year-old has been battling glandular fever in recent months but said she had been inspired by her grandfather’s advice to “never give up” when times are tough.

“I love competing and I prove practicing, and staying in bed hasn’t been the most exciting,” she said.

“My grandpa was always my biggest role model. He always used to tell me to never give up, and that’s what I never did today.”

Jutanugarn, who had led by one going into the final round, ended one shot behind Nordqvist and Altomare after bogeying the final hole.