A museum of blood-sucking nightmares: the US National Tick Collection 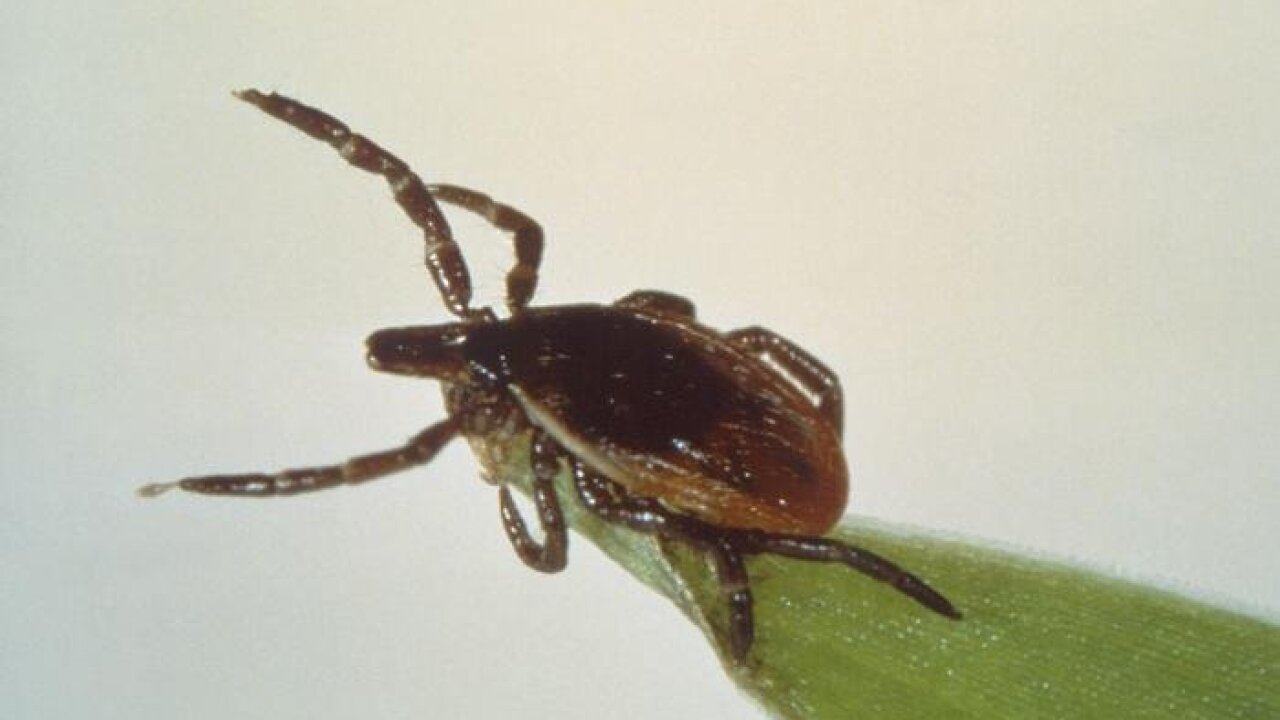 The US National Tick Collection has been housed at Georgia Southern University since 1990. The collection contains over a million specimens, most of the 900 recognized tick species.

To get to the US National Tick Collection, visitors to the campus of Georgia Southern University must descend into the bowels of the Math/Physics Building, where sunlight is absent and locked doors with unpronounceable signs prohibit entry.

Curator Dr. Lorenza Beati, a smiling woman in wire-rimmed glasses and blue jeans, a woman who radiates the same vibe as a kindly, eccentric aunt, welcomes anyone who has daring enough spirit.

Inside the collection, an elaborate camera for shooting closeups of ticks has made its home in a cramped room. It has a strobe-light effect to capture precise images of individual ticks splayed on white backgrounds, and as she operates the camera, Beati’s palce face appears in shadow and light.

She leads the way to a large abandoned-looking space where retro scientific fume hoods, glass beakers and microscopes reside. A narrow hallway is made even more congested by filing cabinets lining both walls. In turn, they are crammed with dusty files and yellowed correspondence from another century.

The main room of the collection is a brightly lit, cheerful place with coloring books and temporary tick tattoos available for the youngest visitors, and immaculate white-metal cabinets holding countless drawers.

Open the drawers to find bottles upon bottles of tick specimens, an endless variety of small, dark forms permanently suspended within clear liquid — a science-fantasy version of prison or hell, depending on a visitor’s horror movie associations.

A trip through tick world

The national tick collection is part of the Smithsonian Institution and is the world’s largest, by every account. Housed at Georgia Southern University in Statesboro since 1990, the collection contains over a million specimens representing 96% of the world’s 900 recognized tick species, including all those found in the United States.

“We keep our ticks preserved in 90% ethanol,” Beati says, emphasizing the word “we.” When kept in ethanol, specimens can last hundreds of years, she says. Dry ticks pinned like butterflies have been known to last 200 years; these should keep even longer.

The collection’s birthplace was Rocky Mountain Laboratories in Hamilton, Montana, in 1905. Some of the specimens are historical artifacts — ticks found on presidents’ dogs or on animals shot by Teddy Roosevelt — but it doesn’t take a fancy pedigree to wow Beati.

“To me, the most basic dog tick can be interesting,” says Beati, also an associate professor of biology at Georgia Southern. All ticks are blood-feeders — that’s their only food, she explains. Some will feed on any of the many terrestrial vertebrates, a category that includes birds, reptiles, mammals and amphibians. Yet other ticks are finicky eaters, such as the rat snake tick, which feeds only on the blood of that particular serpent.

To most of us, ticks may appear to be just another bug, but this is not the case. Unlike insects with segmented bodies that include distinct heads, thoraxes and abdomens, ticks are more like “a unique bag containing all their organs,” Beati says. “Ticks are not insects; they are arachnids.”

With eight legs, they are closely related to spiders and scorpions. Ticks are also mites, a diverse subclass of arachnids. “Ticks are probably the group of mites best known because they transmit diseases,” Beati says.

In fact, the core of the collection was formed in 1905 when scientists discovered that ticks could transmit illness, she explains.

The ancient Egyptians used large ticks with bright, colorful spots on their backs as inspiration for jewelry, Beati says. African ticks feed on large animals and so become the most decorated and most colorful — in some cases, a pure gold hue — among their species, she explains.

Children from the Statesboro area who make the trek to the collection, shepherded by their teachers, often love the colorful ticks, Beati says. They also like the big ticks, those reaching a size of three-quarters of an inch or more.

” ‘Can ticks explode?’ That’s one of the questions they have, because they see them so big,” Beati says. “No. Ticks cannot explode. They know when to stop.

“Ticks are never a favorite of anyone. Usually the first reaction — it’s always, ‘Bew, what are these things?!’ But when we show them how diverse ticks are, how important they are for public health, they become more interested,” she says.

She herself took to ticks only after learning more about them.

“I’m an M.D., and I started studying parasitology in Switzerland, and the specialty of the laboratory where I was studying parasitology was vectors — so all the attributes that transmit diseases to humans or domestic animals, and in particular, ticks,” Beati, a Swiss native, says. “They were discovering at that time Lyme disease in Europe. So it was a really hot topic.”

From the Institute of Zoology in Neuchâtel, Switzerland, Beati’s interest in ticks led her to the World Health Organization’s Collaborative Center for Rickettsial Diseases and Arthropod-borne Bacterial Diseases in Marseilles, France, and then the US Centers for Disease Control and Prevention in Atlanta. She was working at Yale University in New Haven, Connecticut, when the opportunity to curate the tick collection arose.

Beati — whose name means “blessed”In Italian — jumped at the chance. After all, the collection is an active resource that researchers from all corners of the Earth make the trek to see.

“They compare their specimens to ours to decide whether or not they are dealing with already described species or new ones,” Beati explains.

Previously unknown ticks, then, are sometimes identified at the collection by way of these comparisons. Along with taxonomy, scientists and students work on gaining a better understanding of tick biology and tick-borne diseases.

Ticks cause “many, many diseases,” Beati says. “Lyme disease is probably the most popular in the US.” Ixodes scapularis, the deer tick, transmits Lyme.

“Probably the most dangerous disease transmitted by ticks is Crimean-Congo hemorrhagic fever,” she says, explaining that Hyalomma ticks found in desert areas of Africa and the Middle East transmit it.

Once one person is infected, a tick is no longer required for this illness to be passed from person to person. “You bleed, and it can be deadly,” Beati says, shaking her head sadly. “It’s a bad disease.”

There are different opinions about when ticks first appeared on the planet, with hypotheses ranging from 200 million to 400 million years ago, Beati says. Yet all scientists agree on one thing: Ticks have evolved to adapt to an enormous number of habitats on all continents.

For example, one family of ticks “can survive without feeding for decades,” she says. “They just go dormant, and their metabolism is very slowed down, but you open the box, you blow on the box, and they start moving around, and they are fine.”

Some of these ticks have been kept alive in the laboratory for over 12 years without any food: blood.

“If you think about ticks, they are parasites, but unlike a mosquito, a tick has to feed for a long time,” Beati said. “It’s not one second and it’s gone.” Instead, a tick has to fight the host’s immune system, and so it has developed a diverse array of molecules, she explains.

Scientists have begun work synthesizing similar molecules in their labs to use as human medicines, she says. Recent molecular work focuses on the genetic material found in ticks. In fact, tick DNA is a gold mine of information.

With the field of tick-related science moving very fast, “we will discover lots of new microorganisms,” she says. The newest molecular tools and techniques help scientists predict the possibility of disease. “New diseases transmitted by ticks — people call them emerging diseases — have been popping up on a regular basis,” she says.

Whether you’re a scientist or a citizen, safety remains key when you encounter — or are bitten by — a tick.

Depending on the species — and how well-fed they are — female ticks “can lay thousands of eggs. Two thousand. Three thousand,” Beati says. This is why people who wade into long grass and disturb a batch of larvae may find hundreds of ticks clinging to them.

“One of the important things we tell people when they want to remove ticks is, don’t break the tick,” Beati says. She explains that if you do so, any bacteria in the tick could end up on your skin. If you have an open wound, whether from the tick bite or not, the tick juice might infect you. “So always, when you remove ticks, make sure you disinfect well your hands and your fingers.”

For a tick to grab hold of you, you have to touch them, and then they will climb on you and decide whether you are an animal they like, Beati explains. If so, they will find a place on your body where they feel comfortable enough to feed.

This is usually a “darker place where they can hide,” Beati says. “So if you find a tick crawling on you, you have a bit of time before they actually start biting you.” Even after an infected tick bites, hours may pass — up to 24 after the initial bite — before you become susceptible to disease.

Beati herself is no stranger to their bite. It happens all the time, she says: “I actually love that. It helps me collect.” That said, not every tick she discovers in this way finds its way to a home in one of her specimen jars.

Disease may be frightening, but fear is not uppermost in Beati’s mind when she sees a tick.

“If you look at any tick under the microscope, you will find something beautiful about them,” this renowned scientist says. “They look like beautiful wood.”