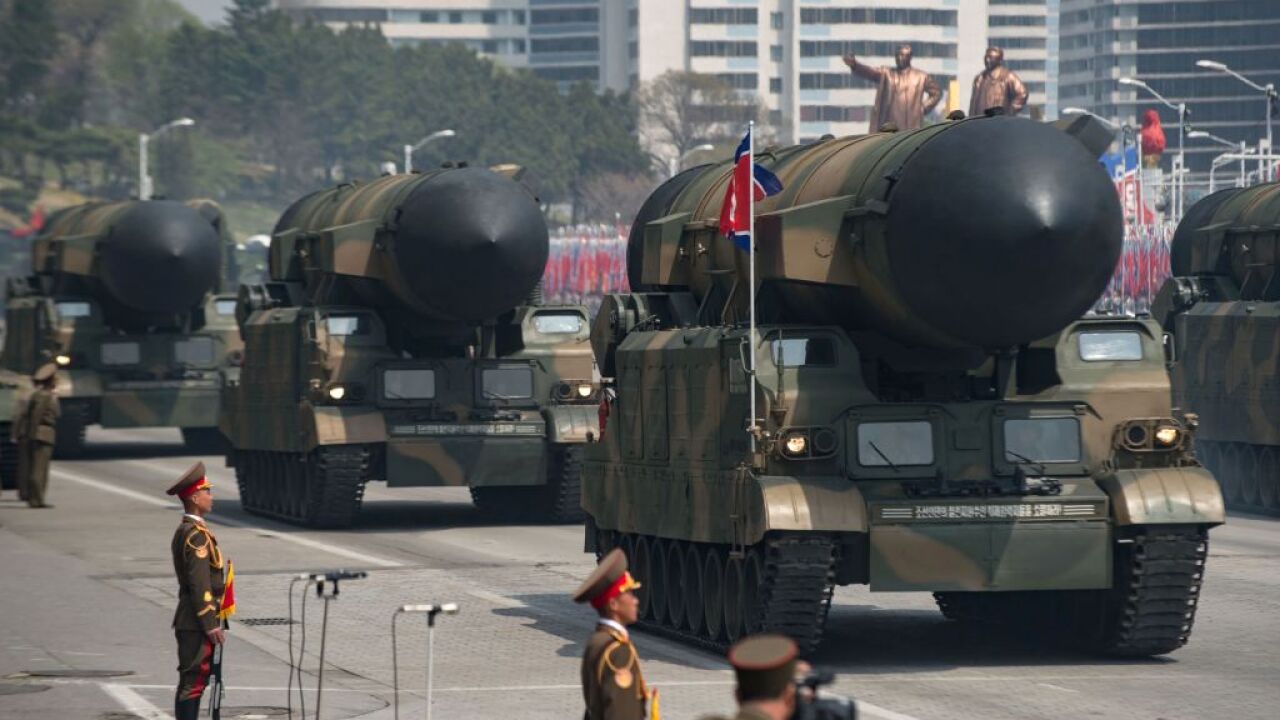 An unidentified rocket is displayed during a military parade marking the 105th anniversary of the birth of late North Korean leader Kim Il-Sung in Pyongyang on April 15, 2017. North Korean leader Kim Jong-Un on April 15 saluted as ranks of goose-stepping soldiers followed by tanks and other military hardware paraded in Pyongyang for a show of strength with tensions mounting over his nuclear ambitions. / AFP PHOTO / Ed JONES (Photo credit should read ED JONES/AFP/Getty Images)

(CNN) — North Korea’s latest ballistic missile test has renewed discussion at the highest levels of the Trump administration about how military force could be used to stop Kim Jong Un’s development of nuclear warheads and ballistic missiles.

“For those who have said, and been commenting about a lack of an military option, there is a military option,” national security adviser H.R. McMaster told reporters Friday, adding: “Now, it is not what we would prefer to do.”

At the same press briefing, UN Ambassador Nikki Haley acknowledged that if sanctions and diplomatic pressure don’t work, the UN may not be able to do much more.

“So, having said that, I have no problem with kicking it to (Defense Secretary) Gen. James Mattis because I think he has plenty of options,” she said.

Speaking Friday at Joint Base Andrews, the Air Force installation outside Washington, President Donald Trump emphasized the robustness of US military options. “After seeing your capabilities and commitment here today, I am more confident than ever that our options in addressing this threat are both effective and overwhelming,” he said.

For years, much of the work on options has centered around key initiatives, such as missile defense systems like the ground based Terminal High Altitude Area Defense (THAAD) system and long-range interceptors, as well as Aegis radar-equipped ships to shoot down incoming North Korean missiles.

Once the Trump administration came into office, there was a renewed look at so-called rapid-response options, such as “shows of force” that involve flying bombers over the Korean Peninsula to convince Kim the US means business.

But with no sign Kim is responding to diplomatic or sanctions pressure — or the threat of force — one of the key questions for military planners and intelligence analysts is what military option would actually work as a deterrent to Kim.

One senior US official says the problem right now in relying on a deterrence theory is “no one knows” what would actually deter the North Korean leader. The accepted theory in the military and intelligence community is Kim’s top priority is his own preservation and that of his family. That goal, the US believes, would keep him from attacking the US outright.

Mattis acknowledged earlier this month that Trump has been updated on all military options, saying: “Any threat to the United States or its territories, including Guam, or our allies will be met with a massive military response — a response both effective and overwhelming.”

But what has emerged are two problems: first, knowing exactly where Kim has hidden his weapons so the US can use determine exact target locations for precision weapons to hit; and second, getting past hefty North Korean defenses to get to those weapons.

The target set is massive.

The former chairman of the House intelligence committee, Mike Rogers, told CNN’s Jake Tapper there is in fact a so-called “decapitation option.”

Rogers says it means the US would “strike the leadership, including Kim and some of the senior leaders around him — take them out of the equation.”

There are also options for a ‘limited strike” on nuclear and other weapons sites.

And despite media reports several top US officials tell CNN there is no immediate consideration to putting tactical nuclear weapons into the region for use against North Korea. If the crisis reached the point of needing nuclear weapons, the US routinely keep submarines with nuclear tipped missile on covert patrols offshore, US officials privately acknowledge.

Numerous interviews with current and former administration officials reveal a list of options that could all result in massive civilians casualties even if US targeters knew where Kim has hidden all his weapons.

To get into North Korean airspace to attack any known missile or nuclear sites that can be located, the US would rely on cruise missiles and fighter jets to begin by attacking air defense missile and radar sites, officials say.

US officials are now looking again at any possible means for destroying thousands of artillery tubes and weapons Kim has arrayed just north of the demilitarized zone.

“There are literally thousands of tubes of artillery along the demilitarized zone that are aimed south, some of them directly at Seoul,” says Col. Steve Warren, a former Pentagon spokesman. “And, frankly, some of these artillery pieces are very simple, it’s simply an old-fashioned cannon that cannot be jammed, it cannot be interdicted any way other than with a direct strike.”

Internal Pentagon estimates calculate it could take a complex air bombing and cruise missile campaign a week or more to destroy whatever weapons can be found from satellite surveillance, although US officials believe they know where much of his weapons inventory is located.

The US would likely rely on the F-35 fighter jet, the most advanced in the inventory, and bombers to try to strike along the demilitarized zone, officials say. Trump touted the aircraft while speaking at Andrews.

“Now, when our enemies hear the F-35 engines, when they’re roaring overhead, their souls will tremble, and they will know the day of reckoning has arrived,” he said.

Current military planning also relies heavily on South Korean cooperation officials tell CNN. If there are ground combat operations, every effort would be made not to have US troops to go into North Korea due to Chinese sensitivities about any US presence in the event of conflict. South Korean leaders have long said they are strongly opposed to war on the peninsula.

Beyond diplomacy and all-out war, there is another possible option.

“There could be a cyberattack that the North Koreans don’t even understand … was a cyberattack from us,” said Warren. “They simply find themselves confounded by a problem that they didn’t anticipate. And this is just another tool. Sometimes when you attack, you want your enemy to know that you punched them in the nose, other times you want them simply to fall down and wonder why they fell.”