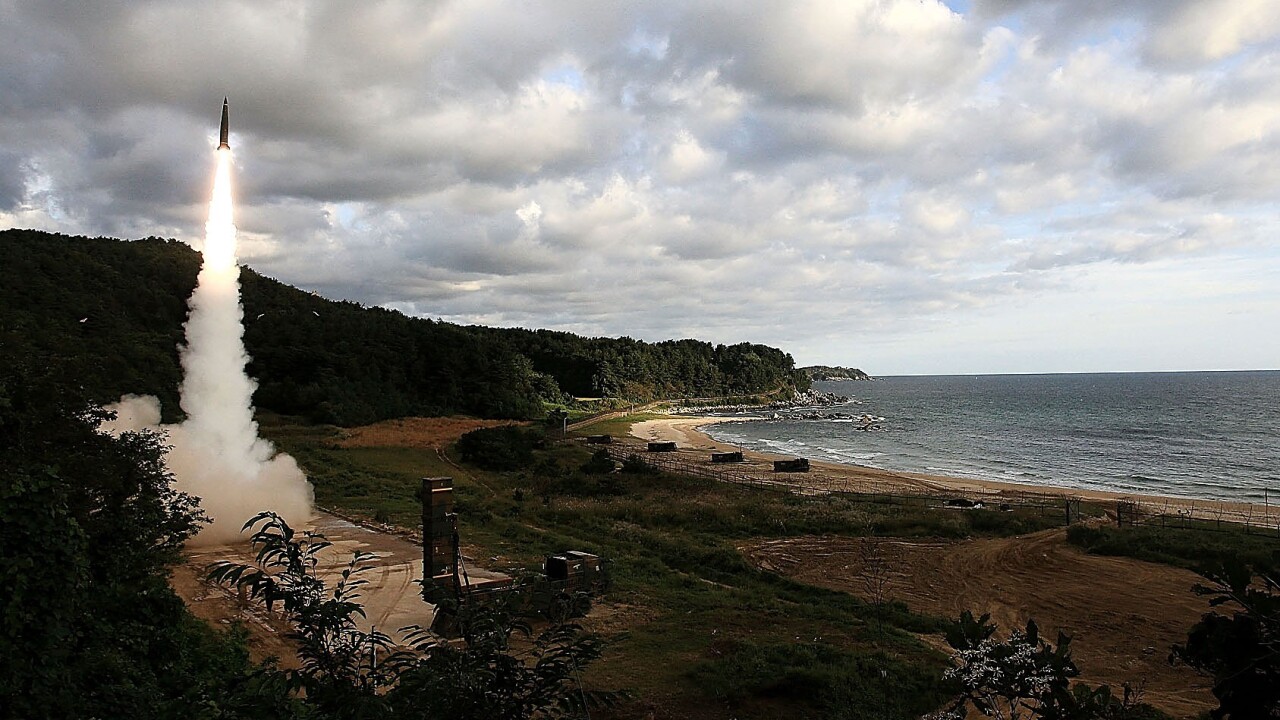 In a major show of defiance to the international community, North Korea fired a ballistic missile over the northern Japanese island of Hokkaido Friday.

The launch is the second to fly over Japan in less than a month, and the first since North Korea’s sixth nuclear test and new United Nations sanctions on the country.

North Korean state media has yet to reference the launch, but a commentary published in the Rodong Sinmun newspaper Friday said “no matter how strong the pressure is, it doesn’t work on us.”

Tokyo and Washington will be seeking to up that pressure at the United Nations Friday, with the two governments calling a snap meeting of the Security Council for Friday afternoon, ahead of the General Assembly next week.

Speaking after the launch, the first since North Korea’s sixth nuclear test, Japanese Prime Minister Shinzo Abe said the launch was “totally unacceptable” and went against “the international community’s strong, united will for a peaceful solution.”

Friday’s missile test follows the release of a statement Wednesday, in which the North Korean state news agency KCNA threatened the “four islands of the (Japanese) archipelago should be sunken into the sea by the nuclear bomb of Juche,” referring to the ruling ideology of North Korea.

The launch also seemed to be intended to send a message to the US, flying a distance equivalent to that from North Korea to Guam, the US territory that has come under threat from Pyongyang in recent weeks.

North Korea’s latest missile was fired from the district of Sunan in the North Korean capital of Pyongyang, home to the country’s main airport, the South Korean military said.

Friday’s missile flew the furthest of any North Korean intermediate-range missiles, though previous launches have used lofted trajectories, where missiles fly much higher over a shorter distance. By comparison, an intercontinental ballistic missile launched in July flew 3,700 kilometers (2,300 miles) high and traveled a distance of 1,000 kilometers (621 miles).

In response to North Korea’s launch, South Korea carried out a “live fire drill” that included a missile launch which the South Korean Joint Chiefs of Staff said was capable of striking the Sunan airport launch site near Pyongyang used for today’s launch.

A second missile that was fired at the same time failed and “sank into the sea off the east coast,” an official said.

“North Korea’s firing of yet another ballistic missile is a clear violation of (UN Security Council) resolutions and a very serious and grave challenge to international peace and security,” the South Korean government said in a statement.

NATO Secretary General Jens Stoltenberg said the launch was “another reckless breach of UN resolutions” and a “major threat” to international peace and security “which demands a global response.”

“China has strictly and comprehensively implemented the resolutions of the UN Security Council,” Hua said, adding the country has “paid a great price and made sacrifices.”

Friday’s missile test set off sirens as a government warning, known as the J-Alert, went out to citizens across a broad swath of northern Japan.

“The government is advising people to stay away from anything that could be missile debris,” NHK reported.

In a statement, US Secretary of State Rex Tillerson said the missile test was the second time the people of Japan “have been directly threatened in recent weeks.”

“The international community needs to unite and send clear message after North Korea’s dangerous provocation,” Abe told reporters. “We must let North Korea understand there is no bright future for North Korea if it continues in this way.”

He said the Japanese government tracked the launch of the missile and “took all possible measures.”

The launch came just hours after North Korea responded to the United Nations Security Council’s unanimous approval of additional sanctions by threatening to “sink” Japan and reduce the US mainland into “ash and darkness.”

Those sanctions were prompted by North Korea’s sixth nuclear test that occurred on September 3, which Pyongyang said was a successful test of a hydrogen bomb.

That explosion created a magnitude-6.3 tremor, making it the most powerful weapon Pyongyang has ever tested.

The nuclear test prompted discussions inside South Korea about the the redeployment of US tactical nuclear weapons in the country, an idea that the majority of the country’s citizens approve of, according to recent polls.

But on Thursday, South Korean President Moon Jae-in dismissed the possibility, warning it could “lead to a nuclear arms race in northeast Asia.”

Both Abe and Tillerson called for an intensifying of pressure on North Korea, including the full implementation of the new UN sanctions.

“United Nations Security Council resolutions, including the most recent unanimous sanctions resolution, represent the floor, not the ceiling, of the actions we should take. We call on all nations to take new measures against the Kim regime.”

He singled out Chinese oil supplies and Russia’s use of North Korean migrant workers as two areas in which the two countries could take “direct action” against North Korea.

Speaking Friday, Chinese Foreign Ministry spokeswoman Hua said it was “irresponsible and unhelpful to blame others,” adding those parties directly involved in the dispute “should shoulder the responsibility” for it.

2017 has been a year of rapid progress for North Korea’s missile program.

Less than six years into his reign, Kim Jong Un has tested more missiles than his father and grandfather combined. And this year has been no exception.

Prior to its most recent launch, the country has fired 21 missiles during 14 tests since February, further perfecting its technology with each launch.

There’s also a political aspect to the tests, analysts say.

“This new missile test … is both a reaction to the stringent UN sanctions of Monday evening and a wake-up call about the limits of sanctions and military threats as a way to change North Korea’s behavior,” said George A Lopez, a former member of the UN Security Council panel of experts for sanctions on North Korea.

He said Trump should use his speech to the UN General Assembly next week to “demonstrate US leadership in loyalty to all allies in the region and state our commitment to developing new and vibrant security guarantees for all states, including (North Korea), that are not based on the threat or use of nuclear weapons.”

The White House has been pursuing a strategy of what it calls “peaceful pressure” in dealing with North Korea — trying to build a global coalition to squeeze North Korea’s revenue and isolate it diplomatically so it will eventually put its missiles on the negotiating table.

China has been key to that strategy, as Beijing accounts for nearly 90% of all of North Korea’s imports, according to recent data from the United Nations.

Hours before the launch, Trump touted his relationship with Chinese President Xi Jinping and their collaboration in addressing North Korea’s rapidly escalating missile and nuclear programs.

“We have a very good relationship with China and with the President of China. We are working on different things,” Trump said. “I can’t tell you, obviously, what I’m working on. But believe me, the people of this country will be very, very safe.”