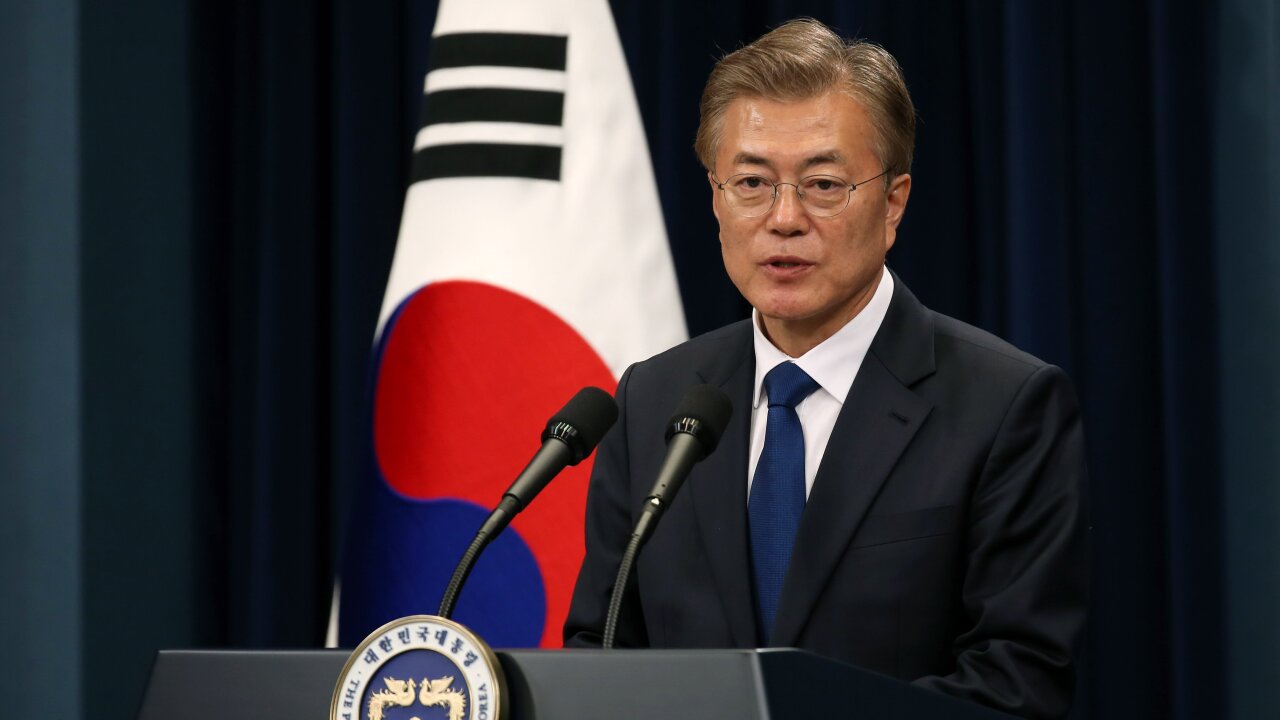 South Korean President Moon Jae-in has said US and South Korean policies are aligned on North Korea and promised there “will be no war on the Korean peninsula ever again.”

South Korean President Moon Jae-in has dismissed the possibility of deploying nuclear weapons in his country, warning it could “lead to a nuclear arms race in northeast Asia.”

Though he was not supportive of deploying or pursuing nuclear weapons, Moon said South Korea “needs to develop our military capabilities in the face of North Korea’s nuclear advancement.”

Earlier this month, South Korea’s defense minister suggested it was worth reviewing the redeployment of US tactical nuclear weapons on the peninsula in order to deter threats from the North, something conservative US Sen. John McCain said should be “seriously considered.”

A recent Gallup Korea poll found 60% of respondents were in favor of South Korea having its own nuclear weapons, with 35% opposed.

“To respond to North Korea by having our own nuclear weapons will not maintain peace on the Korean Peninsula and could lead to a nuclear arms race in northeast Asia,” Moon said.

Next week, Moon will travel to New York for the United Nations General Assembly. His visit comes amid speculation over a growing rift between Seoul and Washington, after US President Donald Trump accused Moon of seeking “appeasement” with North Korea.

“South Korea is finding, as I have told them, that their talk of appeasement with North Korea will not work, they only understand one thing!” Trump tweeted earlier this month.

Moon was undeterred Thursday, saying there was no need to interpret Trump’s tweet “in a narrow way.”

“I believe what President Trump wanted to say was that, not only South Korea and the US, but also China and Russia all together need to respond very firmly against North Korea’s nuclear provocations,” he said.

Moon said just because the US and South Korea were currently pursuing a firm path of sanctions and military drills, the time for negotiations wasn’t over.

“This is in order to make the right conditions for dialogues and I would like to emphasize this,” he said.

But he added the new harsh UN sanctions, agreed to on Monday, would need to be properly enforced if they were to have any effect.

“There’s not just formal trade. There’s also informal trade that is going on and if China and Russia faithfully implement this resolution, I believe we can also be able to ban this informal trade,” he said.

While Moon was voted into office in May largely on his economic and anti-corruption policies, his first months in power have been dominated by North Korea’s provocations.

Pyongyang has ramped up missile testing this year, and earlier this month it conducted its sixth nuclear test, believed to be the most powerful yet, and has also claimed it has the capability to mount a hydrogen bomb on top of an intercontinental ballistic missile (ICBM) capable of reaching the mainland US.

“North Korea continues to make very wrong decisions, so I’m very frustrated and I’m saddened to see this,” Moon said. “It’s a very reckless choice made by North Korea that is not helpful to North Korea itself or inter-Korean relations and threatens world peace.”

In response to the recent test, South Korea has ramped up military drills and completed the roll-out of a controversial US missile defense system — the deployment of which was previously criticized by Moon.

This week, analysts at 38 North, a monitoring service, said satellite images of North Korea’s nuclear testing site showed the effects of the earthquake caused by the most recent test, as well as preparations for “future underground nuclear testing.”

Moon said he believed North Korea wanted to ensure “regime stability” and to be accepted as a nuclear power state, with a seat at the negotiating table with the US.