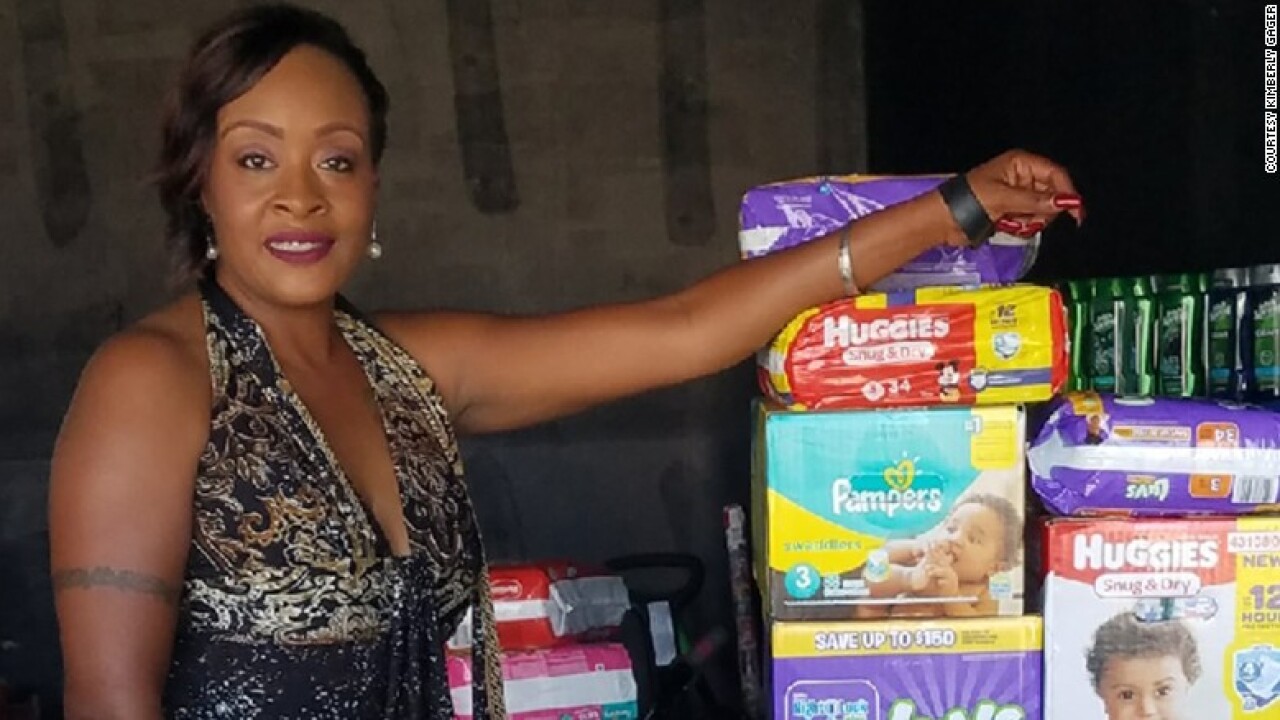 A Texas woman is putting her extreme couponing skills to work for victims of Hurricane Harvey.

Longtime coupon clipper Kimberly Gager has been buying diapers, baby food, toilet paper and other supplies and delivering them to storm evacuees who are taking refuge in the San Antonio area.

Her outreach efforts started two weeks ago, when she sent out a plea for help on Facebook.

“Many hurricane evacuees are asking for pampers, wipes and formula. I don’t have any of that stuff in my stockpile but I have tons of coupons for them,” Gager wrote in an August 29 Facebook post. “If you want to donate and assist me with getting these items, you can send the donation to my PayPal.”

What started out as a simple act of kindness has turned into a local phenomenon. Donations began flooding in and Gager has been making frequent trips to the store, chronicled on her Facebook page. Her photos show multiple shopping carts overflowing with boxes of diapers and her Facebook Lives show her clearing the stockpiles of baby food on the store’s shelves.

Gager’s garage is now doubling as a storage area for mass quantities of paper towels, laundry detergent and other personal supplies that she eventually loads up in vehicles to deliver to families in need.

Diapers, deodorant and body wash are the supplies Gager said have been most useful for families. But now that many are going back in Harvey’s aftermath to survey the damage, more are also in need of cleaning supplies, toilet paper and paper towels.

Gager is continuing to put out requests to her Facebook friends to help her get in touch with people who could use assistance. In public Facebook posts, she’s put out her cellphone number so evacuees can contact her — and she’s even offered her house up for people to come wash their clothes.

The struggles hurricane victims are facing are personal for Gager. In 1999, a hurricane damaged her own home.

“If you don’t know what it’s like to actually go through a hurricane and lose everything that you have, you’re blessed. I’ve been there,” she said in a video posted to her Facebook page.

Gager said families have been very grateful, sharing the story of three teenagers and their mother.

“They had all been using one razor, like sharing one razor,” Gager told HLN. “I mean, they were so grateful just to get a razor.”

With all the effort she’s been putting in, Gager admitted she gets a little tired.

“It is definitely a second job. I get very little sleep,” she said on HLN. “Once I finish my daytime job, I am hitting the store. Sometimes I even do this during lunch, before work, everything.”

But it doesn’t look like Gager’s efforts are slowing down any time soon.

After helping out Harvey victims, Gager is extending her kindness to Irma evacuees who might be in her area.

“This is a stretch but anybody know of Irma evacuees in the SAN ANTONIO area? Tell them to hit my inbox,” she wrote on Facebook.