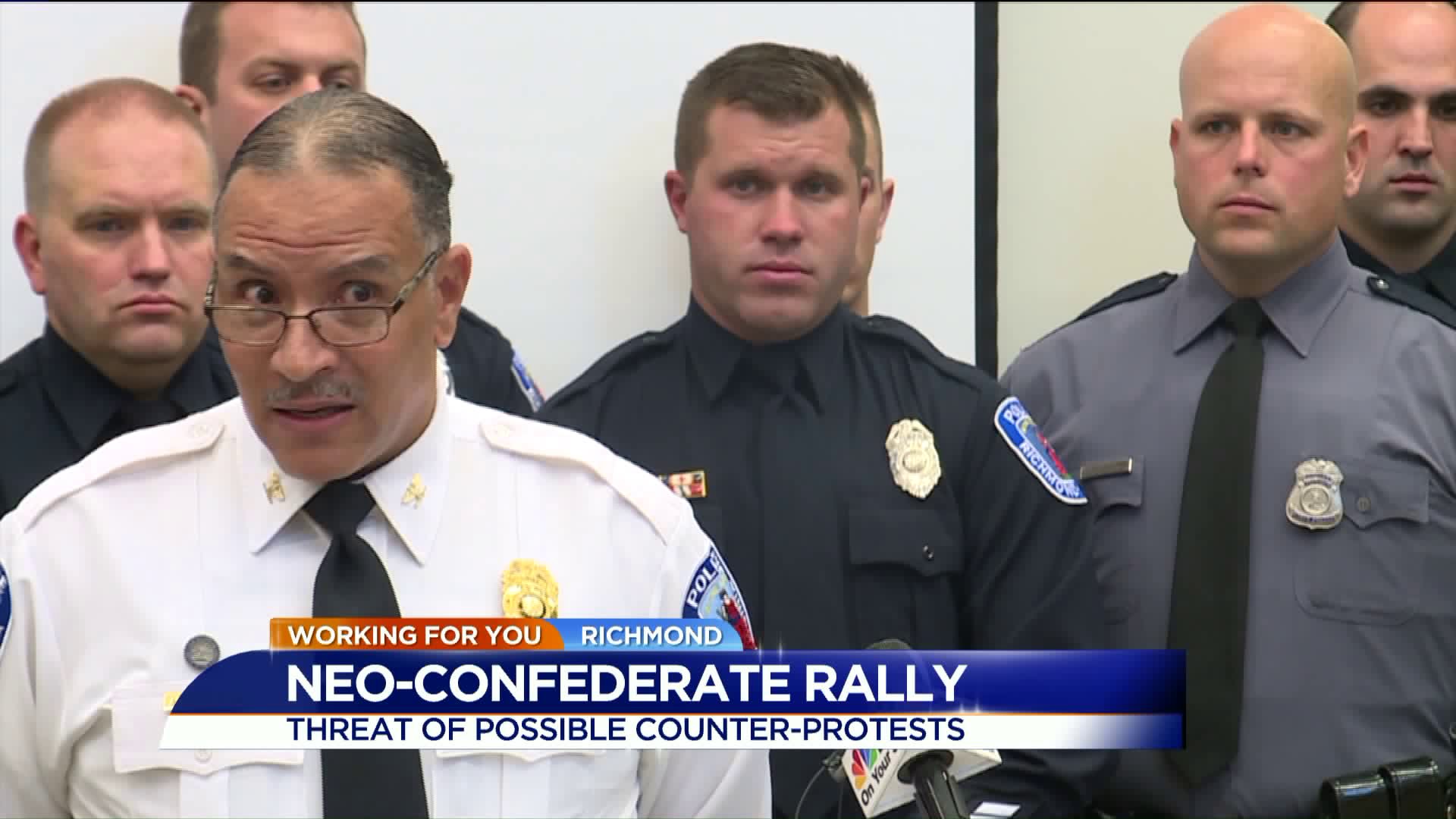 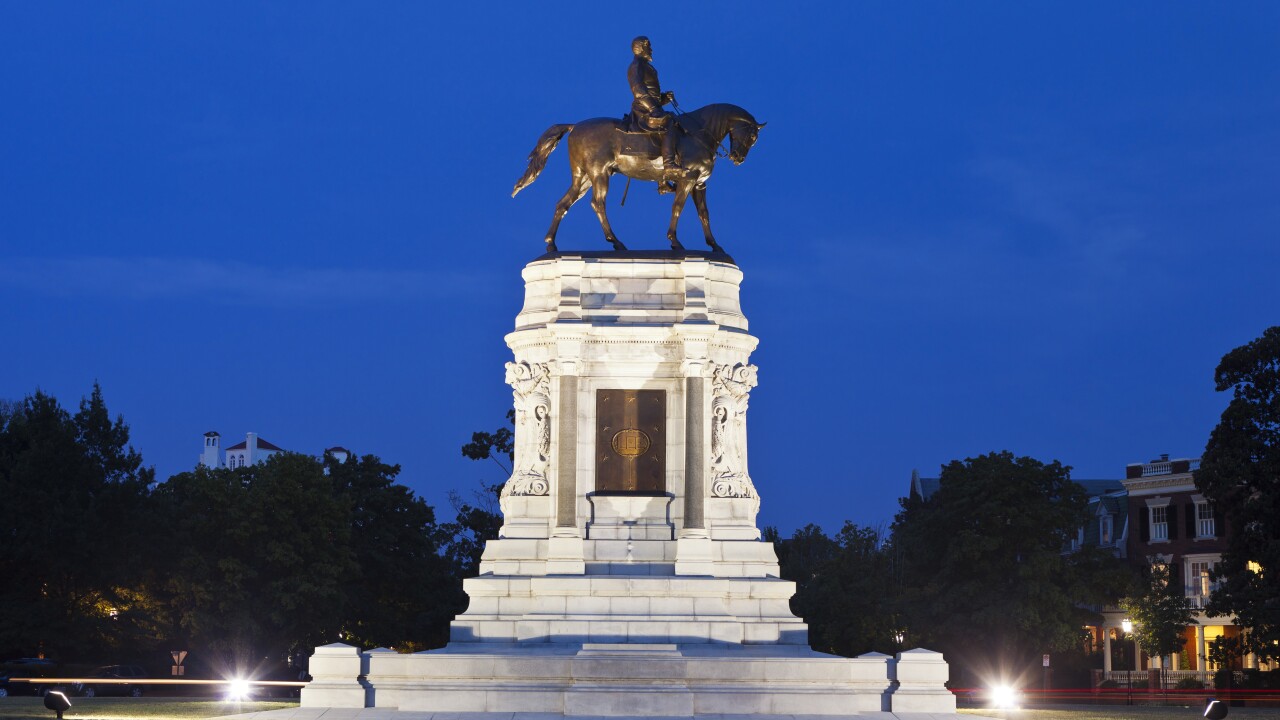 RICHMOND, Va. (WTVR) – CBS 6 reports that the Richmond Police Department is getting prepared for a possible Confederate rally on Sept. 16 in Richmond, expected to be met by a strong counter protest movement.

Chief Alfred Durham said that no group has applied for a permit and that they are preparing for numerous variables.

As CBS 6 first reported two weeks ago, the group CSA II: The New Confederate States of America, led by out-of-towners Tom and Judy Crompton and Tara Brandau, plan to host a “Heritage not Hate” rally at the Robert E. Lee Monument on Monument Avenue.

Crime Insider sources said police have intel that the group will attract opposition from ANTIFA, an activist group that has exploded in numbers since the inauguration of President Donald Trump. The group had a strong presence in Charlottesville when white supremacists and white nationalists gathered for a “Unite the Right” rally that saw deadly events unfold.

The chaos which rocked the Virginia town is on the forefront of many people’s minds.

And the week prior could see a flaring of tensions around the controversial issue of removing monuments, with Councilman Michael Jones expected on Sept. 11 to introduce a resolution to remove the monuments.

"It scares me to death,” said Richmonder Linda Bergh. “I don't want to have a war and what happened in Charlottesville looked like the beginning of a war to me. People don't realize it has already been fought--150 years ago."

Tom Crompton, with Confederate group, said that the Department of General Services denied his group a permit for 50 people, but they plan to rally regardless. Crompton said he has now focused his ire on Governor Terry McAuliffe, who issued an executive order barring demonstrations at the Lee Monument – this was after Crompton filed for the permit.

“We understand that the governor has taken away our First Amendment right for free speech and free assembly,” Crompton said.

Crompton, whose group is based in Tennessee, said he plans to pursue legal action.  “We will pursue any and all avenues to get the permit activated,” Crompton said.

He also emphasized their focus is “protecting our congressionally deemed monuments of our Confederate veterans.”

A local activist, who wished not to be identified out of concern for the safety of other activists and herself, said she “suspects if white nationalists show up in RVA permitted or unpermitted, there will be a community response.”

“We don’t associate with white supremacy,” Crompton said. “We do not believe in those groups or any other hate groups – nor will we stand for that.”

Brag Bowling, with the Coalition for Monument Preservation, canceled the event he previously had planned for Sept. 16 and said that after witnessing the violence in Charlottesville he did not want to see similar violent protests in Richmond. He said he did not want "outside elements" to descend upon Richmond.

"I'm totally opposed to those groups that were in Charlottesville and the causes that they wanted. I'm here for preserving Richmond's monuments, not to get in some racial fight with radicals."

When asked how they would attempt to distance themselves from any hate groups that attempted to unite through his rally, Crompton said they “don’t stand for bigotry or hate.”

“An organization that would attempt to rally with us that has any hate linked to them, they will be asked to leave or go to a separate area because we do not support their ideas,” he said.

Crompton said they are willing to face arrest “if need be because we can only protect our rights to Free Speech and our rights to peaceful assembly” but that “we are not about causing any disturbances.”

The RPD will continue to discuss their operational plans this week.

"I can’t predict the behavior of the community,” said Chief Durham, but he added that he can promise a lawful assembly.

He said that people living along Monument Avenue deserve peace of mind.

“Most recent history of these protests -it's folks from the outside and not locals,” Durham said. “Our citizens love this city and we don't want them thinking they can just come here, wreak havoc on our city and leave."

Next week police will meet with a Fan civic association to discuss their plan for what stands now as the unknown.