One person killed amid violence at alt-right rally in Charlottesville 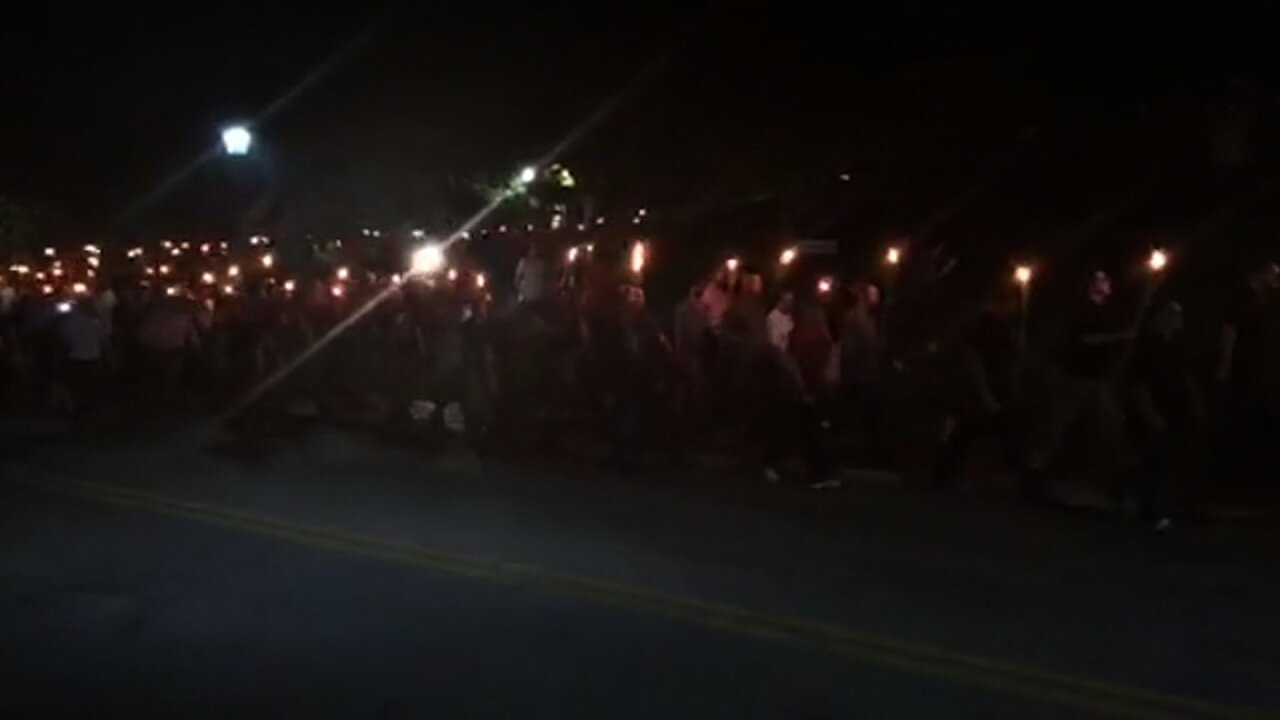 A group of alt-right activists marched through the University of Virginia campus in Charlottesville, chanting “blood and soil” and “one people, one nation, end immigration.”

One person was killed and 19 were hurt when a speeding car slammed into a throng of counterprotesters in Charlottesville, where a “Unite the Right” rally of white nationalist and other right-wing groups had been scheduled take place, the city tweeted on its verified account.

Fields is being held on suspicion of second-degree murder, malicious wounding and failure to stop in an accident that resulted in death.

The driver was later taken into custody, the city said in a news release. It did not name the person.

“I am heartbroken that a life has been lost here. I urge all people of good will — go home,” Mayor Mike Signer wrote on Twitter.

The city added that there were 15 other injuries associated with the scheduled rally.

Virginia’s governor had earlier declared an emergency, and police worked to disperse hundreds of protesters in the college town after clashes broke out ahead of the rally’s scheduled noon ET start.

Fistfights and screaming matches erupted Saturday, barely 12 hours after a scuffle Friday night at the nearby University of Virginia between torch-bearing demonstrators and counterprotesters.

Saturday’s rally was the latest event drawing white nationalists and right-wing activists from across the country to this Democratic-voting town — a development precipitated by the city’s decision to remove symbols of its Confederate past.

Here are the latest developments:

Video of the incident shows a gray Dodge Challenger driving quickly down a narrow side street lined with walking protesters. The sports car rams into the back of a silver convertible, which hits the van in front of it. Soon the Dodge driver slams the car in reverse, going back up the street at a high rate of speed, dragging its front bumper. Several people chase the car. As the sports car retreats, a red and white athletic shoe falls off the bumper.

Another video shows at least one person being thrown over the rear of the car onto the roof of the silver convertible then sliding down onto the hood.

• The declaration was made after fistfights and screaming matches erupted in several locations late Saturday morning.

• An unspecified number of protesters have been arrested in Charlottesville, state police said.

Police in riot gear stood shoulder to shoulder behind shields early Saturday afternoon, at times advancing toward crowds, CNN video shows. Members of the Virginia National Guard also were there.

By 1 p.m. ET, police had cleared the park where the rally was to be held. It wasn’t immediately clear how many demonstrators remained in other parts of the city.

“It is now clear that public safety cannot be safeguarded without additional powers, and that the mostly out-of-state protesters have come to Virginia to endanger our citizens and property,” McAuliffe said. “I am disgusted by the hatred, bigotry and violence these protesters have brought to our state over the past 24 hours.”

It wasn’t immediately clear what led to the fights, though tensions and rhetoric were running hot. At one point, a few dozen white men wearing helmets and holding makeshift shields chanted, “Blood and soil!” Later, another group chanted slogans such as, “Nazi scum off our streets!”

People punched and kicked each other during various scuffles, which often were broken up from within crowds, without police intervention, CNN video shows.

Earlier, a group of clergy and other counterdemonstrators, including activist and Harvard professor Cornel West, held hands, prayed and sang, “This Little Light of Mine.”

Police presence was heavy, with more than 1,000 officers expected to be deployed, city officials said. Police anticipated the rally would attract as many as 2,000 to 6,000 people, and the Southern Poverty Law Center said it could be the “largest hate-gathering of its kind in decades in the United States.”

Charlottesville, once home to Thomas Jefferson, is known as a progressive city of about 47,000 people. During last year’s presidential election, 80% of its voters chose Hillary Clinton.

But far-right activists and Ku Klux Klan members have come here in recent months, outraged by the city’s intention to remove traces of its links to the Confederacy — including plans to remove a statue of Confederate Gen. Robert E. Lee.

The effort developed amid a push by communities across the South to remove Confederate iconography from public property since the 2015 rampage killings of nine black churchgoers in Charleston, South Carolina, by a self-described white supremacist.

Ahead of Saturday’s planned rally, tensions roiled Friday night as white nationalists — some holding what appeared to be backyard tiki-style torches — marched onto the University of Virginia’s campus.

Chanting, “Blood and soil” and “You will not replace us,” the group rallied around a statue of Thomas Jefferson before they clashed with counterprotesters, CNN affiliate WWBT reported. The group left the university’s grounds when police arrived and declared the gathering an unlawful assembly.

“In my 47 years of association with @UVA, this was the most nauseating thing I’ve ever seen. We need an exorcism on the Lawn,” Larry Sabato, director of the university’s Center for Politics, tweeted.

Signer, the Charlottesville mayor, released a statement referring to Friday’s rally as a “cowardly parade of hatred, bigotry, racism, and intolerance march down the lawns of the architect of our Bill of Rights.”

“Everyone has a right under the First Amendment to express their opinion peaceably, so here’s mine: not only as the Mayor of Charlottesville, but as a UVA faculty member and alumnus, I am beyond disgusted by this unsanctioned and despicable display of visual intimidation on a college campus,” he added.

City officials had tried to “modify” the rally’s permit to move the demonstration from the park with the Lee statue more than a mile away to McIntire Park, citing safety concerns.

‘We’re going to start standing up for our history’

In February, the city council voted to remove the Lee statue, but that is on hold pending litigation. The council also voted to rename two city parks that had been named for Confederate generals; one of those, Emancipation Park, was due to be the site of Saturday’s rally.

Jason Kessler, who organized Saturday’s “Unite the Right” rally, said he doesn’t consider himself to be a white nationalist. But, he said, “we’re going to start standing up for our history.”

“The statue itself is symbolic of a lot of larger issues. The primary three issues are preserving history against this censorship and revisionism — this political correctness,” he told CNN Friday.