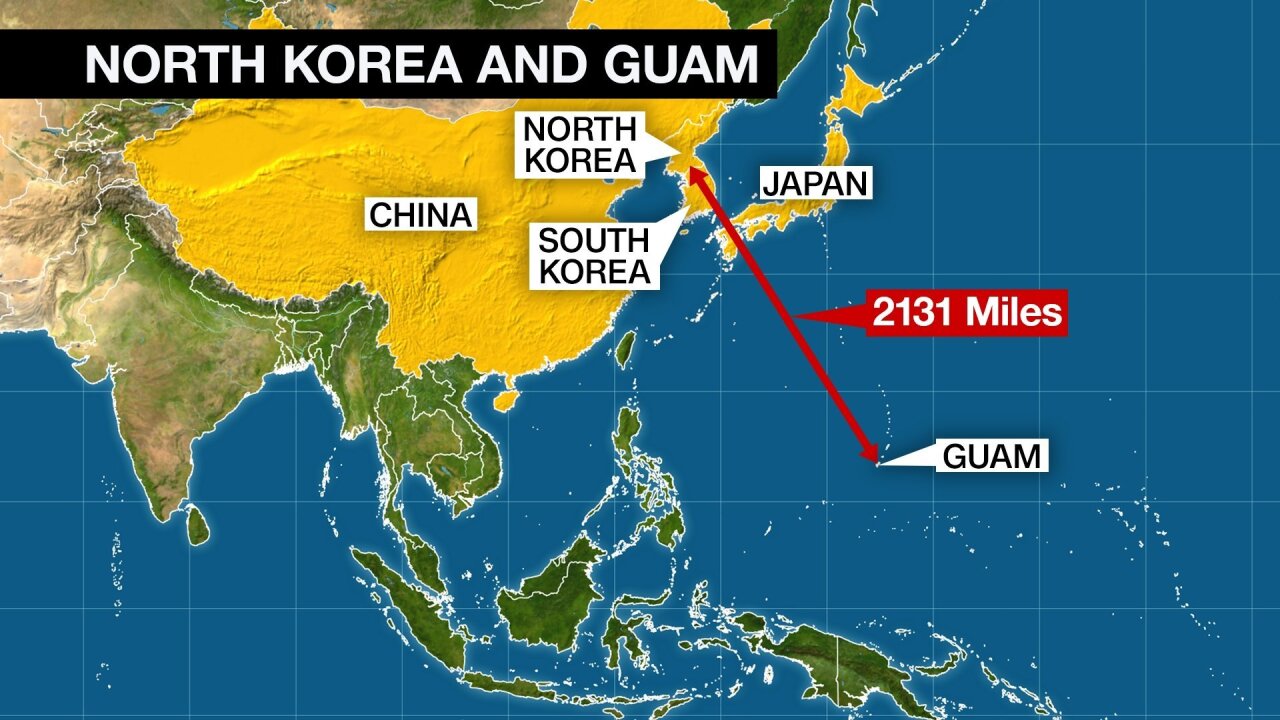 It’s the tiny island in the eye of a geopolitical storm.

North Korea has threatened to strike Guam, a US territory in the Pacific known for its white sand beaches, following the US President’s threat to unleash “fire and fury” against Pyongyang.

The country’s military leaders are finalizing a plan to present to Kim Jong Un in mid-August to fire four intermediate-range Hwasong-12 missiles over Japan to land less than 25 miles (40 kilometers) from Guam, state media reported Thursday.

For Pyongyang, Guam is seen as a prime target because it’s the closest US military presence on American soil to North Korea, and because military assets from here are sometimes deployed near the Korean Peninsula.

That proximity has long placed it in North Korea’s crosshairs, but the escalating war of words has put this territory of 160,000 civilians on edge.

“I’m not saying we shouldn’t be worried because we never know if they’ll decide to follow through this time,” said Tayana Pangelinan, a resident of Dededo, the island’s most populated village.

“But, considering Guam supposedly has a massive quantity of weapons, all I can do is pray and trust all will be OK.”

At the Guam Museum, amid an exhibit highlighting the the Japanese occupation of the island during World War II, Gov. Eddie Calvo told CNN that Kim has threatened his island since 2013. While the latest rhetoric causes concern, that’s as far as it goes, he said.

“There is no panic in Guam,” Calvo said. “I’m not trying to overlook it or understate it. We understand the threats, but we also don’t want to panic anybody, and we don’t want to jump to conclusions based on rhetoric.”

Arriving on the island Wednesday, life appears to be proceeding as normal.

Asian travelers, mainly Japanese and South Koreans, are still landing at the airport and it’s tough to find a room at one of the vacation resorts dotted around the island. Tourist arrivals in July hit a record for that month.

“Welcome to ground zero,” a US customs official joked on arrival, aware of the North Korean threat but laughing it off with a bit of gallows humor.

In addition to tourists, the island also hosts around 5,000 US troops at two US military bases. Dubbed the “tip of the spear,” Guam is a key to the US military’s forward deployed presence in the Pacific.

Its importance has declined since World War II, given the creation of military bases in Japan and South Korea, but analysts say it still plays a key role in the Pacific.

Many locals in Guam are confident in the protection afforded by the US military.

As part of its defenses on Guam, the US installed a Terminal High Altitude Area Defense system in 2013. The THAAD system is specifically designed to shoot down ballistic missiles. Also,the US routinely uses Aegis-equipped warships around the island chain of the Marianas, of which Guam is the largest.

“North Korea has a good fight on their hands if they’re going to try to mess with Guam,” said resident Andrea Salas.

However, Jeremiah Tenorio said even with the THAAD in place, he’s still concerned.

“There’s no real protection against a missile, in my opinion.”

Gov. Calvo said THAAD is the final layer of an “umbrella” of defense protecting the Pacific island. The US military has a presence on the Korean Peninsula, and in Japan and in its prefectures, such as Okinawa. There is also a a strong military presence in the Western Pacific, between North Korea and Guam, not to mention Guam’s own defense infrastructure, he said.

“There are layers that are floating in the Pacific in terms of missile defense,” he told CNN. “There’s even a THAAD system in South Korea now. So there are capabilities in different varying degrees between North Korea and Guam, and the THAAD system happens to be the last in a line or layer of a defensive shield.”

Calvo reassured the island’s residents that there was no change in the threat level resulting from North Korea.

He told CNN that while there was some fear, people were used to living with North Korean posturing.

However, he expressed some concern over the recent statements of some US politicians, singling out Republican US Senator Lindsey Graham.

Last week, Graham said “If there’s going to be a war to stop them, it will be over there. If thousands die, they’re going to die over there. They’re not going to die here and (President Donald Trump) told me that to my face.”

Calvo suggested that this was dangerous talk.

“If there was to be conflict in this region, understand that there is an archipelago, 600 miles long called the Marianas that encompasses two US territories — Guam and the Commonwealth of the Northern Marianas,” he said.

“You’re also talking over 200,000 American citizens, civilians, that will be caught in the crosshairs.”