What people get wrong about affirmative action 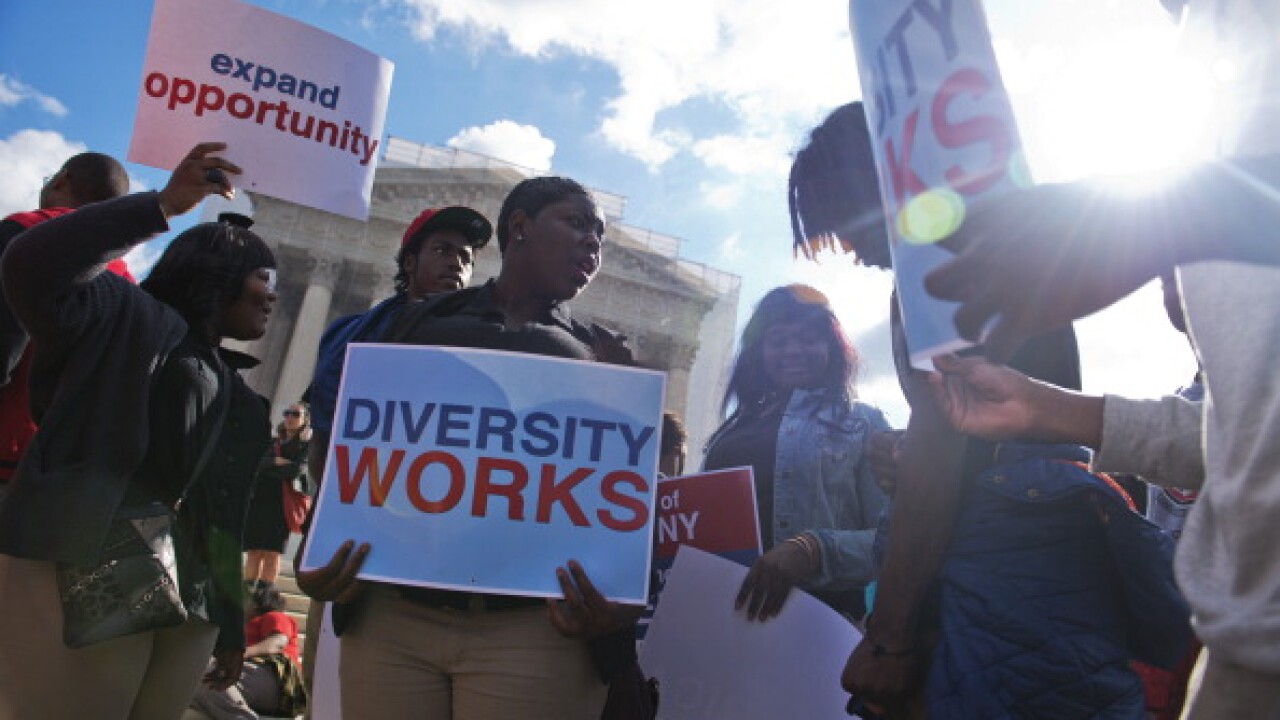 UNITED STATES – OCTOBER 10: Kenya Battle, 17, a junior at Dunbar High School in Northwest, stands outside of the Supreme Court as the justices heard oral arguments in Fisher v. University of Texas case, which could limit affirmative action practices that colleges and universities use in admissions departments. (Photo By Tom Williams/CQ Roll Call)

After the New York Times reported that the Justice Department is gearing up to combat “intentional race-based discrimination” in schools, many were left wondering whether we’re about to see a new push to dismantle affirmative action.

The Justice Department denied the Times’ report Wednesday, calling it “inaccurate” and saying that the document at the heart of the story was left over from the Obama administration.

Still, the story has reignited debate about affirmative action — a set of policies and laws intended to combat discrimination and promote diversity in schools and workplaces.

Here’s a primer on common myths about affirmative action, to help you separate fact from fiction as you’re following the debate.

It’s not about quotas

Schools with affirmative action policies don’t lay out a set number of students of a certain race that can be admitted — such an approach would be unconstitutional. The Supreme Court decided that in a landmark 2003 case, stating that quotas based on gender or race violated the Equal Protection clause of the 14th Amendment.

“People think there are a certain number of seats that get filled by minority groups, but that’s not the basis that gets legally upheld,” said Risa Lieberwitz of Cornell University. Lieberwitz is a Professor of Labor and Employment Law and also serves as General Counsel of the American Association of University Professors.

It’s not an automatic ‘in’

The constitution does permit colleges to use a holistic evaluation process for students that takes race into consideration as one factor. And schools can only implement that kind of policy once they’ve tried to increase diversity through “race-neutral” methods, like test score or GPA thresholds, Lieberwitz said.

“The (Supreme Court) has said universities have to prove that race-neutral alternatives have not met their goals of diversity,” Lieberwitz said. “Then it must assess what kind of programs it will adopt. How is race being used? Is it a positive factor? Is it one among many? If race is used too heavily, it may not be an acceptable program.”

In other words, no one gets in “just because they’re black/hispanic/a woman.”

Additionally, because schools adopt race-neutral methods, affirmative action programs may only end up benefiting a small portion of incoming students anyway. Texas has a famous (and controversial) race-neutral criterion called the “Top 10% Rule.” The law grants automatic admission to Texas state universities for the top 10% of students (with some exceptions) in every state high school class.

This means, at the more desirable schools, slots fill up quickly with students who were given an automatic OK. At The University of Texas in Austin, these “Top 10%” students have sometimes accounted for more than 75% of the incoming class.

It’s not required by federal law

A very common misconception that people have about affirmative action is that it is mandated from on high. When it comes to colleges and universities, it’s not. In fact, eight states have banned race-conscious admissions practices, and the Supreme Court has affirmed their right to do so as recently as 2014, when it upheld Michigan’s affirmative action ban.

It’s not just about race

Race and gender are the two main affirmative action factors that require strict scrutiny under the Equal Protection Act. However, they are far from the only types of “diversity” schools look at when making admissions decisions.

“There are lots of factors that we can think about that add to diversity — we would like have people coming from multiple regions of the United States, (or) who have had other careers,” Lieberwitz said. “There are many experiences that students have that are quite impressive and interesting, so universities are going to look at it all — that’s what holistic means, they are going to be looking at the entire package.”

It’s not the only practice that gives students an edge

It’s not uncommon to hear about students getting in to certain schools “because” their family member went there or they are related to a donor or influential person. While holistic admissions processes mean a student never really gets in “because” of one factor or another, it usually doesn’t hurt.

“In many university admissions programs, legacy applicants would be used as a positive in the admissions program,” Lieberwitz said. “And that is certainly their prerogative. That is not part of the Supreme Court’s determination of what is allowed and not allowed.”

However, whether it is because of race or gender, family history or donation history, Lieberwitz says it’s a fallacy to assume you will automatically be admitted anywhere.

“No one person is entitled to a seat or a place in the university, and universities should have that kind of discretion,” she said. “There will always be people who don’t get a seat.”