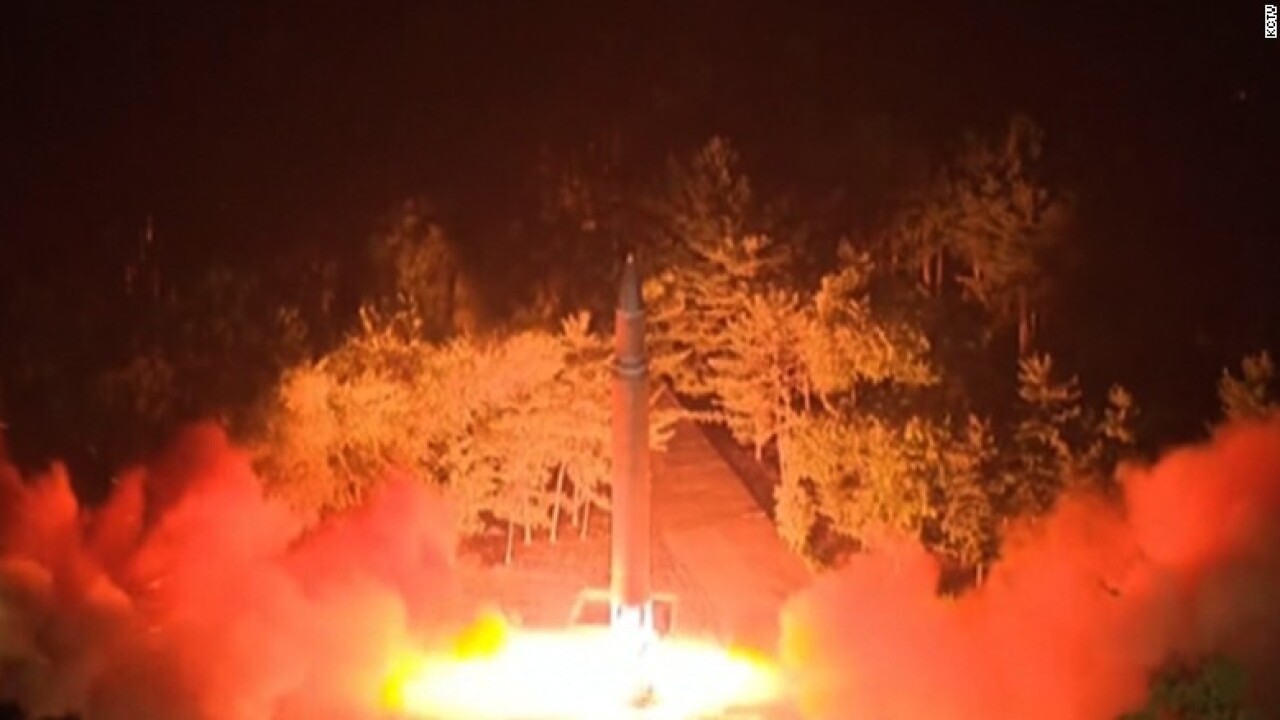 North Korea’s accelerated missile testing may pose a risk to passenger jets in the area, officials fear, as Pyongyang does not regularly give notice of its plans as required under international agreements.

On Friday, North Korea tested an intercontinental ballistic missile that it says is capable of hitting the continental United States.

But the missile may have posed a more immediate threat, flying within miles of the flight path that a passenger jet had just completed.

The missile came down 150 kilometers (93 miles) northwest of Okushiri Island at around 11:27 a.m. ET Friday, according to the Japanese military.

At that time, according data from FlightAware.com, Air France Flight 293 was 100 to 110 kilometers (62 to 68 miles) from the splashdown site, or around seven minutes of flight time at its then-speed of 914 kilometers per hour (568 mph).

Two airways — fixed routes established for navigation purposes — pass within 10 miles (16 kilometers) of where the missile is believed to have landed.

North Korea has been steadily expanding the range of its missile tests away from its east coast into Japanese waters.

In a statement Wednesday, Air France said that “North Korea’s missile test zones don’t interfere in any way” with the airline’s flight paths and that Flight 293 completed its flight “without any reported incident.”

Friday’s test wasn’t the first time North Korean missiles have been seen as a potential threat to aviation. After a July 4 test, US Defense Department spokesman Jeff Davis warned the “missile flew through busy airspace used by commercial airliners.”

Speaking to CNN on Wednesday, Davis said “responsible nations” should give notice before conducting missile tests, adding not doing so put planes, ships and spacecraft at risk.

“We did it for our THAAD test over the weekend. We did it with our ATACMS test, or ATACMS exercise that we did with the Republic of Korea Friday night …,” he said, referring to the Army’s Tactical Missile System.

“Irresponsible nations fire these things off without putting out notice.”

The chance of an unaimed missile striking a plane are “billions to one,” according to CNN aviation safety analyst David Soucie, but the ramifications are potentially huge and create a difficult decision for airlines operating in the area.

“Does it start a war? Is it an act of war? The impact of what could happen if that did occur are more than just a cost-benefit analysis,” Soucie said.

Under guidelines issued by the International Civil Aviation Organization, a UN agency tasked with governing air safety and other matters, states have the “responsibility to issue risk advisories regarding any threats to the safety of civilian aircraft operating in their airspace.”

“Said threats may include, but are not limited to, armed conflicts, ash clouds due to volcanic eruptions, (and) missile tests and rocket launches,” the guidelines state.

South Korea has warned since at least 2014 that North Korea fails to issue notices to airmen regularly when conducting missile launches. Such notices are issued to warn pilots and airlines of potential risks during their flights.

In March 2014, Seoul said a passenger jet passed through the trajectory of a North Korean rocket in a “very dangerous” fashion.

CNN reached out to North Korean officials for comment on the issue but hasn’t received a response.

Japan’s Ministry of Foreign Affairs said that it issued a warning to all vessels and aircraft operating within its exclusive economic zone eight minutes after the launch of the North Korean missile.

Failure to issue proper guidelines can result in tragedy. During the 2014 conflict in Ukraine, airlines were told to fly above 26,000 feet (7,900 meters), a level at which they were believed to safe from ground attack.

However, according to a comprehensive report into the downing of Malaysian Airlines Flight 17 by Dutch authorities, the Ukrainians may have failed to take into account the presence of weaponry posing a risk to civil aviation in the conflict zone.

The report concluded a missile — which had a far greater range than other weapons in the area — brought down the plane, killing almost 300 people on board.

Should a North Korean missile come close to a passenger jet, it’s “probably not something you would be able to detect like you detect another aircraft,” a Hong Kong-based commercial pilot told CNN.

“You wouldn’t even know it was coming,” he said, speaking anonymously as he was not authorized by his employer to discuss sensitive matters.

“The issue is North Korea is firing missiles out of (its) airspace jurisdiction. … It’s quite a big threat.”

A decision to adjust flight paths to compensate for any potential risk from North Korean activity would likely be a costly and difficult one, said Soucie, the CNN analyst.

“The bigger picture is the fact that no one really has the authority to mandate (a no-fly zone),” he said. “It’s up to each airline to make that decision.”

Such a decision by an airline would require a significant diversion from usual flight paths and airways, potentially racking up large fuel costs for long-haul flights such as those bound from Asia to Western Europe.

The Hong Kong pilot said it would likely force some flights to carry out “technical stops to land and refuel somewhere” to complete their routes.