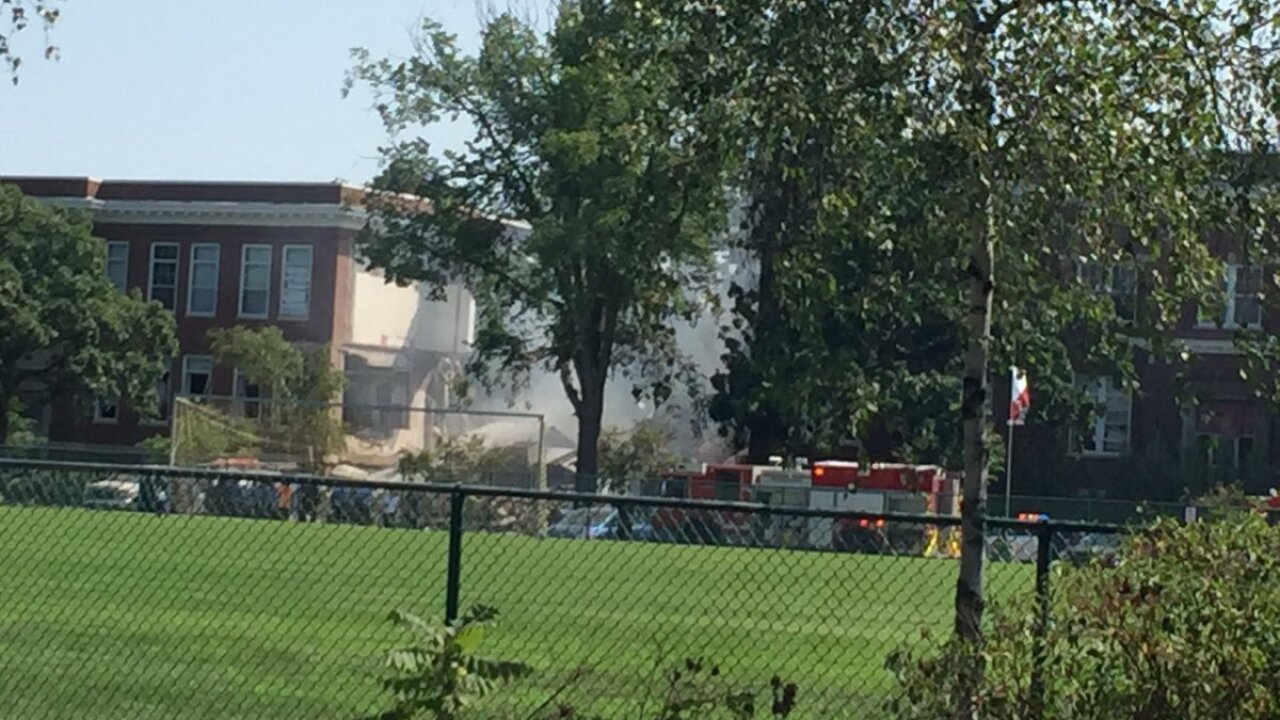 Fire crews were searching for possible victims and extinguishing a blaze after a building collapsed at Minnehaha Academy in Minneapolis on August 2, 2017, officials said.

A natural gas explosion at Minnehaha Academy in Minneapolis on Wednesday collapsed part of the building, killing one person and hospitalizing nine others, officials said.

One person is still missing, and fire crews are assessing the safety of the rubble pile to attempt a rescue, Minneapolis Fire chief John Fruetel said. The rescue mission is expected to continue throughout the night, Fruetel said.

Police said the victim and the missing person are both staff members from Minnehaha Academy, but have not identified them further. Fruetel said all the construction workers are accounted for.

Minnehaha Academy said all its summer-program students and staff were accounted for and safe. An individual who was earlier believed to be missing was later found outside the area, officials said.

Of the nine people taken to the hospital, three were in critical condition and four were in serious condition, said Dr. James Miner of Hennepin County Medical Center. All are adults. The patients had fractures and head injuries, but no burns, he told reporters.

Two floors in the center section of the building collapsed over a sub-basement, Fruetel said, and there was heavy damage all through the school. The structural integrity of the building is still in question.

Becca Virden, a spokeswoman for CenterPoint Energy, said crews were called to the area of a school boiler room to assist first responders and make the area safe.

The Christian school said there was a gas leak and explosion at its multistory Upper School, which houses grades 9-12. The academy has about 825 students in grades Pre-K through 12, housed on two campuses. The 2017-18 school year is set to begin August 23.

“I would imagine it would have been a lot more significant if it was (during) school time,” Tyner said. “It is a good thing that it’s the summertime and probably limited the amount of people that were in the building.”

First responders said it looked like a “great big hole” in the building where the collapse occurred, with flames shooting from one side of the building. Officer Dean Milner said two civilians on scene helped rescue one man who was buried beneath the rubble.

Milner said officers were battling through thick flames and the smell of gasoline to rescue the unidentified adult male. Officers also warned people nearby to get away in case of a second explosion.

Officer Vicki Karnik, one of the first responding officers on the scene, said the explosion reminded her of the 2007 Minneapolis bridge collapse that killed 13 people and injured 145.

“I was kind of having a flashback, especially with it being 10 years ago [yesterday],” she said.

Jack Mahler was warming up for a soccer practice nearby when he heard two sprinting men yelling “Gas!” and “Get out!” Shortly after, there was a huge explosion that knocked him off his feet, he told WCCO, “and then it was just kinda chaos from there.”

Three people on the roof of the school needed assistance getting down, officials said.

John Barron, who lives across the street from the academy, told the station the blast shook his windows and startled his dogs.

“I saw that where the building used to be one continuous building, (it) now had a gap,” he said. “I could see sunlight all the way through to the other side.”

Gov. Mark Dayton pledged resources for first responders. “I thank the many firefighters, paramedics, and law enforcement officers who rushed to the scene this morning, and who are working still to ensure the safety of our children, adults, friends, and neighbors,” he said in a statement.

This story has been updated to reflect the latest information from officials.