Charlie Gard will be moved to hospice for final hours: Judge 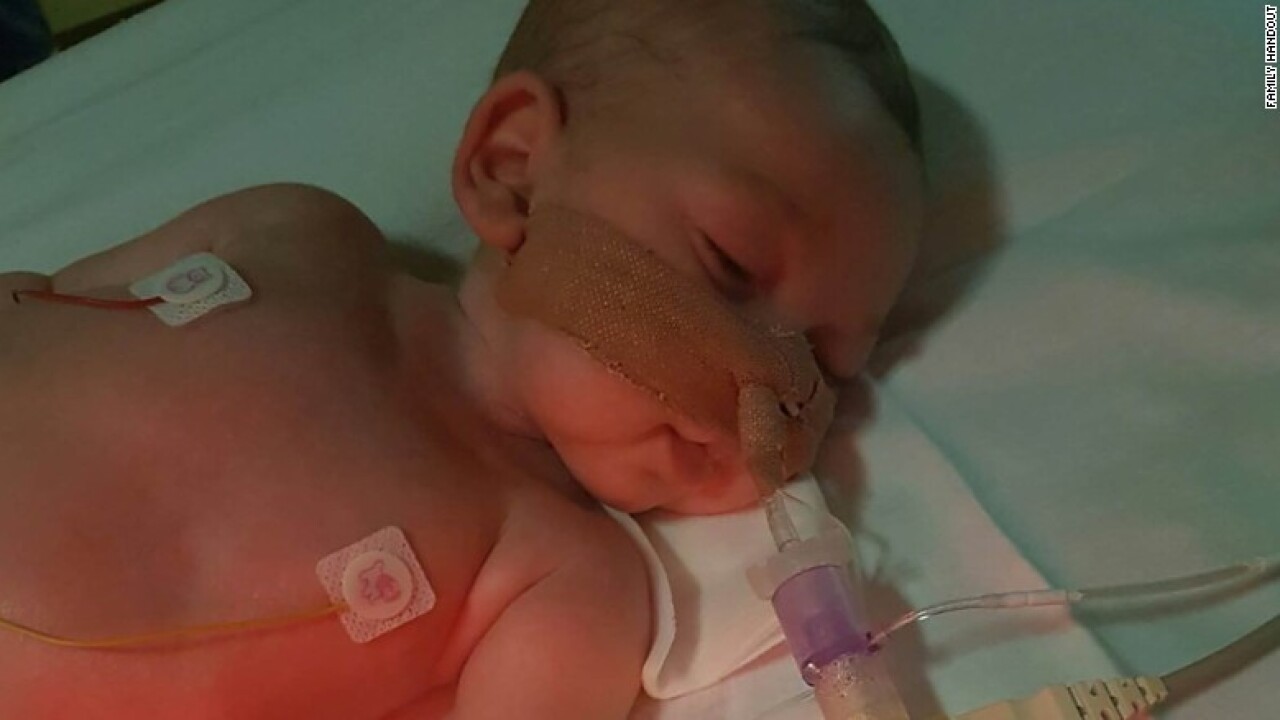 Charlie Gard, the terminally ill baby at the center of a bitter legal battle that has garnered global attention, is to have his life support treatment withdrawn.

A UK High Court judge has ruled that Charlie should be moved from Great Ormond Street Hospital (GOSH) to a hospice, where he will “inevitably” die within a short period.

“We deeply regret that profound and heartfelt differences between Charlie’s doctors and his parents have had to be played out in court over such a protracted period,” a GOSH spokesperson said in a statement.

“It has been a uniquely painful and distressing process for all concerned,” the spokesperson said, adding: “Every single one of us wishes there could have been a less tragic outcome.”

The timing of the move and the location of the hospice are private, according to Judge Nicholas Francis’s court order.

Charlie suffers from mitochondrial DNA depletion syndrome, a rare degenerative condition which has left him with irreversible brain damage and a loss of motor skills.

Charlie’s parents, Chris Gard and Connie Yates clashed with doctors at Great Ormond Street Hospital, where Charlie has been cared for for months, over whether or not to stop treating him.

In its statement, issued Thursday after Judge Francis’s order came into effect, the hospital praised the pair for tirelessly advocating on behalf of their son, adding: “nobody could fault them for doing so.”

The GOSH statement said its staff had “tried absolutely everything to accommodate their final wishes,” including “exploring the unprecedented step of delivering intensive life support away from a hospital intensive care unit.”

“We will arrange for Charlie to be transferred to a specialist children’s hospice, whose remarkable and compassionate staff will support his family at this impossible time,” it added.

“This is a very special place who will do all they can to make these last moments as comfortable and peaceful as possible for Charlie and his loved-ones.”

On Monday, Gard’s parents ended a long-running fight to take their son to the US for experimental treatment after doctors ruled it would not help him.

But they remained in dispute with the hospital over when and where the 11-month-old should die.

The couple had hoped to bring their son home for his final days, but gave up on that wish earlier this week. After having a change of heart over the hospice, his family then asked the court for permission to continue artificial ventilation for a period of some days at the end-of-life facility.

But his doctors opposed this, arguing that hospices focus on supportive care in the final stages of illness, and are not usually set up to accommodate keeping an infant in Charlie’s condition alive.

GOSH said it had “moved heaven and earth” to fulfill the parents’ wishes, but said that no intensive care pediatric doctor in the country was able or willing to supervise his care at home. And despite being given more time, the family were also unable to find a suitable pediatrician to help them.

The court order revealed that Gard and Yates continued to pursue avenues for bringing their son home, even after the final court hearing in the case on Thursday.