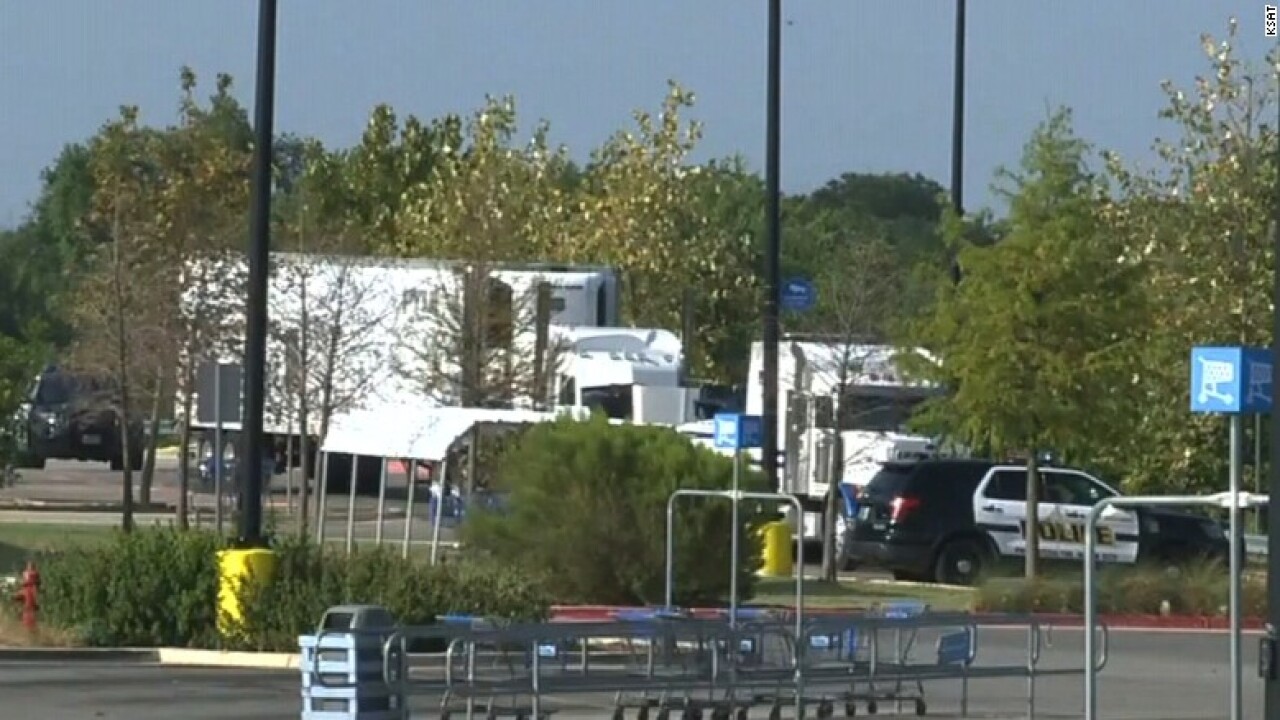 Crowded inside of the boiling tractor-trailer, they took turns taking breaths from a hole in the semi. Some fainted. Others banged on the wall to get the driver’s attention but he kept going, one man who survived the journey told federal authorities.

The assistant public federal defender who is representing Bradley couldn’t be reached for comment.

The tractor-trailer was found parked at a Walmart in San Antonio early Sunday morning after an employee at the store called police. Authorities found dozens of undocumented immigrants inside.

Eight people in the truck were already dead, and two more died after being hospitalized. Dozens more were severely injured, and many will suffer from “irreversible brain damage,” the city’s fire chief said.

A federal complaint shed light on the ordeal. One man from Mexico, who crossed the border through Laredo, Texas, said he and his brother traveled for a day before they climbed into the tractor-trailer; another man said he spent nearly 11 days at a Laredo “stash house” with about two dozen others before their journey on the semi.

Federal authorities are classifying the incident as a human smuggling case.

“This most recent example is an example of human smuggling where individuals were brought into the United States in violation of immigration law,” Jack Staton, acting assistant director for intelligence for Homeland Security Investigations at ICE, told reporters on Monday.

Driver said he was surprised by ‘Spanish’ people

When police came to investigate the semi, an officer found “multiple people standing and laying at and around the rear of the trailer,” according to a criminal complaint against Bradley.

That’s when they started talking to the driver.

“Bradley advised the officer that the trailer he was hauling had been sold and he was transporting the trailer from Schaller, Iowa, to Brownsville, Texas,” on the border with Mexico, the federal criminal complaint says. Bradley said he was delivering the truck to its new owner in Brownsville at his boss’ request, but that he was not given a time frame nor a delivery address, the complaint said.

Pat Sullivan, a spokesman for Blue Beacon Truck Wash, told CNN the tractor-trailer was washed at the company’s facility on Beltway Parkway in Laredo at 11:58 a.m. on Saturday. Sullivan said drivers typically pull up, pay inside the facility and then workers wash the truck, which takes about 20 minutes.

Sullivan said the employees who washed the truck did not report hearing any noises from inside the trailer or notice anything strange about the truck. The company is investigating and cooperating with authorities, Sullivan said.

“Bradley stated he was unaware of the contents and/or cargo,” the complaint said, until he parked the tractor-trailer at the Walmart and went outside to urinate. That’s when he heard movements in the trailer, the driver told investigators.

“Bradley said he went to open the doors and was surprised when he was run over by ‘Spanish’ people and knocked to the ground,” the complaint states.

But the driver didn’t call 911, authorities said. Instead, he went back to the tractor and called his wife.

Bradley was in handcuffs as he limped into a federal court on Monday, surrounded by several US marshals. The driver spoke briefly with his assistant public federal defender before the arraignment. Bradley’s detention and request for bail will be addressed at a preliminary hearing on Thursday.

Homeland Security Investigations agents interviewed several of the undocumented immigrants who had been hospitalized.

One said he left the central Mexican city of Aguascalientes and waited with about 28 other people in Nuevo Laredo to be smuggled across the river into the United States, bound for San Antonio.

He told investigators he paid about 12,500 pesos ($707) for protection and a raft ride across a deep portion of the Rio Grande. After crossing at night, “they walked until the next day,” the court document states.

At 9 a.m the next day, his group was picked up in a silver Chevrolet Silverado truck and taken to the trailer, which already had about 70 people inside, the criminal complaint says.

“He was told to get inside and he would be transported later that evening. The smugglers closed the door and the interior of the trailer was pitch black and it was already hot inside.”

With no food or water, the migrants tried to make noise and get the driver’s attention, “but nobody ever came.”

Twelve hours later, they were moved to another trailer, the man said. Some people had trouble breathing and passed out.

When the trailer eventually braked hard and stopped, some people fell over because they were so weak, the man said. After the door opened, six black SUVs were waiting to pick up the people, but those SUVs quickly filled up and took off.

The man said once he arrived in San Antonio, he was supposed to pay his smugglers $5,500. But instead he was taken to a hospital, severely injured from the journey.

“These people were helpless in the hands of their transporters,” said Richard L. Durbin Jr., US attorney for the Western District of Texas. “All were victims of ruthless human smugglers indifferent to the well-being of their fragile cargo.”

Authorities have not released the nationalities of the people crammed inside the tractor-trailer. But the Mexican government issued a statement offering its condolences to the families of the victims.

Four Mexican nationals died after the journey, the Mexican Foreign Ministry said in a statement. Twenty-five of the immigrants are also Mexican nationals, officials said, of which 21 remain hospitalized.

Guatemala Foreign Minister Carlos Morales confirmed to CNN that Frank Guisseppe Fuentes González, 20, of Guatemala City, was among the dead. Fuentes González was supposed to meet with his family in the United States, officials said.

The tip-off to authorities started when a man from the trailer asked a Walmart employee for water, the police chief said. The employee was concerned and called police for a welfare check.

“With heat strokes or heat injuries, a lot of them are going to have some irreversible brain damage,” he said.

A heatstroke can cause swelling of the brain and other vital organs, possibly causing permanent damage, if a person’s body temperature isn’t quickly lowered, according to the Mayo Clinic.

Officials said the air conditioner in the trailer was not working. And the high temperature in San Antonio on Saturday was 100 degrees Fahrenheit (38 degrees Celsius).

“Unfortunately, some of them were severely overheated, and that was a refrigerated truck with no refrigeration,” Hood said. “So we were very fortunate that they were found.”

Two of the people hospitalized are 15 years old, the fire department said.

In a state where human smuggling happens with alarming frequency, Sunday’s discovery stirred memories of a 2003 case in Victoria, Texas, that left 19 people dead. At the time, a border and transportation security official called it “the greatest loss of life in recent history in what appears to be an alien smuggling case.”

The victims, ranging from a 7-year-old boy to a 91-year-old man, died of asphyxiation, dehydration or heat. They had been crowded in the back of a truck with about 100 other people, with temperatures soaring past 100 degrees Fahrenheit, investigators said.

The driver in that case, Tyrone Mapletoft Williams of Schenectady, New York, was initially sentenced to life in prison, but in 2011 was resentenced to almost 34 years in prison.

Thomas Homan, the current acting director for Immigration and Customs Enforcement, was a lead investigator in the Victoria case.

Last month, he disputed the notion that his policies were heartless and said the humane thing to do is to deter people from paying the human smugglers and cartels that are the only way to illegally cross the Southwest border.

“Why am I so strong in what I’m trying to do? Because people haven’t seen what Tom Homan’s seen,” Homan said.

“They haven’t seen the dead immigrants on a trail that were left stranded. … People weren’t standing with me in Victoria, Texas, in the back of a tractor-trailer with 19 dead aliens including a 5-year-old child laying dead under his father that suffocated.”

‘Human smuggling is a horrendous crime’

Because deaths are involved in the case, Bradley faces up to life in prison or the death penalty if he is convicted of the federal alien smuggling charge.

“Human smuggling is a horrendous crime, and unfortunately, it does not get a lot of media attention, until you have a tragic situation like this happen,” Staton said.

Staton pointed to several other instances of human smuggling over the past 30 years: In 1987, 18 people died in a boxcar in Sierra Blanca, Texas, and 11 people died in a grain hopper in Denison, Iowa, in 2002.

“Time and time again, I’ve seen houses where people are being pretty much held against their will. People abused, people left in the desert to die,” Staton said.

Human smuggling across the southwest border is like a “travel agency type of event,” and fees are paid to smugglers at points in the journey, Staton said. There is an overlap with transnational drug sales, but he said human smuggling cases typically are not run by cartels.

It’s too soon to say if the immigrants found alive inside the sweltering truck will be deported, or if they could be eligible for visas protecting them as crime victims if they testify or cooperate with investigators.

Staton said he couldn’t discuss details of the pending San Antonio case. But he said some survivors could be called as witnesses.

Asked what’s happened to victims in past smuggling cases, Staton said each case is different.