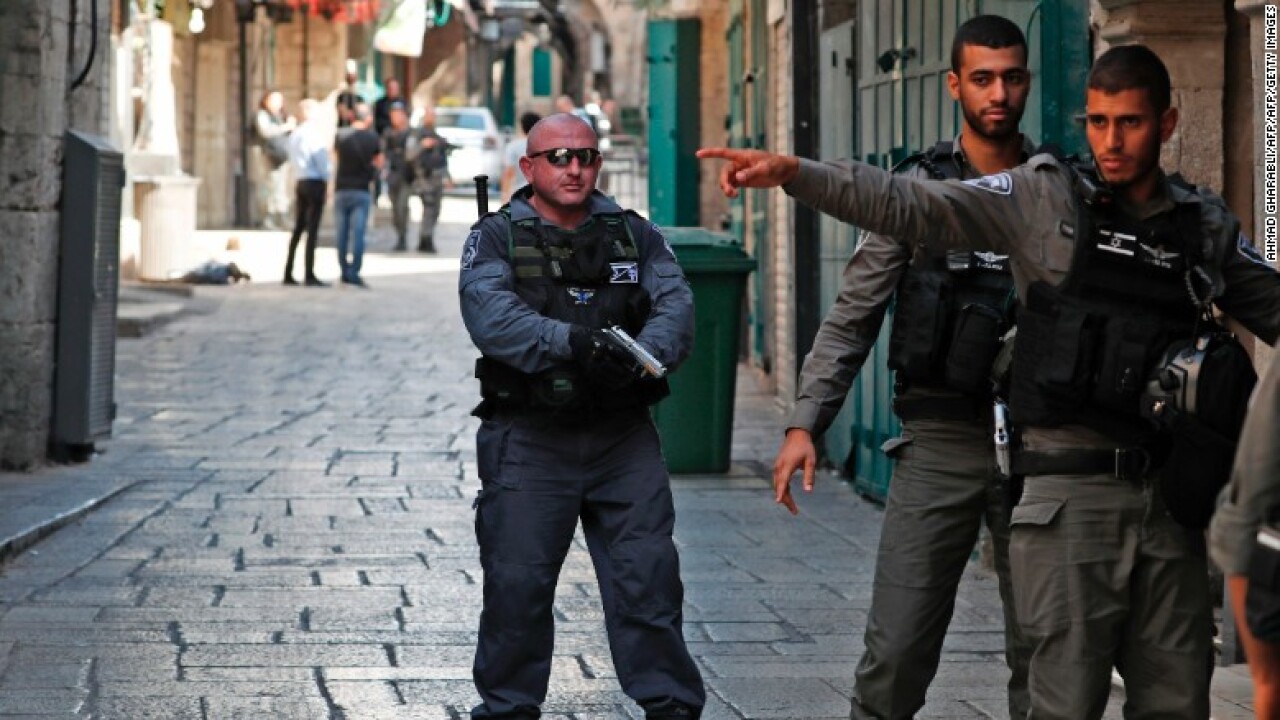 Two Israeli police officers were killed in a shooting Friday in Jerusalem’s Old City, just outside one of the world’s most important religious sites.

Israeli police spokesman Micky Rosenfeld said three armed assailants, whom he identified as terrorists, targeted police units in the area. One tried to stab a police officer, he said.

All three attackers were shot and killed, and the area was closed off, according to Rosenfeld. The injured were taken to nearby hospitals. 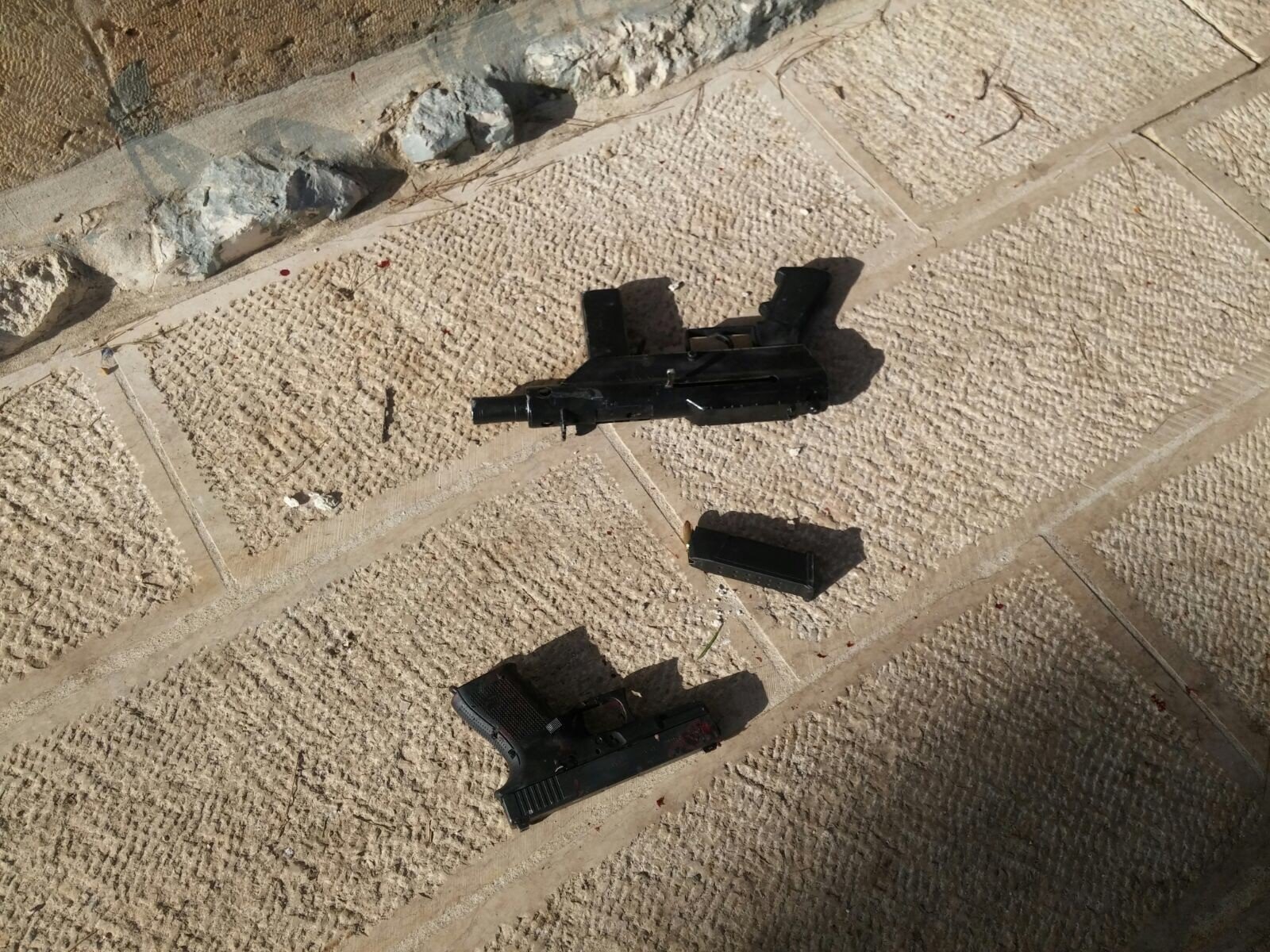 “I can confirm that the two police officers who were previously in critical condition have died of their wounds in hospital,” Rosenfeld said.

In a statement on his official Facebook page, Israeli Prime Minister Benjamin Netanyahu paid tribute to the slain police officers, naming them as Haiel Sitawe, 30, father to a 3-week old son, and Kamil Shnaan, 22. Netanyahu said the officers were members of Israel’s Druze community, an Arabic-speaking religious minority.

“Our Druze brothers,” he said in a statement, paid “the heaviest price in our common endeavor to protect the security of the State. I salute them and their valor. We hold their memory dear in our hearts.”

The attackers were Israeli Arabs from Umm al-Fahm in northern Israel, Rosenfeld said.

Police released images of what they said were the assailants’ weapons, including a knife, a pistol and a homemade automatic firearm.

The attack took place a little after 7 a.m. local time by the Lions’ Gate in the Old City walls, next to what Muslims call the Noble Sanctuary and Jews the Temple Mount.

The area is home to the Western Wall — which was part of the walls around the Second Jewish Temple and is one of the holiest places for Jews to pray — and the Dome of the Rock, where Muslims believe the Prophet Mohammed ascended to heaven.

Video obtained by CNN showed part of the lethal confrontation in the plaza area of the Noble Sanctuary or Temple Mount.

The area was closed Friday for security assessments, Rosenfeld said.

On Saturday, Netanyahu’s spokesperson for Arab Media said the site would reopen on Sunday for worshipers, visitors and tourists.

Netanyahu said he had agreed to increased security measures there.

“This evening I held a discussion with the top security leadership and I instructed that metal detectors be placed at the entrance gates to the Temple Mount,” he said Saturday.

“We will also install security cameras on poles outside the Temple Mount but which give almost complete control over what goes on there. I decided that as of tomorrow, in the framework of our policy of maintaining the status-quo, we will gradually open the Temple Mount, but with increased security measures.”

He said he had spoken to the parents of the slain police officers and ordered that the mourners’ tents of the attackers’ families be destroyed.

Netanyahu’s comments were released by the Prime Minister’s adviser as he was preparing to leave Israel for Paris, where he will meet with French President Emmanuel Macron.

The Al-Aqsa Mosque compound is within the closed area so Muslims were unable to hold Friday prayers there.

Jerusalem’s grand mufti, Mohammad Hussein, was arrested shortly after Friday prayers, which were held on a street outside the Old City.

Hussein wanted to enter Al-Aqsa Mosque, but police refused to allow him access, according to the Waqf, the authority that administers the Noble Sanctuary, also known as the Temple Mount.

An argument ensued, and Hussein was detained but later released.

The mufti, who is in charge of the institute, is the top authority on Muslim law in Jerusalem and among Muslim Palestinians.

In a phone call with Netanyahu, Palestinian Authority President Mahmoud Abbas “expressed his strong rejection and condemnation of the incident” and “any violent incidents from any side especially in places of worship,” Palestinian state-run news agency WAFA reported.

Abbas also demanded the cancellation of Israeli measures closing Al-Aqsa Mosque to worshippers, according to WAFA. He warned of the “repercussions of these measures or its exploitation by any side to change the religious and historical status of the holy places.”

Netanyahu told Abbas there would be no change in the status quo of the holy sites and called for calm from all sides, the news agency said. Abbas’ office confirmed to CNN that the phone conversation took place.

Netanyahu’s office said in a statement that Abbas had condemned the attack in the call and that the Israeli Prime Minister had said all necessary measures would be taken to ensure security on the Temple Mount “without changes to the status quo.”

UN Secretary-General Antonio Guterres deplored the shooting and welcomed Abbas’ condemnation of the attack and Netanyahu’s assurance that “the status quo at the holy sites in Jerusalem will be respected.”

Fridays in Jerusalem are often a time of heightened security as it’s the holy day of the week for Muslims and Shabbat for Jews begins at sundown.

Though shootings are rare, stabbings and vehicle attacks in Jerusalem have been common in recent years.

A 23-year-old policewoman died last month after she was stabbed near the city’s Damascus Gate. Three assailants were shot and killed, police said.

In January, a man plowed his truck into a crowd of soldiers, killing four and injuring 10. The militant Islamist group Hamas, which runs Gaza, praised the attack but did not claim responsibility.