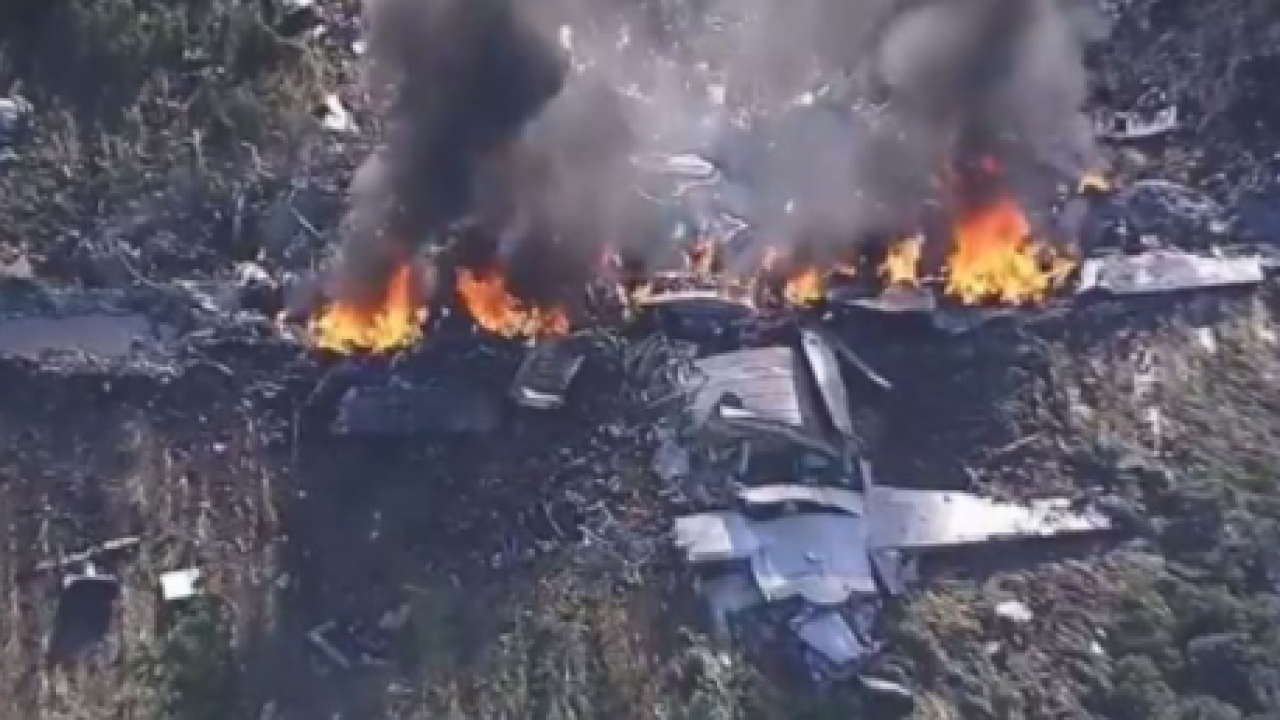 It’s not clear how far apart the sites are, but one lies about a half-mile north of US 82 and the other a half-mile south of the highway.

“Indications are something went wrong at cruise altitude,” the general said.

Andy Jones, a witness to Monday’s crash, said a trail of white smoke followed the plane as it spiraled toward a soybean field. It dropped below the tree line with a bang.

“At first it looked like an acrobatic plane, like a stunt plane, blowing the smoke out the back,” Jones said. “Then all of a sudden you realized that the smoke was coming off one of the sides of the wing.”

The military is in the recovery phase of the operation, James said. Next, it will work to preserve the impact sites before beginning an investigation, he said. The FBI, the Bureau of Alcohol, Tobacco, Firearms and Explosives and other state and local agencies are assisting in the operation, he said.

Because the plane was carrying weapons and small-arms ammunition, an ordnance disposal team is also working in the area. Anyone removing items from the scene or near it could be criminally prosecuted, state Department of Public Safety Commissioner Marshall Fisher said.

“If the public hears an explosion — a small explosion, in that regard — there should be no need for alarm,” Fisher said.

The crash left a debris field with a radius of about 5 miles, authorities said. Jones told CNN that there were bodies on the opposite side of US 82 from the main crash site.

CNN aviation analyst Mary Schiavo said that given the two distinct impact points and that the debris is spread out over several miles, it leads her to believe the plane experienced a catastrophic event — perhaps an engine or propeller breaking off — that caused the plane to come apart midair.

“That means an in-flight breakup,” the former inspector general for the US Department of Transportation said. “That’s really rare.”

Jones called 911 after he heard the plane hit the ground, describing the final moments before the impact that killed a Navy hospital corpsman and all 15 Marines on board.

Six Marines and a sailor from an elite unit based at Camp Lejeune, North Carolina, were aboard the KC-130T when it went down, the Marine Corps said. The other nine Marines on board were from Orange County, New York, County Executive Steve Neuhaus said. Orange County is home to Stewart Air National Guard Base in Newburgh.

The flight departed from a Marine Corps Air Station in Cherry Point, North Carolina, and was transporting nine Marines and their equipment to Naval Air Facility El Centro, California.

The plane, which belonged to a Marine refueling and transport squadron, was then scheduled to take the Camp Lejeune-based troops, along with their equipment, to Marine Corps Air Station Yuma, Arizona, for “routine small unit pre-deployment training,” the Marine Corps said. The seven belonged to the 2nd Marine Raider Battalion.

‘He loved the Marine Corps’

The only confirmed victim is Gunnery Sgt. Brendan Johnson, a Vermont native who had been in the Marine Corps for 23 years.

“He loved the Marine Corps,” Brendan’s father, Kevin, told CNN. “He loved his job. He liked to fly.”

Johnson was a loadmaster on the KC-130, helping manage the cargo on board. In his time in the Marine Corps, Johnson traveled to Europe, Africa, South Asia and the Pacific as well as war zones in Iraq and Afghanistan without any incidents, Kevin Johnson said.

“The old name for it used to be Hercules,” Johnson said of the plane carrying his son. “The Hercules C-130s. That’s what’s surprising; they’re a very safe aircraft.”

Johnson has yet to receive any answers about the crash.

“They’re still calling it an accident. We still don’t know what caused it,” he said. “We’re probably not going to know for a long time.”

Families of the victims have been notified, and a list of victims should be released in coming days, James said.

The plane went down on a soybean farm in Leflore County, Mississippi, about 100 miles north of Jackson.

Mississippi Gov. Phil Bryant warned people not to take debris from the scene.

“If you find an item that you think is related to this tragedy, turn it over to authorities immediately,” he tweeted. “I thank first responders for their hard work. Please stay away from the site and let them do their job.”

Often used for airborne refueling, the KC-130, made by Lockheed Martin Corp., also can deliver cargo, troops and equipment.

The Marines’ commandant expressed his “deepest condolences to the families of those killed in the aircraft mishap yesterday afternoon in Mississippi.”

“Please keep the families of our 16 fallen service members in your thoughts and prayers,” Gen. Robert Neller said Tuesday.

Politicians also took to Twitter to offer their condolences.

US Sen. Thom Tillis, R-North Carolina, chairman of the Senate Armed Services Subcommittee on Personnel, sent a series of tweets responding to the crash.

In one, he said the crash was “a tragic reminder of the dangers our servicemembers face daily, including training missions needed to keep our nation safe at home & abroad.”