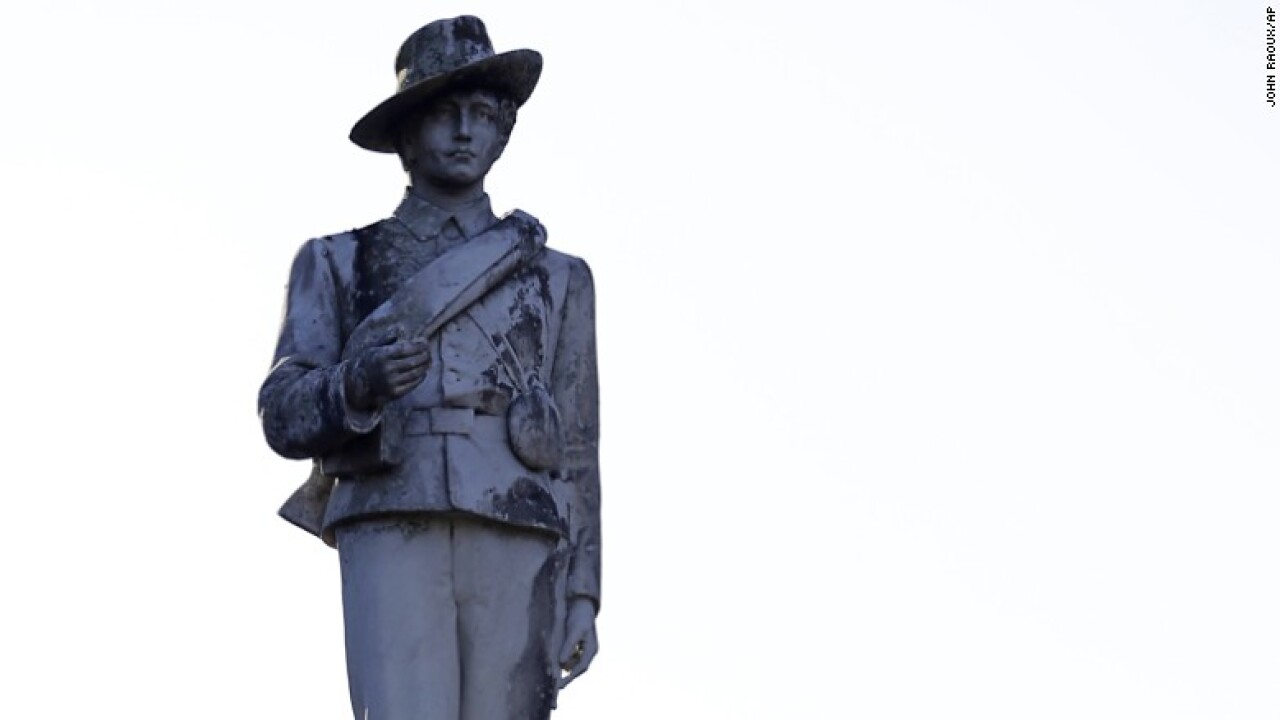 Chloe Coney remembers what it was like to be one of the first black students to attend Hillsborough High School in Tampa, Florida, in the 1960s.

The 66-year-old remembers classmates calling her insulting names including the n-word. She remembers fearing for her safety at a pep rally as students waved the Confederate Flag and sang “I Wish I Was in Dixie.”

She shared those memories with Hillsborough County commissioners Wednesday as she implored them to remove a statue of a Confederate soldier from in front of a Tampa courthouse.

“This little 16-year-old girl started crying because it was my ancestors who’d been beaten and raped in the land of cotton,” she said in a phone interview Wednesday recalling her comments. “This little girl needed healing from the tragic emotional trauma that was placed on us.”

Coney took to the podium Wednesday in the packed chambers looking for solace. Behind her, people in the gallery held signs that said “Americans build monuments; we don’t remove them.” She left disappointed when commissioners decided 4-3 to keep the monument.

Instead, after nearly three hours of contentious debate, they voted to add a mural behind the monument to showcase what one member called “the love and diversity” in the community.

“If we don’t look for a compromise or consensus, there’s going to be hatred and anger that could last for decades,” Commissioner Victor Crist said.

“What I’m going to argue is [the statue] is there and let’s make lemonade out of lemons. Let’s wrap it in love and let’s continue the message of what we have developed into today.”

It was a rare negotiated outcome in the national debate over the place of divisive Confederate memorials. The removal of four statues in New Orleans in May renewed discussion in communities across the South over what to do with theirs in what one attendee of Wednesday’s meeting called “a crazed obsession for radical leftists.”

While other cities in Florida are taking steps to remove the monuments from another era, the decision makes Tampa one of the first to decide to keep one, and then some.

The commissioners also passed proposals to fund an education program to address racism in the community and protect Hillsborough war monuments from future removal attempts.

The vote comes a day after Orlando moved a statute called “Johnny Reb” from a park downtown to historic Greenwood Cemetery. In May, the Alachua County Commission voted 4-1 to donate a statue known as “Old Joe” in downtown Gainesville to the United Daughters of the Confederacy, the group that dedicated the statute in 1904.

In light of those developments, Hillsborough Commissioner Lesley Miller, the panel’s lone black member, thought Tampa’s time had come, too. He proposed removing the statue in May, saying it was divisive to him as an Air Force veteran and descendant of slaves.

To him, Wednesday’s vote was a “slap in the face.”

“This monument was erected because of the mere fact that the South wanted to remember ancestors who fought to keep my ancestors in slavery,” he said. “They talk about those Confederate soldiers being veterans but you’ve got to realize they turned their backs on this country and they lost. It’s treason.”

Not everyone at Wednesday’s hearing saw it that way.

“Veterans are veterans. It doesn’t matter if they come from the Vietnam War [or] the Confederate Union,” county resident Donny McCurry said. “A veteran deserves respect.”

‘We must not erase history’

“Memoria In Aeterna” depicts two Civil War soldiers next to an obelisk. Like “Old Joe” it was the product of the United Daughters of the Confederacy, an outgrowth of two organizations that arose after the Civil War to pay homage to the Confederacy through the construction of monuments and memorials.

The white marble obelisk was dedicated in 1911 in a ceremony that drew thousands of people. It originally stood in front of the old courthouse and was moved in 1953 to its current location.

“The South stands ready to welcome all good citizens who seek to make their homes within her borders. But the South detests and despises all, it matters not from whence they came, who, in any manner, encourages social equality with an ignorant and inferior race.”

Such sentiments speak to the intent of the statute, and they have no place on courthouse grounds, Kemp said. She’d like to see it moved to a museum or cemetery like other communities have done, but would not have it destroyed.

“This monument only speaks to a certain side of history,” she said, adding that her ancestors fought for the Confederacy. “I think it’s respectful of history to move it somewhere else.”

Others see the removal of monuments as a threat to history.

“This monument and many others like it have nothing to do with hate or racism but everything to do with our history and heritage,” county resident Daniel Nelson told the commissioners.

Such threats made the additional proposal to protect war monuments from removal just as necessary, he said.

“Confederate history is American history and we must not erase our history,” he said in his closing remarks. “Thank you and God bless Dixie.”