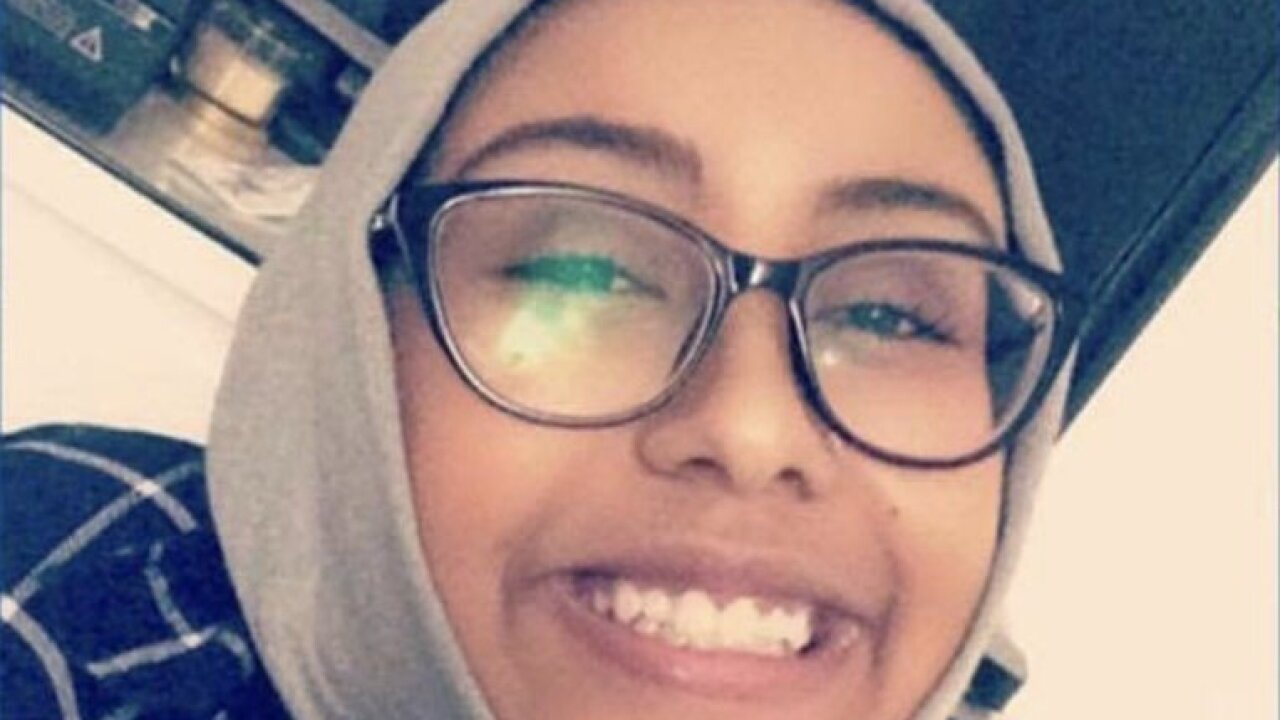 A Muslim teenager is missing and believed dead after she was abducted by a man as she and her friends were walking to a suburban Virginia mosque for Ramadan prayers, police said. A body of a young woman, who authorities believe to be Nabra Hassanen, 17, was found Sunday, June 18, 2017, in a pond in Sterling, Virginia, police said.

A body of a young woman, who authorities believe to be Nabra Hassanen, 17, was found Sunday in a pond in Sterling, Virginia, police said.

The same day police arrested a 22-year-old Sterling man after a traffic stop and charged him with her murder, said Tawny Wright, spokeswoman for Fairfax County Police.

Around 4 p.m. Fairfax County Police said the case appeared to be a result of road rage involving the suspect. Police added they do not believe race or religion played a role in the murder.

Authorities are waiting for the medical examiner to make a final determination of the girl’s identity and how she died before releasing her name, Wright said.

But a statement sent to CNN from the Virginia Lt. Governor’s office said that “detectives and relatives believe the body found is Nabra Hassanen.”

A Muslim teenager is missing and believed dead after she was abducted by a man as she and her friends were walking to a suburban Virginia mosque for Ramadan prayers, police said. A body of a young woman, who authorities believe to be Nabra Hassanen, 17, was found Sunday, June 18, 2017, in a pond in Sterling, Virginia, police said.

While the episode has shaken the local Muslim community, Fairfax police say they are not investigating the girl’s killing as a hate crime.

Wright told CNN that “detectives didn’t receive an indication during their interviews” that the attack was a targeted or racially biased incident.

Friends were walking to mosque for Ramadan

Police began searching for the girl around 4 a.m. Sunday after they received reports from a group of teenagers saying their friend was missing, Wright said.

The teens told police they’d been walking from a McDonalds to the All Dulles Area Muslim Society (ADAMS) Center for Ramadan prayer when they ended up in a dispute with a man driving in a car, Wright told CNN.

The mosque holds several prayers throughout the night during the celebration of Ramadan, according to Tajul Islam, a receptionist at the ADAMS Center. The group of friends had left the mosque to eat at the McDonalds before the next fast began when they were attacked.

The man allegedly got out of the car and assaulted the 17-year-old girl as her friends ran to the mosque, where they called police, Wright said.

Darwin Martinez Torres, 22, was taken into custody as a suspect in the case and subsequently charged with murder, Wright said.

Torres couldn’t be reached for comment and CNN could not determine if he has retained a lawyer.

Detectives found the body, thought to be the girl’s, in the pond around 3 p.m. Sunday.

Father: ‘This is a hate crime’

On Monday, Nabra’s friends gathered outside her Reston, Virginia, apartment with flowers. In another apartment her father, Mahmoud Hassanen, grieved with other friends and neighbors while her mother mourned separately several doors away.

More than 40 Muslim families live together in the quiet Cedar Ridge apartment complex.

Hassanen, Nabra’s father, told CNN that his daughter was a warm and giving person.

“She loved everybody,” he said. “She liked to help other people.”

Hassanen said he immigrated from Egypt in 1987 and that he is an American citizen. He said he asked police why the suspect killed his daughter but they wouldn’t comment on a potential motive.

And while police say they’re not investigating the attack as a hate crime, Hassanen believes that’s exactly what it was.

“This is a hate crime,” he said. “It’s racism. Getting killed because she’s Muslim.”

“I feel sorry for the guy who take my daughter’s life,” he said. “Why? We have to help each other.”

Although the killing has not been officially declared a hate crime, its timing — coming amidst a recent spike in attacks on Muslims — has raised concerns in the Muslim community.

Ibrahim Hooper, spokesperson for the Council on American Islamic Relations, told CNN that his organization will be calling for a thorough investigation of a possible biased motive.

“We’d like to hear from the witnesses to the initial attack as to whether they heard any biased statements,” Hooper said. “Even if not, why is this individual targeting a group of people dressed in Muslim attire?

“Would they have been targeted if they hadn’t been of a certain faith or ethnicity? These are the kinds of questions we ask,” he said.

The attack happened hours before a man drove a van into a crowd of worshipers at a mosque in London.

“We are devastated and heartbroken as our community undergoes and processes this traumatic event,” said the ADAMS Center in a statement. “It is a time for us to come together to pray and care for our youth.”

A crowdfunding campaign for the girl’s family has already raised more than $170,000.