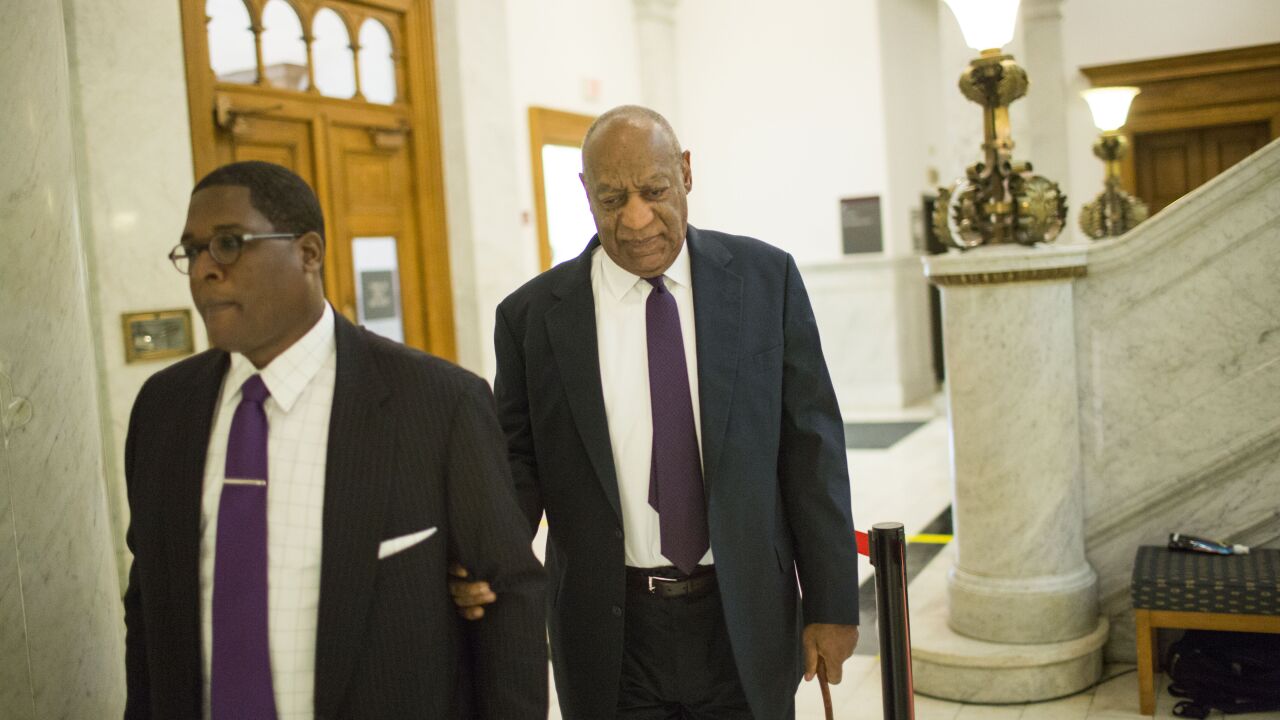 Actor Bill Cosby (R) arrives at the Montgomery County Courthouse on June 6, 2017 in Norristown, Pennsylvania. Bill Cosby’s trial for sexual assault opened June 5, 2017 in Pennsylvania with tearful testimony from one of his alleged accusers as prosecutors painted the megastar turned pariah as a sexual predator who established trust with younger women before incapacitating them with drugs and wine. / AFP PHOTO / POOL / EDUARDO MUNOZ ALVAREZ (Photo credit should read EDUARDO MUNOZ ALVAREZ/AFP/Getty Images)

Defense attorneys will continue to try to poke holes Wednesday in the testimony of the former Temple University employee who accuses Bill Cosby of drugging and assaulting her in 2004.

Andrea Constand, director of operations for the Temple women’s basketball team from 2001 to 2004, testified Tuesday that Cosby befriended her and took an interest in her career. At his home one evening in 2004, he pressed her to take three blue pills, which he said were herbal and would help her relax, she testified.

“Put them down. They’re your friends. They’ll take the edge off,” she recalled Cosby, then a powerful Temple trustee, telling her. “I said, ‘I trust you.’ I took the pills, and I swallowed the pills down.”

Shortly after, she told him she had become “frozen” and incapacitated, she testified. Cosby then laid her on the couch and assaulted her sexually, she alleged.

“I felt really humiliated and I was really confused,” Constand said, wiping tears from her eyes. “I just wanted to go home.”

Cosby faces three counts of aggravated indecent assault in the Montgomery County Courthouse near his suburban Philadelphia home. The 79-year-old actor and comedian has pleaded not guilty.

Deposition will be Cosby’s testimony

Constand’s testimony represents the first time she has spoken out publicly about the 2004 incident. Cosby, who has said he does not plan to testify, repeatedly lowered and shook his head as she spoke.

The dramatic scene was more than a dozen years in the making. Constand initially told police about the incident in 2005, but the then-district attorney declined to press charges against Cosby. She sued in civil court, and Cosby settled the case in 2006.

The deposition Cosby provided in that civil suit, in which he admitted to many of Constand’s allegations, is central to the case against him. Cosby’s attorneys have said the pills he gave Constand were Benadryl and that their sexual activity was consensual.

Defense attorneys have pointed to inconsistencies in Constand’s testimony and questioned why she waited a year to report the alleged assault to police.

On cross-examination Tuesday, Constand conceded that some things she initially told police — her assertion she had not been alone with Cosby before the alleged assault, for example — were incorrect.

“I was mistaken,” Constand said. “It was a lot of confusion putting a lot of dates together.”

Her cross-examination is expected to continue Wednesday.

Cosby has been accused of assault by dozens of women, but the charges in this trial deal solely with Constand’s accusations. One other accuser, Kelly Johnson, was allowed to testify as prosecutors sought to establish that Cosby’s alleged assault was part of a pattern.

Johnson, a former assistant at the William Morris talent agency, testified Monday that in 1996 Cosby pressured her to take a pill that left her largely incapacitated. Cosby then engaged in sexual activity with her when she could not resist, she testified through tears.

Johnson’s mother, Patrice Sewell, also testified to receiving a call from her “hysterical” daughter, who told her that Cosby had assaulted her and tried to have her fired from William Morris. A William Morris attorney at the time testified he recalled Johnson alleging Cosby abused her during a workers’ compensation claim.

The defense has argued Johnson was fired for other reasons, including violating the company policy on dating clients.

Cosby starred in “Fat Albert and the Cosby Kids,” “I Spy” and “The Cosby Show.” Through the latter he turned the lives of an upper-middle-class African-American family into a groundbreaking TV sitcom.

His sweater-wearing portrayal of Dr. Cliff Huxtable made him a household name and one of the most beloved comedians in the world. In later years, Cosby became somewhat of a public moralizer, speaking out against what he saw as the failings of the African-American community in raising children.

Cosby is facing a jury of seven men and five women. Two jurors are black. The jurors, who were selected in Allegheny County in an effort to ensure a fair trial, will be sequestered in the criminal trial for about two weeks, the lawyers in the case have predicted.