Portland stabbing suspect yells in court: ‘Get out if you don’t like free speech’ 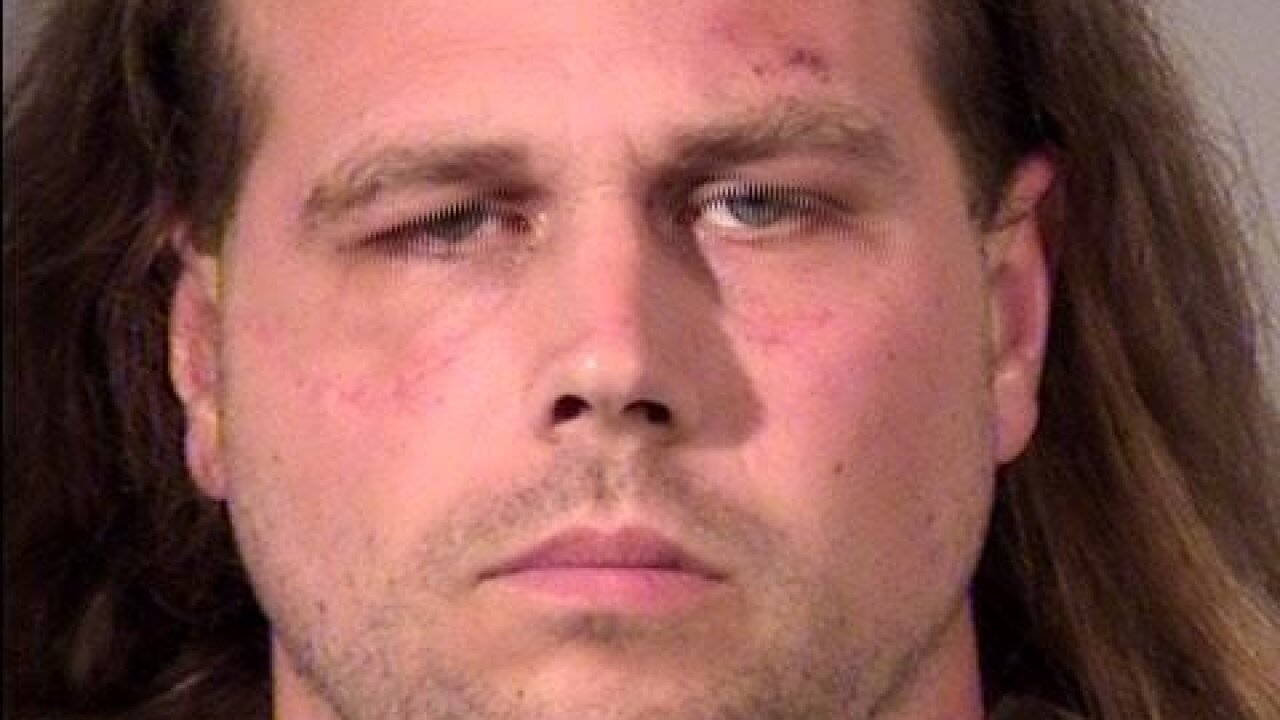 Portland Police confirm that on 5/27 suspect Jeremy Joseph Christian was arrested in the MAX train stabbing that left two persons dead, and one injured. Jeremy Joseph Christian, age 35, was booked into the Multnomah County Jail at 5:12aE on 5/27. He is charged with two cases of aggravated murder, one case of attempted murder, two cases of second degree intimidation (threating a person because of their race, color, religion, or sexual orientation), and one case of felony possession of a restricted weapon.

Jeremy Joseph Christian began yelling as soon as he walked into the courtroom Tuesday.

Portland Police confirm that on 5/27 suspect Jeremy Joseph Christian was arrested in the MAX train stabbing that left two persons dead, and one injured.

“Get out if you don’t like free speech,” he said, and “You call it terrorism, I call it patriotism. You hear me? Die.”

Christian, 35, is accused of fatally stabbing two men who defended a 16-year-old and her Muslim friend on a Portland, Oregon, train last Friday. He was yelling racial and religious epithets that day, police documents say.

Two deputies flanked Christian — listed as 6-foot-3 and 250 pounds in court documents — during the brief court hearing. He wore a blue jail jumpsuit and didn’t say anything other than to yell slogans, including “Death to the enemies of America. Leave this country if you hate our freedom.”

He was arraigned on several charges, including two counts of aggravated murder, attempted murder, two counts of second-degree intimidation and being a felon in possession of a restricted weapon, police say.

His next court appearance will be June 7. A Multnomah County grand jury will convene in the coming days to consider additional charges.

The aggravated murder charges carry a maximum penalty of death. Oregon has not executed a prisoner in more than two decades.

He has previous convictions from 2002 on state charges of robbery, kidnapping and unlawful use of a dangerous weapon, and a 2011 conviction on federal charges of felon in possession of a firearm, court documents show. His sentences in those cases were not immediately available.

In September 2002 he was charged with unlawful use of a weapon for having a sap — a pink sock with two hard balls — while in the Multnomah County Detention Center and sentenced to 13 months imprisonment and 24 months probation, documents said.

Christian “reports he is transient and does not know the last time he had a permanent address,” the documents said.

‘We should just kill ourselves’

Destinee Mangum, 16, told CNN affiliate KPTV that she and her friend, who was wearing a hijab, were on the MAX light-rail train Friday when Christian confronted them with several hateful remarks.

“He told us to go back to Saudi Arabia and he told us we shouldn’t be here, to get out of his country,” Mangum told KPTV. “He was just telling us that we basically weren’t anything and that we should just kill ourselves.”

Destinee and her friend moved to the back of the train. A stranger intervened, telling Christian he couldn’t disrespect the girls in such a way, she said. Christian began arguing with several men.

“Me and my friend were going to get off the MAX and then we turned around while they were fighting and he just started stabbing people,” she told KPTV. “It was just blood everywhere and we just started running for our lives.”

Several passengers chased after the suspect and called 911, directing officers to his whereabouts, according to local media.

In all, Christian stabbed three men. Only Micah Fletcher, 32, survived. He showed up at Christian’s court hearing Tuesday, arriving not long after the defendant left the courtroom.

While Fletcher was recovering in the hospital, he told the investigators that Christian yelled racial and religious epithets on the train and threatened to decapitate people, according to the police affidavit of probable cause. The affidavit said cell phone video also showed Christian stabbing the men and yelling epithets.

Another incident the day before?

Video obtained by CNN affiliate KOIN shows that Christian was involved in similar behavior on a MAX train only one day before he was accused of fatally stabbing Ricky John Best, 53, of Happy Valley, and Taliesin Myrddin Namkai-Meche, 23, of Portland.

Recorded by a woman who asked to be identified only as KK, the video shows Christian on a train late Thursday, aiming pejoratives at a conductor.

“It looks like we have a Christian or Muslim (expletive) bus driver. I’ll stab you, too, (expletive),” he said.

KK told KOIN he was upset, complaining about the city and “venting to his friend on the phone about some girl that just pepper-sprayed him.” He was complaining about Muslims, Christians and Jews — saying they should burn at the stake and “f**ing die” — something she’d never heard before on Portland’s MAX trains, she told the station.

“The talking was so violent and everybody was pretty scared,” KK said. “He was talking about wanting to stab somebody and gestured to pull something out of his pocket. Everybody around me got up. I was right behind him.”

‘Definitely looking for a fight’

KK eventually got up and move to the other side of the train, she said. The next day, when she heard about the train stabbings, she immediately thought of the video she had taken of Christian.

“That was the first thing that popped into my head, ‘I wonder if it’s the same guy from the night before,'” she said. “I felt that he was definitely looking for a fight of some sort that evening.”

Portland police spokesman Pete Simpson confirmed that the man in the KOIN video is Christian. Simpson also said that Christian was maced the day before the deadly attack. The incident is part of a larger investigation and he didn’t have further details, he told CNN.

“I don’t know that officers came in contact with him that night,” Simpson said.

Police are examining Christian’s background, “including the information publicly available about the suspect’s extremist ideology,” they said in a news release. Videos have surfaced showing Christian shouting at people, at one point saying the N-word, as police officers separated him.

The grand jury should convene by next Tuesday, he said, and Christian will be presented with any indictments at his next court appearance.