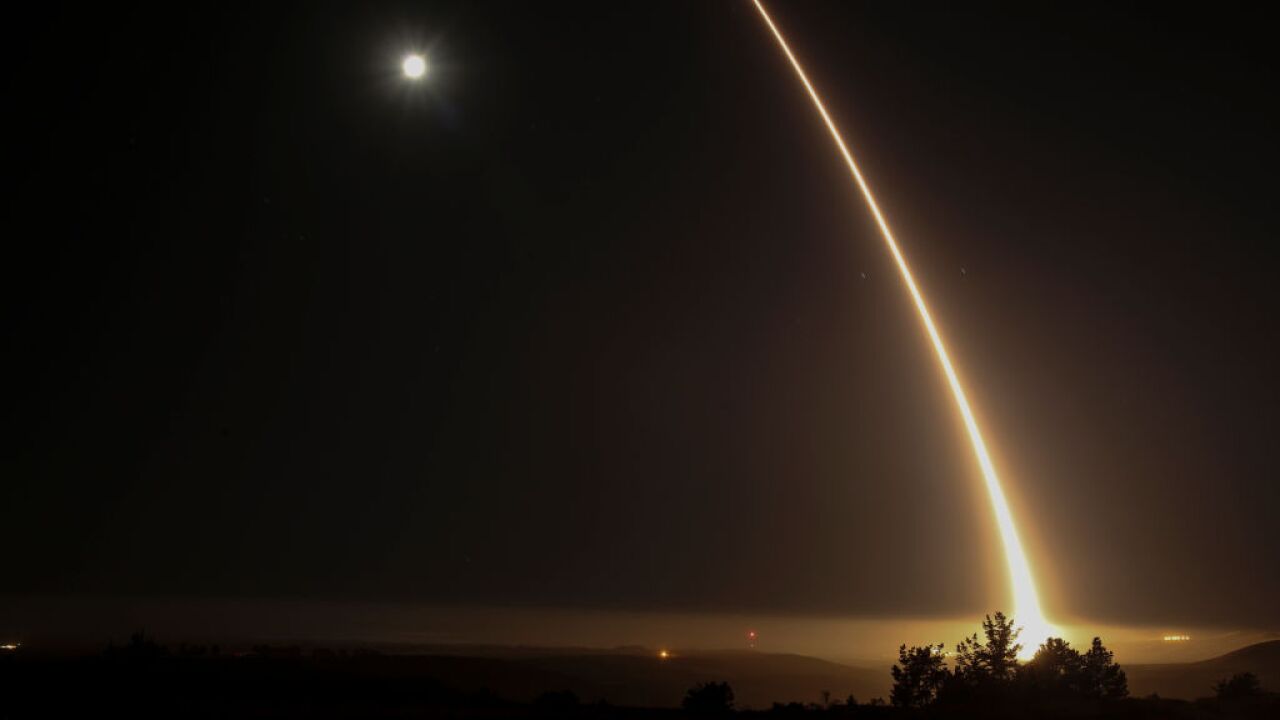 TOPSHOT – A streak of light trails off into the night sky as the US military test fires an unarmed intercontinental ballistic missile (ICBM) at Vandenberg Air Force Base, some 130 miles (209 kms) northwest of Los Angeles, California early on May 3, 2017. / AFP PHOTO / RINGO CHIU (Photo credit should read RINGO CHIU/AFP/Getty Images)

The Pentagon on Tuesday will for the first time test its ability to shoot down an intercontinental ballistic missile using its own upgraded long-range interceptor missile in what is being widely seen as a test of US ability to counter a North Korean missile launch.

The test, which will take place in the skies over the Pacific Ocean, comes just two days after Pyongyang fired a short-range ballistic missile that traveled an estimated 248 miles, splashing down within Japan’s exclusive economic zone.

In a Monday tweet, President Donald Trump joined the leaders of South Korea and Japan in condemning the test, saying that North Korea had “shown great disrespect” for China by “shooting off yet another ballistic missile.”

North Korea has shown great disrespect for their neighbor, China, by shooting off yet another ballistic missile…but China is trying hard!

The Pentagon insists the long-planned test of its ground-based interceptor system is not solely about North Korea, and the test is aimed at being able to challenge any threatening intercontinental ballistic missile, including possibly from Iran in the future.

TOPSHOT – A streak of light trails off into the night sky as the US military test fires an unarmed intercontinental ballistic missile (ICBM) at Vandenberg Air Force Base, some 130 miles (209 kms) northwest of Los Angeles, California early on May 3, 2017. (RINGO CHIU/AFP/Getty Images)

That test involves firing a new version of the military’s single long-range ground-based interceptor missile, which is currently based in Alaska and California. That program has also been in existence for more than a decade but only about half of the tests have been successful, according to the Defense Department. US officials often call it a high-speed effort to hit a bullet with another bullet.

In the most recent Pentagon report examining weapons testing across the Department of Defense, this long-range system was criticized, saying it “demonstrates a limited capability to defend the US homeland from small numbers of simple intermediate-range or intercontinental ballistic missile threats launched from North Korea or Iran.”

The report went on to say the Defense Department continues to discover new failure modes during testing.

Tuesday’s test, an interceptor missile will be launched from Vandenberg Air Force Base in California and attempt to intercept a simulated threat missile over the Pacific Ocean launched from Kwajalein Atoll in the Marshall Islands. This will be the first test of the interceptor using an upgraded “kill” vehicle — the part of the missile that would hit an incoming warhead.

Last week, Director of National Intelligence Dan Coats told Congress, “North Korea is an increasingly grave national security threat to the United States because of its growing missile and nuclear capabilities combined with the aggressive approach of its leader Kim Jong Un. Kim is attempting to prove that he has the capability to strike the US mainland with a nuclear weapon.”

Sen. John McCain, the chairman of the Senate Armed Services Committee, said in an interview Sunday that it would not be acceptable for North Korea to acquire an intercontinental ballistic missile, saying the US should not be reliant solely upon missile defense to ward off the threat.

“I don’t think it’s acceptable for the United States of America to have an intercontinental ballistic missile — or a missile aimed at Australia — with a nuclear weapon on it, and depend on our ability to counter it with an anti-missile capability,” McCain told Australia’s ABC.

He added that and that the situation on the Korean Peninsula had the potential to mirror the Cuban Missile Crisis unless Pyongyang is curbed, calling on China to do more.