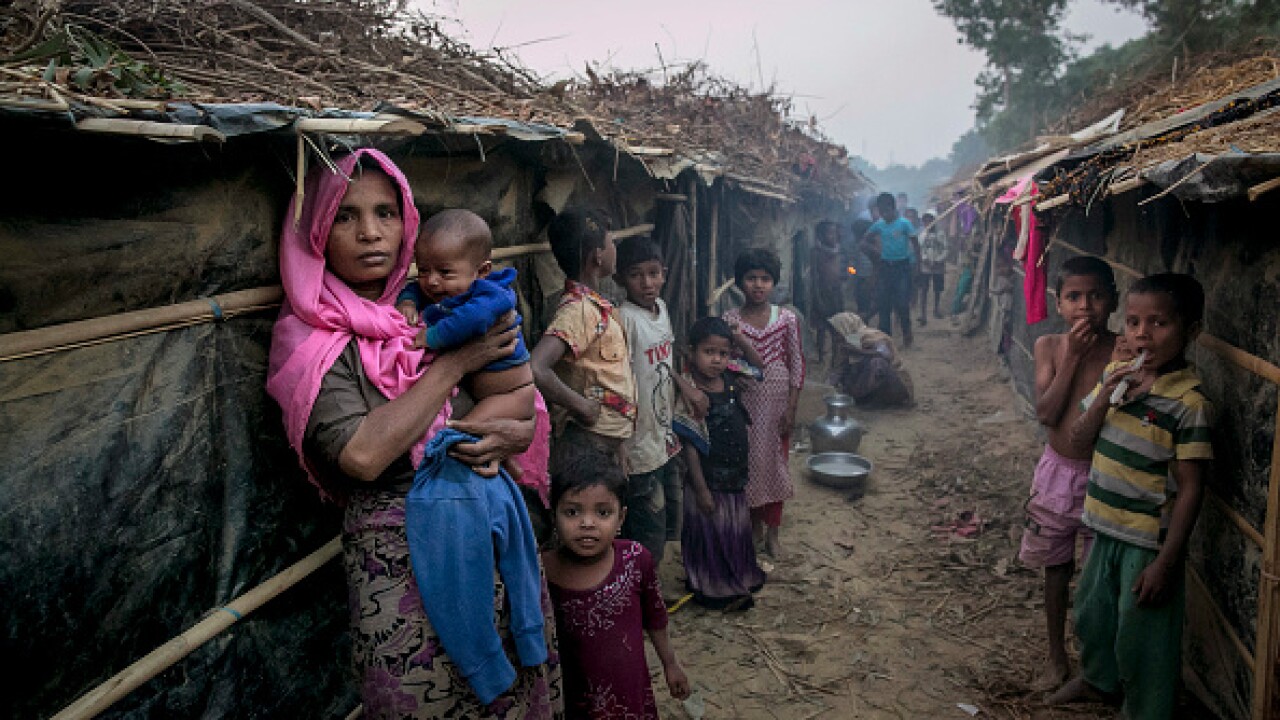 COX’S BAZAR, BANGLADESH – FEBRUARY 8: People stand outside their shelters in Kutapalong Rohingya refugee camp on February 8, 2017 in Cox’s Bazar, Bangladesh. The United Nations estimates about 69,000 Rohingya Muslims have fled to Bangladesh from Myanmar since October last year after the Burmese army launched a campaign it calls ‘clearance operations’ in response to an attack on border police. Based on reports, Bangladesh plans to proceed with a controversial plan to relocate tens of thousands of Rohingya refugees from Myanmar to a remote island in Bay of Bengal, despite warnings it is uninhabitable and prone to flooding. Waves of Rohingya civilians have fled across the border since last year, most living in makeshift camps and refugee centers with harrowing stories on the Burmese army committing human-rights abuses, such as gang rape, arson and extrajudicial killing. The Rohingya, a mostly stateless Muslim group numbering about 1.1 million, are the majority in Rakhine state and smaller communities in Bangladesh, Thailand and Malaysia. (Photo by Allison Joyce/Getty Images)

Officials have organized 3,800 relief centers ahead of the storm, which on Monday evening was churning in the Bay of Bengal and heading towards the coastline. Residents were seeking shelter in schools and other safe buildings in 17 coastal districts, Hashim said.

Mora is forecast to make landfall near the southeastern tourist city of Cox’s Bazar and the seaport city of Chittagong, the Bangladesh Meteorological Agency said.

Mora is the equivalent of a strong tropical storm and will bring winds around 100 kilometers per hour as it moves onshore, said CNN meteorologist Taylor Ward. A more significant problem than the winds will be the potential for flooding — from storm surge and heavy rainfall, he said.

“The coastline of Bangladesh is very low-lying and is prone to storm surge problems,” Ward said. “Additionally, tropical cyclones in the region bring extremely heavy rainfall which often turns deadly in the densely populated areas.”

The country’s two main seaports in Chittagong and Mongla have suspended container handling, and river transports across Bangladesh have been suspended.

With about 700 kilometers of coast line, Bangladesh is exposed to cyclones and is often battered by deadly storms.