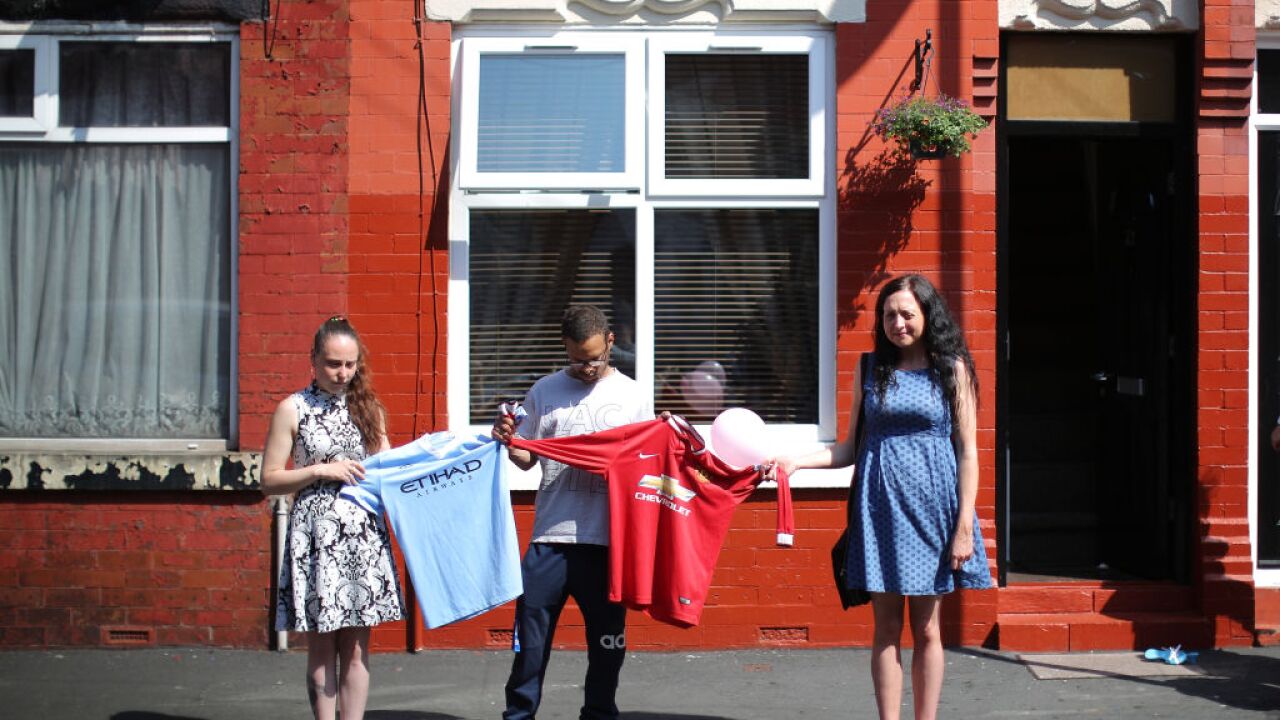 MANCHESTER, ENGLAND – MAY 25: Residents of Lindum Street, Moss Side hold Manchester City and Manchester United football shirts as they observe a minutes silence in memory of the victims of the Manchester bomb attack on May 25, 2017 in Manchester, England. An explosion occurred at Manchester Arena on the evening of May 22 as concert goers were leaving the venue after Ariana Grande had performed. Greater Manchester Police are treating the explosion as a terrorist attack and have confirmed 22 fatalities and 59 injured. (Photo by Christopher Furlong/Getty Images)

English soccer giants Manchester United and Manchester City have come together to donate £1 million ($1.3 million) to the emergency fund set up following Monday’s terror attack in the city.

It’s now been confirmed that 22 people — including children — were killed in the bomb blast at an Ariana Grande concert and a further 64 have been injured.

The hashtag #ACityUnited was created to show solidarity between Manchester’s two rival teams, boosting the ‘We Love Manchester Emergency Fund’ by £2 million in the past 24 hours. The fund is designed to help victims and families affected by the attack.

#MUFC and Man City have come together to pledge £1 million to the We Love Manchester Emergency Fund: https://t.co/0djf4nwBcd #ACityUnited pic.twitter.com/W6ttah2rwx

“We have all been humbled by the strength and solidarity shown by the people of Manchester in the days since the attack,” said Manchester City chairman Khaldoon Al Mubarak.

“The hope of both our clubs is that our donation will go some small way to alleviate the daunting challenges faced by those directly affected and that our acting together will serve as a symbol to the world of the unbreakable strength of the spirit of Manchester.”

Along with the help of local news organization the Manchester Evening News, the emergency fund total now stands at over £3 million.

“Our clubs are right at the heart of our local communities in Manchester and it is right that we present a unified response to this tragedy.

“The money will help, of course but the work of the two clubs and their respective foundation and community scheme can build on the fantastic spirit that Mancunians have shown in the immediate aftermath.”

On Wednesday, United beat Ajax to win the Europa League final, a victory that Paul Pogba and Jose Mourinho dedicated to the people of the city.

You can donate to the fund at www.redcross.org.uk/manchester.